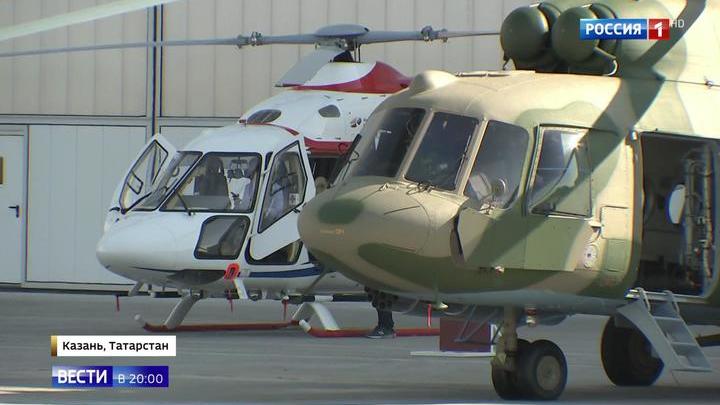 Today, Vladimir Putin has seen how Russian bombers are manufactured. For dozens of years, General Staffs of various states haven't been able to find a way to counteract them. The president visited the Gorbunov Aircraft Factory in Kazan a branch of Tupolev, LLC. The head of the state held a meeting with the representatives of the Defense Ministry and the defense industry. It was held in a new format: on the airfield and in the shops instead of the confined space of the conference hall.

Dmitry Petrov with the details.

The airfield of the Kazan aircraft factory presents the entire spectrum of Russia's long-range and strategic aviation. The president approaches the Tu-22M3M bomber. Last summer, it's been fundamentally modernized and entered the phase of land and flight tests. The veteran of strategic aviation Tu-95MS is right next to it. Next, the Tu-160 variable wing geometry supersonic missile carrier.

Almost 1.5 years ago, in January 2018 Putin visited the Kazan aircraft factory. Back then, he got to see the missile carrier in action. And signed the state contract for ten more Tu-160. Each costs fifteen billion rubles. That'll keep the facility busy for the next ten years. 165 feet of grace and might.

The final assembly shop is upgrading the White Swans three Tu-160. After the work is done, they'll become Tu-160M meaning "modernized." Onboard equipment, power supply, navigation, and steering systems are being replaced. According to the schedule, they must be airworthy already this year.

Today, the president is meeting with the aircraft builders once again. And he's got good news for them, there will be even more work.

"Our factory is working at 100% of its capacity. We have a grand program, as you can see. Our staff has confidence in the future and is confidently making plans for the next decades".

Vladimir Putin: "The way it should be. In early 2018, we signed a contract for ten new aircraft. Another ten Tu-160 will get upgraded. We can make it more than ten, you know. I've been talking to the Defense Minister. Bearing in mind the fact that Tu-160 is a new aircraft with a vast range of capabilities required by our Ministry of Defense, the Ministry doesn't exclude the possibility of the future expansion of the contract, so you'll have enough work".

The history of the Kazan aircraft factory dates back to 1927. Over a couple of years, a swampy wasteland was turned into an aircraft manufacturing facility. In 1945, it began manufacturing the Tu-4 bomber the first Soviet nuclear weapon carrier. Under the leadership of the famous aircraft designer Vitaly Kopylov, the Kazan facility began producing the Tu-160 missile carriers. Back then, the USSR was at the peak of its power but it still was a true labor feat.

Vladimir Putin: "It will perpetuate the memory of the outstanding director and aircraft designer the former director of the facility Kopylov. We've built a monument. I'd name an aircraft after him. He did a lot for his country. The republic was helping during those dire years. They were supplying food to feed the workers".

The collapse of the USSR was the darkest period in the history of the factory. There were no contracts and the production stopped. The shops were empty.

What the factory is doing now after 25 years of basically standing idle is also a professional feat of sorts. The Kazan factory has fully restored the production of the center section. It's the key load-bearing part of an aircraft, basically its backbone. As a matter of fact, it'll be a new factory. The facilities will be located both in old buildings and in new shops.

Alexey Tatarov, head of welding shop: There were two of us when we arrived here myself and the person I chose to be my deputy.

Vladimir Putin: "You know what's great about it? The fact that all machines were made in Russia. The Russian machine tool industry has been basically restored from scratch. And now, the heads of the facility report that 54% of the market is ours. The quality is great as well".

There are a lot of young employees. They've got an interesting job building aircraft and a decent average paycheck of 54,000. Professional growth is very quick. In a couple of years, the recent graduates of aircraft building colleges are ready to mentor new employees. Today, they invited the president to the World Vocational Tournament.

- We'd like to invite you to the opening of the WorldSkills 2019 tournament.

Vladimir Putin: I'll only be a mere spectator. I'm far less skillful than you are.

Today, Putin also got a chance to inspect the new helicopters. The Mi-38T paratrooper carrier has already received an appraisal from the Airborne Forces and will soon be tested. Mi-8NTV and a series of the Ansat light multipurpose passenger and medical helicopters. The Tu-214 liner was also demonstrated to the president. It was being developed in cooperation with Tupolev since the mid-1990s.