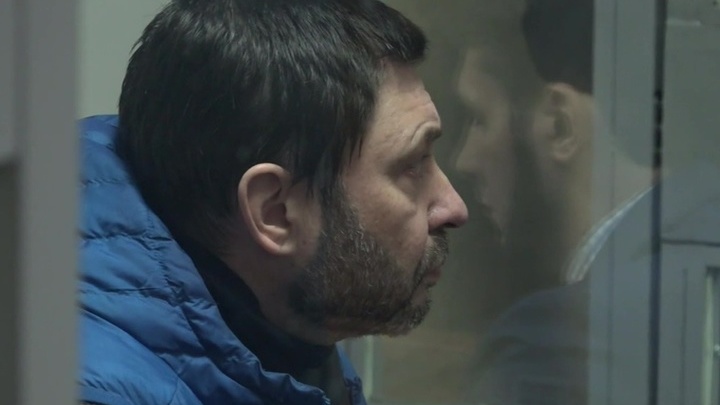 An action of solidarity with our colleague Kirill Vyshinsky was held today in Moscow outside of the Ukrainian embassy. He was arrested in Ukraine exactly one year ago. The journalist is accused of treason. The investigation is still ongoing.

Now, our correspondent Yulia Shustraya will join us. She is near the embassy right now.

- Hello, Yulia. As far as I can see what's going on behind you, the action is over. What was it like?

- Hello, it was pretty active.

The event was attended by top journalists and simply activists who were ready to support the petition in support of Kirill Vyshinsky and that he should be released. The journalist has been under investigation in Ukraine for a year already. Since then, the investigation hasn't moved an inch in any direction as far as we can tell. It's hard to say what is going on within the investigation because even his lawyers are reluctantly admitted to him. Here, at the embassy, people gathered with various posters, including posters with slogans such as "Freedom for Vyshinsky" and "Determination for Vyshinsky". Also, there were posters with the question "Is this Europe?" [in Ukrainian] and there were hand-drawn posters. Since the previous action, the participants have gotten even better prepared. It's clear that if Vyshinsky isn't released, such actions will continue to take place.

The organizers stress the main thing now is to support Kirill so that he will have the strength to keep going.

Olga Skabeyeva, journalist: "Kirill, hold on, please. As for the Ukrainian authorities — if we can assume to some extent that the new Ukrainian administration can bring change to the Russia-Ukraine relationship, very few believe in that, but if we can assume that, then it would be an act of goodwill and the first sensible step to release Kirill, because he's in prison for nothing, he's in prison for the truth, and all of this is just revenge for the truth."

Let me remind you Kirill Vyshinsky, the former chief editor of RIA Novosti, Ukraine, is accused of state treason. After he covered the events in Crimea and Donbass, he was arrested and charged with this. Then, the investigation started advancing, and Kirill faced even more charges. In this regard, in the winter, here, near the Ukrainian Embassy in Moscow, an action was held under the slogan "this is a trumped-up charge". The participants even brought a huge trumpet symbolizing the obviousness of the whole situation developing around Vyshinsky. This, the new policy, and the new administration were talked about a lot at the event today.

Dmitry Kiselyov, director of Rossiya Segodnya: "The new Ukrainian administration should release him. They shouldn't hold this shameful trial. We are giving a sincere and serious signal to the Ukrainian authorities that it would be great if they could give relations with Russia a fresh start."

The chance of giving a fresh start in regard to Vyshinsky's case was given to Vladimir Zelensky. More than 250 Russian journalists signed a petition for the new president, requesting that Kirill Vyshinsky be released, and they hope they will be heard.

Evgeniy Revenko, State Duma Deputy: "This is an unprecedented case. This is a disgraceful episode in the history of Ukraine. We ask and demand from Vladimir Zelensky that he take all measures to release our friend Kirill Vyshinsky".

Every one of the participants of the action hopes that they won't have to repeat it again and that next time they gather will be to welcome their colleague. Let me remind you that after the prosecution against Kirill Vyshinsky started, he renounced his dual citizenship. Earlier, he had had dual Russian and Ukrainian citizenship. Now he considers himself solely a citizen of Russia.

- Thank you, Yulia. That was Yulia Shustraya's report on the action of solidarity with our colleague Kirill Vyshinsky that was held in Moscow.