Top Pundit Kiselev: Iran is a Powder Keg With Sparks Raining on It! War is On the Horizon! 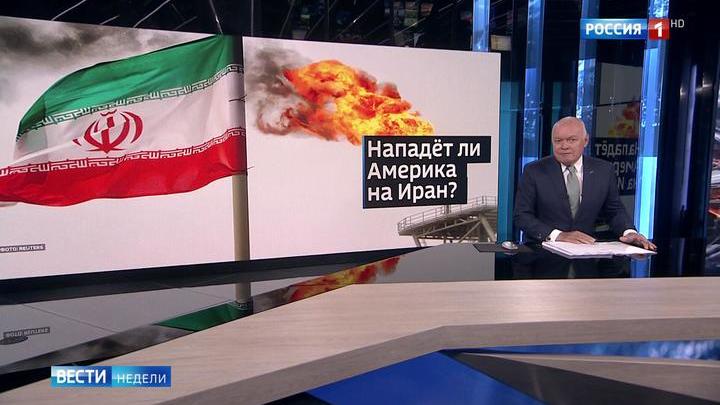 And now, Iran. The situation is like a powder keg with sparks raining on it. It's extremely dangerous for the entire world. The United States started this conflict when last year it withdrew from the nuclear deal with Iran for no reason. The States did that individually, opposing the will of their NATO allies and ignoring the warnings by Russia and China. They just didn't give a damn. After that, President Trump imposed illegitimate sanctions against Iran and earlier in May, banned every country on our planet from purchasing oil, steel, copper, and aluminum from Iran. In response, Iran threatened to cancel the restrictions on its nuclear industry that it voluntarily adopted before.

Trump decided that he was offended and dispatched a seven-warship armada to the Iranian coast. They're already there and ready for action. Let's name them. The aircraft carrier USS Abraham Lincoln. It's capable of carrying up to 90 jets and helicopters. Two American destroyers have directly entered the Persian Gulf, the USS McFaul and the USS Gonzalez. Both of those ships carry 90 Tomahawk cruise missiles. The USS Kearsarge amphibious assault ship is at the entrance of the Persian Gulf. It's capable of carrying up to 30 jets and helicopters including the F-35B advanced fifth-generation fighter jets. The USS Arlington amphibious transport dock was dispatched to the same region. It's capable of carrying up to 800 servicemen and 14 military vehicle units. The strike group also includes the USS Leyte Gulf guided-missile cruiser and the destroyer USS Bainbridge. To make the entire thing look like a coalition affair it also includes the Spanish frigate Mendez Nuñez. In addition, the Patriot air defense system has also been deployed to the region. The Pentagon explained that it's a necessary measure to reinforce the aircraft carrier group and the US Navy task force. That was the hardware.

Now, let's check what's being said. Trump declares that he hopes to avoid a war with Iran. That's great but then why is so much American hardware there? The Iranian leader, Ayatollah Ali Khamenei, also says that he's not going to fight the U.S. but will continue to resist its pressure.

Saudi Arabia is also discussing the possible war. Right now, it's the U.S.'s main ally in the region. Saudi Foreign Minister Adel Al-Jubeir says that Riyadh doesn't want a war in the region and will make an effort to prevent it. However, Saudi Arabia will respond, I quote "with all of its strength and resolve, if the other country chooses war". As we see, all three, the U.S., Iran, and Saudi Arabia, speak of war. They pronounce the word even though they add that they don't want war. That's a bad sign.

At the same time, the U.S. has been waging a psychological war against Iran at the highest level. For example, here's the way the American magazine "Newsweek" tells its readers of the Pentagon's plans.

"A Pentagon source told Newsweek that one of the options is a heavy guided-missile strike campaign in an attempt to lead Tehran to the negotiation table with Washington. It depends on the escalation of force. But no matter the bravado from Iran's side, when you get hit with 500 missiles every day, it degrades you, which is the objective. When your opponent is weak, you get more out of any negotiation".

Trump himself is sure that under such heavy pressure, Iran will be forced to begin negotiating with the U.S. Few share Trump's confidence. Anyway, Supreme Leader Ayatollah Ali Khamenei tweeted that there can't be any negotiations.

Ali Khamenei, spiritual leader of Iran: "No noble and wise Iranian would trade their strong points. Of course, no one among our wise men seeks negotiations".

In addition, Khamenei calls negotiations with America "poison" and adds that the U.S.'s current administration is even more toxic.

However, war requires a cause, or at least an incident, in order to start it. It needs a provocation, like a spark, and as I said in the beginning, the sparks are already raining.

Last Sunday, someone, it's unclear who exactly, attacked two Saudi tankers in the UAE's waters. There wasn't an oil spill because the tankers were empty. No one was injured. However, reports say that the tankers sustained structural damage. The attack was suspiciously gentle. The Emirates condemned the attack via its energy minister. It was also condemned by Egypt, Jordan, and Iran. But despite that, all of them, on the instructions by American intelligence, point fingers at Iran. "The means that Iran doesn't want peace."

In addition, unidentified explosive drones attacked two pumping stations on the Saudi oil pipeline. The allegiance of the drones is once again unclear. However, the Houthi, a movement supported by Iran, are being openly suspected.

The situation is so tense that fake news inevitably appears. In the Emirates, there were reports of seven tankers being blown up. Later, they were revealed to be fake.

Last Saturday, King Salman of Saudi Arabia announced three separate summits in Mecca due to the tension in their relationship with Iran. The members of the Cooperation Council for the Arab States of the Gulf, the League of Arab States, and the Arab Cooperation Council are invited to Mecca on May 30th. It's speculated that they'll discuss the Iranian threat and will make another attempt to proclaim the creation of a so-called Arabic NATO. They've already come up with the name of the US-supervised bloc: MESA which stands for "Middle East Strategic Alliance".

The bloc isn't guaranteed to be created; not everyone wants it and the differences between the potential strategic allies are far too great. But whether the U.S. and Saudi Arabia will fight Iran is the hottest question right now. Anyway, Commander of the Navy of the Islamic Revolutionary Guard Corps Alireza Tangsiri said back in April that Iran will close the Strait of Hormuz if Tehran won't be able to use it due to the U.S.'s sanctions. The threat is real. Back in 2012, Commander of the Iranian Navy Admiral Sayyari said that closing the Strait of Hormuz was, I quote, "easier than drinking a glass of water". Why the Hormuz Strait is vital becomes clear after even a fleeting glance at the map. Suffice to say that 40% of the world's maritime oil traffic goes through the strait. It's hard to say how Iran's actions would affect the world. But the U.S. seems to be ready to play with fire.

And what about Russia? Russia has already done everything possible on the diplomatic front, telling America, Europe, and Iran how dangerous an escalation would be. But will we get involved? Last Wednesday, President Putin gave a straight answer.

Vladimir Putin: “Russia is not a firefighting crew. We can't be saving everything that we have nothing to do with.