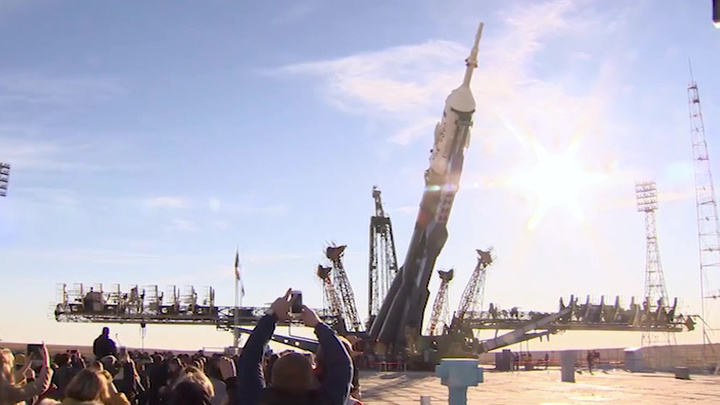 The Amur Gas Processing Plant will expand its construction personnel to up to 25,000 workers. Two lines will be launched in 2021. The plant will begin operating at its full capacity seven years from now.

Blagoveshchensk, the only major Russian city and regional center located right on the border. The Chinese city of Heihe is in 500 yards from here on the other bank of the Amur. But Blagoveshchensk is a Russian city. A ferry line operates during summertime, but Russia and China are building a bridge. And that's not the only bridge that the countries are establishing. They're also working on energy bridges.

A Special Report by Artyom Yamshchikov

The Amur Gas Processing Plant (GPP) will be the foundation of such a bridge on the Russian bank. It will be the largest in Russia and the second-largest in the world.

- What does running this construction mean for your career and you personally?

Artyom Yashin, Lead Engineer: "I joined the project during the development of the main technical solutions. Right now, when I watch the construction process, I feel proud of building such a facility.”

The plant is being built on the Chinese border. China will be receiving gas from the Chayandinskoye and Kovyktinskoye deposits which are rich with the useful components of ethane, propane, butane, and helium. But it's more profitable to sell them separately. According to the contract, China will be receiving only pure methane. The Amur Gas Processing Plant is being built in order to separate the gases. It's a large-scale project. Experts believe that it's responsible for the economic boom in the region. It's not an accident that the region was declared a territory of advanced economic development.

Its benefits can be utilized both by major companies and the local small and medium businesses. Hotels and cafes for guest specialists are already being built. As a result, the incomes of the population and the city budget are growing says Svobodny Mayor Vladimir Konstantinov.

- As far as I see, life in Svobodny is changing for the better?

- Booming? Well, in that case, I hope that the citizens can also feel the changes.

Vladimir Konstantinov, Mayor of Svobodny: "Last year, we cleared all of the city's debts with the money we received from tax yield including the tax yield from the Amur Gas Processing Plant."

The plant is being built in 12 miles from Svobodny. The first lines will be opened in two years so the work is going swimmingly. The longest phase was the preparation of the foundation. A large square was leveled among the knolls. Then, a road was connected to it.

The scale of the construction of the Amur Gas Processing Plant is shocking. The length of a single transfer line is over a kilometer. And there are six of them so the square of the entire construction site is around 200 acres. 3.5 Luxembourgs or more than a thousand soccer fields could easily fit in here.

The key equipment for the two transfer lines has already been installed at the site. Building the entire plant will require an enormous amount of concrete. This amount would be enough to build 170 concrete apartment buildings. The total required metal would be enough to build 23 Eiffel Towers. The main work still lies ahead says Eugeny Shilkin, Deputy Lead Engineer.

- The pillars are huge! What are their dimensions?

Eugeny Shilkin, Deputy Lead Engineer: "The demethanizer pillar is 260 feet high and has an internal volume of 53,000 cubic feet and weigh about 820 tons. The pillars were transported the way you see them. First, they arrived in Khabarovsk by sea. After that, they were strapped to towboats specifically designed to navigate rivers. A river fleet was built for this purpose. They traveled some distance along the Lower Amur to Blagoveshchensk. There, they were reloaded and transported to the harbor we'd built here along the Zea River."

Some sections of the riverbed had to be deepened to let the loaded boats pass. Unloading the equipment and installing it was a true challenge. The equipment is not only gigantic but also extremely complex. It's the most advanced in the world. It will ensure the high quality of the raw gas processing.

Eugeny Shilkin: Here, we'll have a facility that purifies and dries natural gas.

- Right, that one. Next, the gas goes to the block that we're standing on. It cools the gas down and initiates the separation process by separating methane. The ethane separation pillar is over there. And there's the helium purification facility.

Apart from balloons, which many people are familiar with, helium is used for a range of rather serious tasks. It's used in certain medical equipment, in the purification of metals, and as a rocket engine coolant in the space industry. For example, the Large Hadron Collider and MRis require helium in order to operate. The USA is the leader in the market but its reserves are depleting. Siberia has plenty of gas. The Amur plant will be producing a record amount, 2.1 billion cubic feet per year, which will allow Russia to outpace Qatar and perhaps even the United States. Valuable components are extracted from the gas by cooling it down inside these pillars.

Liquid helium is the coldest substance on Earth. It's record low temperature is close to the temperature of space, -452°F. Each facility has its own mode of operation. Their top and bottom sections can separate only particular components.

Those gases are invaluable for the chemical industry. Propane and butane serve as fuel. Ethane is used to make polyethylene. Apart from households, it's also used in automobile and medical equipment production.

Eugeny Shilkin: "The construction of a new facility, the Amur MCP, will begin this summer. We'll supply the gas to them".

But that will happen in the future. Right now, the Amur Gas Processing Plant has acquired the most advanced gas processing equipment says Lead Engineer Artyom Yashin. He's in charge of the construction. He claims that employees are everything, especially when installing, setting up, and launching facilities. The facility welcomes high-class specialists.

11,000 people are currently building the gas processing plant. Next year, the number of personnel should double. But those will mainly be temporary employees. After installing the equipment they'll hand it over to check-out specialists. They'll prepare the facility for launch. About 2,500 people will be working here during the operational phase. The city is already building a sub-district for the employees. It will accommodate everyone.

Andrey Belousov, Deputy Executive Manager: "It'll be a modern village. We're going to build five-story apartment buildings and 36 townhouses. We'll have our own clinic that will serve 220 adult and 70 child patients. In addition, we're going to build a middle school that can fit 1,100 students".

Yelena Chudakova showed us the spot where the school will be built. She's the staff recruitment manager. She claims that in order to attract high-class specialists it's important to create decent working and leisure conditions.

- As far as I see, there will be an entire complex of buildings and sports facilities and a school right on this spot. Is that true?

- This place has been selected because there's a boarding school nearby. In addition, there will be some kids' sports facilities.

- Yes, of course. The students of both schools will be able to use those sports facilities.

Yelena Chudakova; "We're launching a facility that utilizes complex, high-tech equipment. Naturally, this requires a high degree of competency. Only specialists who have worked many years in the gas processing industry possess the required level of competency. There are similar facilities in Russia. Such facilities are located in Orenburg, Astrakhan, Bashkiria, and Surgut. In order to attract those specialists, we need to create an appropriate environment. In fact, we're already working on it".

Specialists are selected based on their qualification. Apart from that, everyone is equal, claims Denis Cherenkov. He's an energy specialist in charge of heat supply. We met him in the boiler room.

Denis Cherenkov, Chief Energy Engineer: "I prepared a detailed resume mentioned all of my previous work experience and responsibilities as well as the equipment I could operate and sent it here. After some time, I received a call. — Mr. Cherenkov? — Yes? — Are you still looking for a job? — I am. I've been working here ever since. I came home and told my wife: "If I get hired, we'll have to move to the city of Svobodny in Amur Oblast in the Far East." The only thing my wife said was: "If you've checked everything and you're sure about it the kids and I will follow you to the end of the world".

And they followed. The family moved to Svobodny in Amur Oblast. Gazprom provided a two-bedroom apartment fully furnished and with all household appliances. Denis invited us to his home during his lunch break.

We're welcomed by his daughter Arina and a Labrador named Taffy.

Soon, his son, Bogdan, showed up.

While her mom is away, Arina is in charge of the household. She shows us the children's room. The Cherenkovs moved to Svobodny not so long ago. I ask her how she likes the city and her new kindergarten.

Denis Cherenkov: We attend hobby groups and a swimming pool. Yes, there's a pool here. It was built within the Gazprom for Kids program.

Gazprom is already thinking about prospects for the younger generation. The first school has a special class for the future specialists of the Amur Gas Processing Plant.

- Does your school have a Gazprom Class?

- Great. Thank you very much, bye!

Albina Storozheva, Principal: "They study advanced math, physics, information science, and chemistry. These are the subjects that they focus on".

- What is it? Technological-process automation. Could you explain what that is? What processes will you automate?

Excursions to the gas processing plant's construction site are part of the mandatory curriculum for these students and the students of the local vocational school. The latter is also preparing future Gas Processing Plant employees. Modern equipment has been installed in the school's laboratories. The school recently hosted the regional stage of the international vocational skills championship WorldSkills says Natalia Chernykh. She was one of the originators of the STEM study class.

Natalia Chernykh, Recruitment Manager: Those are the new vocations that weren't previously taught in Amur Oblast.

- Are they in demand?

- The most in-demand vocations are environmental lab technician, pump and compressor operator, and oil-processing operator. We believe that by 2019 we'll start hiring operating personnel. We'd like to fill some jobs with university and vocational school graduates.

- Do you mean the residents of this region?

That means the youth will have more reasons to stay in their home city because they have a guaranteed job in Amur Oblast at Russia's largest and the most advanced next-generation gas processing plant that will become not only the foundation of the energy bridge to Asia but also to many successful careers.