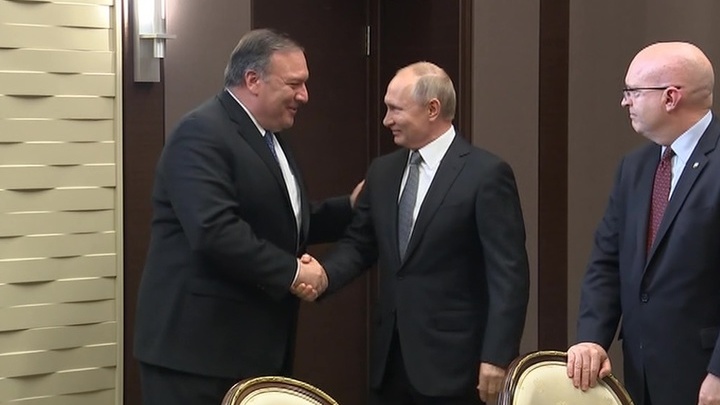 An opportunity to return to a full-scale dialogue between Russia and the US. That was the main topic of the meeting that was recently held in Sochi. The US Secretary of State arrived in Russia to meet with his counterpart.

That's the second time Sergey Lavrov meets with Mike Pompeo since the beginning of the month. After the meeting, they presented their press statements and shared the outcome with Vladimir Putin. They also discussed a series of international issues, Syria, Iran, and the Korean peninsula. The parties agreed that many issues affect the interests of both countries. I'd like to add that it's the first Russian visit of Mike Pompeo as the US Secretary of State.

Vladimir Putin: "Despite the exotic character of Mr. Mueller's work, he should be given credit for conducting what is generally an objective inquiry. He reaffirmed the lack of any trace of collusion between Russia and the current administration, which we described as sheer nonsense from the very start. There neither was nor could there be any interference on our part in the US elections at the government level. Nevertheless, that served as one of the reasons for the deterioration of our interstate ties. I hope the situation is changing today".

Mike Pompeo, US Secretary of State: "We have overlapping interests and matters in which we can be cooperative we can be productive, we can work together to make each of our two peoples more successful and frankly, the world more successful, too. President Trump asked me to travel here to communicate that as well as a couple of other ideas and projects. We can cooperate on North Korea, on Afghanistan, and on other issues. We can also talk about our strategic dialogue. I hope we'll get a chance to discuss that. The entire world would benefit from that".

Strategic stability issues were also on the agenda. The parties discussed the situation surrounding the INF Treaty from which the US is withdrawing and the START. According to Presidential Aide Yuri Ushakov, Moscow is ready to return to the pragmatic dialogue on arms control.

Yuri Ushakov, Presidential Aide: "We said that we expected the US administration to elaborate on Trump's idea of strategic stability. We expressed our disappointment with the US decision to withdraw from the Intermediate Nuclear Forces Treaty. We discussed the situation surrounding the START. As you know, the treaty expires in 2021. And if Washington doesn't specify its position in advance, we'll have to take all required measures in order to ensure our security and increase our defense capabilities. At the same time, our president stressed that we're ready to return to the regular pragmatic dialogue on all aspects of strategic stability and all aspects of arms control.