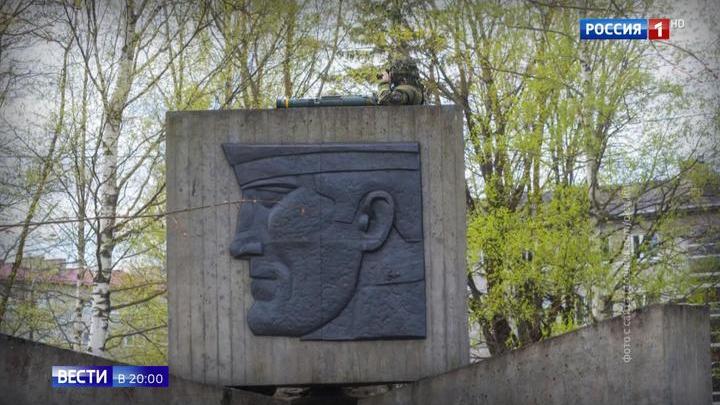 In the days before Victory Day in Estonia, a NATO soldier came into the limelight. He climbed the memorial to the soldiers who died fighting against fascists with a grenade launcher

In the days before Victory Day in Estonia, a NATO soldier came into the limelight. He climbed the memorial to the soldiers who died fighting against fascists with a grenade launcher. It happened in Sillamäeб where the training of the North Atlantic Treaty Alliance is underway.

Our European correspondent, Daria Grigorova, will cover the reaction of the locals.

Camouflage didn't help. A bomb-thrower, who made an ambush on a memorial to the fighters of the Great Patriotic War, was spotted immediately. The locals called the police right away. As it's not just a monument, there's a grave of fallen soldiers nearby.

Oleg Kultaev, Deputy in Sillamäe: "Several military people settled themselves near the memorial. One of them climbed on the memorial, to the very top. Actually, the locals were indignant. They were outraged by the training itself, which is conducted within the town's borders, and when this military man climbed the memorial, it crossed all lines, of course".

In the end, the police didn't punish the soldier that disrupted the peace of the grave. They concluded that his actions were not malicious. It's unknown which of 13 member countries the soldier represented. But the locals are sure that he wasn't a Russian-speaker.

"It's a total outrage... Before Victory Day at that".

"This training is a pure provocation! Shootings, grenades where mothers with strollers walk, near schools..."

"I don't understand why the minister of defense permitted military training in the town? Why not in his country estate?"

This video was shot in the center of town. Military people with chevrons of the Estonian Army pulled into a garden square in front of a church. These soldiers in forest camouflage are armed with light weapons. And this happens in just a few dozen kilometers from the Russian border. Nearly 10,000 people are taking part in the manoeuvers.

Olga Saksa: "It's a very unpleasant situation. It was promised that the training would start on May 7th. But the soldiers were actually present from as early as May 4th. My daughter came running from the outside and asked, 'Mom, are we at war?"

Vsevolod Yurgenson, Municipal Council: "The government of the Republic of Estonia should be bolder. It should refuse to let NATO conduct training in its towns. Because in 2019, when there's no threat, it's not normal. I personally don't believe in the threat on the part of Russia. There's no need to conduct training right in the town."

NATO soldiers in the town of Kehra.

Children ride bicycles past the soldiers who rest in a meadow. Machine-gunners are shooting in the yard of a residential building. A family with a stroller is hurrying past armed men. According to the scenario, the soldiers are conducting a mock defense of Sillamäe. But it's not specified who is attacking and from where. The NATO commandment decided to conduct the Spring Storm nowhere but in the northeast of Estonia, where most residents are Russian.

The stage of street fighting drills will last until May 10th. This means that Victory Day on May 9th on the northeast of Estonia will hear the roar of shooting and helicopters. Not all of the locals are ready to believe in such a coincidence.