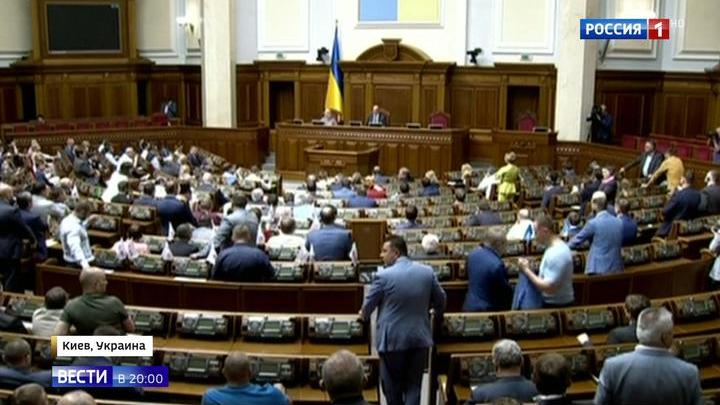 Let's move on to Ukraine and the first clash of Vladimir Zelensky with the Verkhovna Rada, which he's dissolving. The Parliament refused to consider the reform of the electoral system proposed by the president. Although, the sides seemed to be on the same page after consulting with party leaders. Apparently, the supporters of the previous government in the Parliament don't want to give up without a fight, at least in court.

Anton Lyadov is reporting on whether this clash will degenerate into a crisis.

Guys in masks, flares, and blackened streets in front of the Rada. MPs are screaming, unable to do a head count after two attempts.

"There being nobody to vote, the Rada can't start its work".

Some are wandering around, others are speaking on the phone or taking off and putting on jackets. Parubiy is served a cup of tea. Vice Speaker Gerashchenko, hiding behind a column, is trying on a lustrous bracelet. She did put it on, but can't take it off without her friend's help. First, the screen showed 220 MPs, then 208. Finally, they stopped at 240, and on the third attempt, the meeting began.

- Where is the law to impeach the president?

- Zelensky is a usurper!

- The newly elected president has already violated the Constitution.

Andrey Parubiy, Chairman of the Verkhovna Rada: "The presidential decree shows disrespect for the Constitution and also causes a constitutional crisis in Ukraine".

The decree proposed by Zelensky, which the MPs were supposed to discuss, was printed out only an hour after the meeting began. It's about changing the electoral code to choose a new Rada by new rules. It implies the abolition of the majority system, meaning that, in fact, the abolition of local elections in cities. It's proposed that MPs be elected by party lists. Earlier, Zelensky promised open lists, that is, when voters can vote for a certain person, giving them a chance to get into parliament. But, currently, closed lists are proposed, that is, the voter sees the candidates, but cannot decide whether this or that person from this list gets into parliament.

Oleg Lyashko, Radical Party of Oleg Lyashko: "The first bill submitted by Zelensky only demonstrates his desire to lead corruption. There's a famous saying from The Godfather, the film about Don Corleone: "If you can't defeat the mafia, lead it." Zelensky seems to be following this advice. I told him: "A bad beginning makes a bad ending".

The pretext for not voting for certain candidates is that they don't have enough time to prepare the new system with open lists as the election is in 2 months. And Zelensky should make haste. To date, riding high after the presidential election, he has every chance of getting a majority in the Rada. It's unclear what will happen next.

There are problems with the newly elected president already. Zelensky appointed Andrey Bogdan, who works for oligarch Igor Kolomoisky, as the head of the president's administration. He's a businessman who was a partner of a law firm and an adviser to Kolomoisky, who he still works with.

"He's referred to as an agent of Kolomoisky in the Zelensky team. He'd been the oligarch's adviser since he was the governor of the Dnepropetrovsk region and still continues to act as his lawyer".

Kolomoisky himself, who seems to be trying to keep a distance from Zelensky, openly admits that he deliberately isn't meeting with him to avoid scrutiny.

Igor Kolomoisky, entrepreneur: "Modern means of communication allow us not to meet face-to-face, so why should we? Firstly, a large number of journalists will immediately ask unnecessary questions. Then I'll have to explain to everyone that I just wanted to congratulate him. So, I congratulated him on the phone".

Another new appointment is the First Assistant to the President Sergei Shefir. He's been a friend of the new president since he was 17. He's also the business partner of Zelensky and invested 3 million hryvnias in his election campaign. Yuri Kostyuk, the scriptwriter of the TV series Servant of the People, was appointed the Deputy Head of the President's Administration. Judging by the latest news, Vladimir Zelensky isn't going to say goodbye to his media past. He started "The President’s Daily Routine," an internet vlog (video diary). Here he is sitting in Poroshenko's chair.

Seemingly, his team will feel uncomfortable, too. According to the current legislation, many of them fall under lustration.