Germany Sick of Being an American Colony; Tensions Come to Head Over Nord Stream II Pipeline 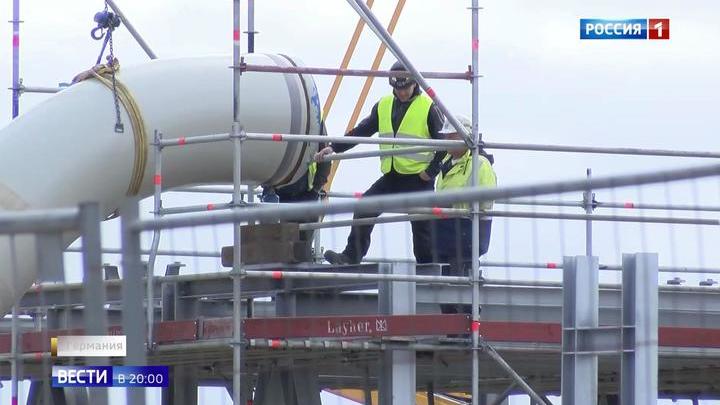 Germany is not an American colony, only Washington is interested in anti-Russian sanctions, was stated today Klaus Ernst, head of the Bundestag Committee on Economic Affairs and Energy, at the international natural gas conference in Berlin. He stressed that the US's LNG was nowhere near as beneficial as the Russian pipeline, and the American methods of conquering the European market were unacceptable. Angela Merkel is also convinced that Nord Stream 2 is unstoppable.

Mikhail Antonov is reporting from Germany.

German environmentalists held an action under the motto "Shut up the Nord Stream — 2", But since the Nord Stream itself was underwater, they attacked its land-based continuation, Eugal. So, five people have climbed into the pipe and are sitting there. At least they won't get lost. The police are waiting outside. They don't know what to do. It's actually the first attempt by the protesters to block Nord Stream 2 with their bodies; they've mostly resorted to political blackmail, threats, and manipulations. But Germany already knows how to react to this. The hastily adopted amendments to the EU gas directive, allegedly anti-monopoly and non-targeted, but, in fact, affecting Gazprom, are pretty hamstrung here.

Angela Merkel, the German chancellor: "The project enjoys the majority of the permits. The new gas directive gives the European Commission more opportunities for objections. But it won't prevent the project’s implementation. However, the key issue is still Ukraine, which should remain a transit country, despite the Nord Stream 2 project. I promised it".

The Berlin Energy conference discussed the Ukrainian transit. Given that European imports are expected to grow, Ukraine's gas transmission network might come in handy. Last year it processed 80 out of 200 billion cubic meters of gas that Gazprom supplied to Europe. But the poor condition of the pipe and never-ending trials on claims of the Ukrainian Naftogaz are not the best backgrounds for negotiations on transit.

Anatoly Yanovsky, Deputy Minister of Energy of Russia: "The current legal argument between Gazprom and Naftogaz, of course, makes it difficult to reach mutually beneficial agreements. That is, Gazprom has to take reciprocal steps related to appeals. It doesn't contribute to an agreement2.

By 2035 the capacity of the European gas market is expected to exceed 400 billion cubic meters per year because coal and nuclear energy won't be used, and the local gas production will fade. The United States, which plans to take Russia's place as the main energy supplier, uses different methods of persuasion and information channels. For example, through US Ambassador to Germany Grenell, it regularly threatens Germany with sanctions.

Klaus Ernst, head of the Bundestag Committee on Economic Affairs and Energy: "The US treats us like a puppet or one of its states. But it's not the case, we are not an American colony and we aren't going to become one".

Nord Stream 2 made Germany recall its sovereignty. At the same time, a number of states, primarily, Poland and the Baltic countries, gladly accepted their colonial status, loyally lobbying the US interests in Brussels. A large part of the European political establishment does the same. For example, Manfred Weber, leader of the centrist European People's Party in the European Parliament, who claims to preside over the European Commission, demanded the closure of Nord Stream 2, which greatly upset Angela Merkel, who used to support his candidacy.

Hans-Jörg Müller, head of the AfD party in Bundestag: "The question is who sponsoring and influencing Mr. Weber. I think it's a catastrophe that one of the top German politicians is eager to serve as an American puppet, betraying Germany's interests".

And here's the latest American invention against Nord Stream: The Senate is considering a bill on sanctions against the Italian Saipem and the Swiss Allseas which own the pipelayers involved in the construction of the gas pipeline. The companies that insured these vessels could also be punished. This is the Iranian scenario, which is unlikely to unfold. The offshore pipeline construction market is too narrow and specific to refuse to work with such an important customer as Gazprom.

Nevertheless, Washington realizes that its radical actions against Nord Stream 2 can irreversibly deteriorate the relations with its European partners, primarily with Germany and Austria. The most influential research institute, the RAND Corporation, regards the risks associated with imposing sanction restrictions on the project as very high.