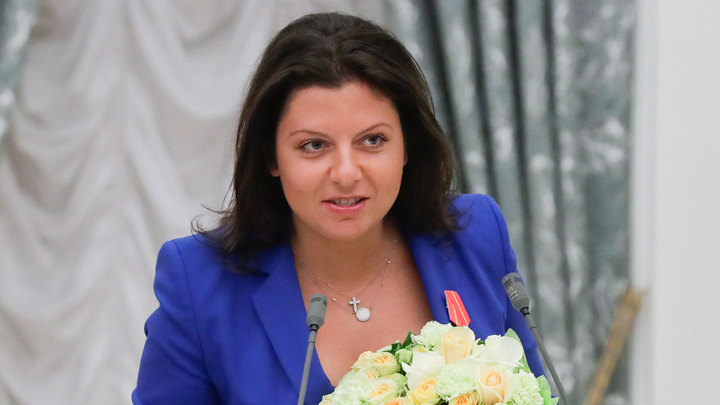 - Congratulations on receiving a state decoration.

- Yes, indeed. It's very beautiful, actually. It's amazing. Shall I show it?

- Here it is. Look at this beauty.

- How exciting is it to be rewarded by Putin and what did you talk about?

- Naturally, it's very exciting, firstly, because it's a state decoration, and, secondly, because it's Putin who presents it. I guess you also had this feeling when you receive a reward that it's all in advance. And a thought haunts you... Well, at least, I feel a bit awkward. Do I really deserve it? Why me? There are other decent people whom we just don't know. And you think: Okay, now I must do even better, work harder.

- Your decoration's been subject to public scrutiny all around the world. McFaul was very indignant. Well, McFaul is a sweetheart. He said you're a propagandist! Like, how could you've said "Serving Russia?"

- McFaul likes nothing better than being indignant over something, especially if it's connected to Russia Today or me. It's not the first time, actually. When I said that I was sure their side would get ahold of it, not only McFaul. You can't even imagine how many French papers covered it. I mean eminent French papers. Like, how come the head of RT announced in the Kremlin that she serves Russia? Then I asked McFaul: "Whom did you think I serve? Mossad? Did you have any idea?" That's astonishing. A great number of media outlets which are subtly funded by oligarchs, some entities, connected to certain funds which, in their turn, are tied to intelligence, proudly declare that they represent independent journalism. As for us, since the very beginning, we've openly announced that, firstly, we're Russian, and secondly, we're funded by the Russian state. Questions? The press-conference where we announced that was held when I was 25. It was the very beginning. 14 years later, McFaul writes: "Did you see? She's serving Russia!" It's just a headcase, you now.

- Does Putin determine the development of Russia Today anyhow? Like, this is a good story, and that one is bad? They're bound to think you're chatting with him online, asking for orders, if anything.

Yes, they do believe I'm speaking with Putin on the phone, can you imagine? And he allegedly gives me directions. I hope you understand that it's not the case.

- I want to ask you an uncomfortable question.

- Yes, I will. Recently, your journalist was beaten by French police batons.

- Not just one, but as many as 15 have been hit by French police batons.

- One of your journalists can be delivered to the USA where he can face 175 years behind bars. Well, he got into hot water before he started working for you, but still. He was an RT journalist, Assange. What does it feel like, to tell the truth?

- You know, I'd like to dwell on Assange. If I can. I consider Assange to be the greatest journalist of our time and our greatest contemporary. I believe that Assange will certainly make it into history if the world goes the way we're used to, meaning that history finally reveals the truth and isn't a chip programmed by Google and tagged into a baby's hand which contains some Wikipedia and makes a person think this way or that. Then, Assange won't be even mentioned. I fear that it will happen as we're moving in the leaps and bounds to what Orwell, Huxley, Zamyatin, and others described. Assange's done what journalism is actually meant to do. He's changed the world for the better by getting the truth out. It is the mission of journalism to get the truth out to change the world for the better. Some would argue that the mission of journalism is only to get out the truth, and it's not our concern whether the world changes for the better or for the worse. I don't agree. I'd probably have agreed when I was 18. But when you mature, have kids, you realize that there are no values which you should incorporate since they change the world for the worse. If a truth triggers a nuclear war tomorrow, nobody needs that truth.

But the truth told by Assange about the crimes of the American military, the duplicity of American foreign policies, the fact that the USA is watching over all of us. We all know it now, it's an open secret. YouTube refused to award us a Gold Play Button for one million subscribers, Even though it always does that. But why? Because we're state-funded. So, is there a rule that you can't award the Button in this case? No, but it's up to us. Assange was the first to reveal it. It made many high-powered people worldwide change their attitudes. The sole fact that he leaked data to WikiLeaks. Naturally, they couldn't' have left him in peace, safe and sound. Naturally, they'll lock him up for many years. I feel miserable when I think about how he could've come to us. But he didn't, you know. He went to the Embassy of Ecuador. The then-president of Ecuador was his friend. By the way, he now has his own program on our channel. And then he thought it would last, maybe, forever. But then that president left office and handed over power to his successor who made a U-turn in a night. And now we see what happened to Assange. I'm sure we wouldn't have delivered him. Like we don't deliver Snowden. I'm very proud of that there's no criminal extradition. But I feel so very sorry. I asked him then: "Julian, why are you doing it?" He didn't make any money on that. He said: "I hate it when they lie to me."

- Thanks for having me.