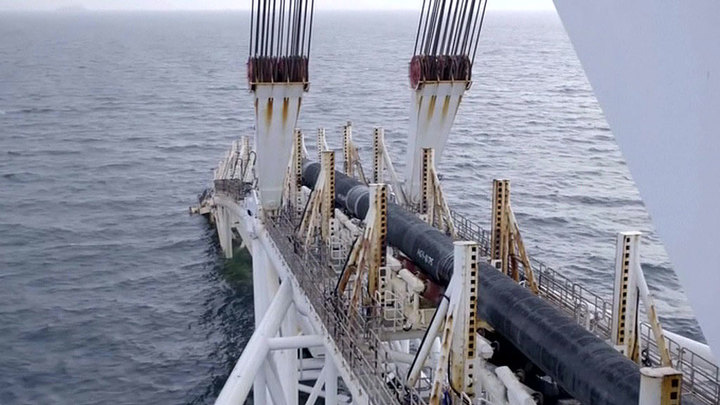 This is 60 Minutes with the headlines. We have a special report. The United States won't be able to stop Nord Stream 2. Russia is ready to go all the way. Putin has just commented on the new sanctions bill that the US Senate has already received. Our friends from Washington are trying very hard — now the bill's authors want to punish the owners of the pipe-laying ships, the ones that build the pipeline under water. To make you laugh, I'll tell you what kind of punishment it's going to be. All of them will be banned from the United States. Oh, how terrible!

The President of Austria is currently paying a visit to Moscow. At this point, let's make a lyrical digression about us famously being in such painful isolation, I mean the kind of isolation that we have foreign guests every day. The President of Austria said Vienna officially, which makes sense, would like to purchase affordable natural gas, which means Russian gas, whether Washington likes it or not. Only Ukraine is raging. They say they won't allow it, that Washington and Kiev are brothers, and they won't be abandoned. Now Mister Vadim is going to cry, begging for construction to stop. Yakub is going to weep as well.

But let's go to the Baltic Sea. Here's that poor, unfortunate pipe-layer that the United States declared war on. He's safe and sound, keeps laying the pipe, and talking about the sanctions. Let's watch an exclusive report by Evgeniy Popov.

The Solitaire is one of the world's largest ships. It's about 1,300 feet long. Now about 400 personnel are working on the ship. It reminds me of an aircraft carrier, both by its size and its political influence. The Solitaire's record is over 3 miles of pipe laid in just 24 hours. They're confident that Russian gas will flow through the pipeline along the bottom of the Baltic Sea by the end of the year.

It seems like the pipe is moving but it's actually the ship that's moving forward and the pipeline is being lowered onto the bottom of the Baltic Sea. The Solitaire covers about 2-2.5 miles per day. It means the Senate should hurry up with its sanctions. But it can hardly stop the international project.

The captain is a Dutchman, the crew consists of Germans, Spaniards, Canadians, Russians, Danes — there are all sorts of nationalities.

- Do you feel that you are involved in politics here?

- Is there any kind of pressure in terms of geopolitics?

Jens Mueller, press secretary of Nord Stream 2 AG: "Yes, fortunately. Despite what we do every day, I'm glad to see it's not only my house but other families in Teruel that'll have gas at home. This pipeline secures gas deliveries to Europe because domestic production of gas will decrease in Europe over the next 20 years. That's why Europe needs imports. Importing from different sources requires different means of transportation. That's why this project isn't something to be afraid of.”

Washington and Kiev seem to make the Solitaire move even faster. All the menacing statements, hysteria, and even the promise of sanctions against the pipe-laying vessel couldn't disrupt the schedule.

- How do you feel about the new sanctions?

Nico Scholte, Captain: I'm just doing my job. I'm not involved in politics. I'm just doing what I've told you. I work in all the seas and have never heard of any sanctions. That's not something that occupies my mind.

- Do you think you will be able to finish the project?

Yes, I think we will.

- Are you moving according to schedule?

- Yes, we are on schedule and doing pretty well.

The method is quite simple. The dry cargo ship approaches the Solitaire, unloads pipes, and here they are connected to a single pipeline which is laid onto the bottom of the sea. The Nord Stream 2 pipeline is laid at the depth of between 160 and 720 feet.

The distance between Ust-Luga in Russia and Greifswald in Germany is 760 miles. There'll be two pipe runs laid near Sweden, Finland, and Denmark. Now it's only Copenhagen that's delaying the permits for the work. If it doesn't issue them, Nord Stream 2 can bypass the waters of Denmark.

Pavel Persidsky, Deputy CTO: Our company is striving to complete the project. And we're doing our job to finish it on schedule.

- It means by the end of the year?

- Yes. When will the gas be pumped through? Our schedule stipulates the completion of the project and the start of gas feeding by the end of 2019.

By the way, look at these pipes. Earlier, Russia couldn't manufacture large-diameter pipes and had to buy them in Ukraine. Now, 60% of all the pipes used in the project are made in Russia. Another 40% are made in Germany.

Look, this is the culmination point of the Solitaire's work — the pipe is being lowered onto the bottom of the Baltic Sea. The depth here is about 230 feet.

Ukraine, being in the vanguard of those opposed to Nord Stream, hasn't even started negotiating with Russia on the gas transit via its pipeline. Kiev still believes Nord Stream 2 can be crushed by sanctions.

- I'd like to say hello to the Americans, if they're watching this, and tell them their efforts are in vain, Nord Stream is unstoppable. It's also unclear why Ukraine calls the pipeline "aggressive" and gas "frightening."

- Hello, Olga. Hello to our experts in the studio.

We're now on the bank of the Neva. A couple of hours ago, we were in the middle of nowhere. Actually, it was about 45 miles from Leningrad Oblast and its shore. But our GPS showed us that we were either in Estonia or Iceland. We didn't fly to Iceland indeed, but we were building Nord Stream 2 and we completed about 1.2 miles of the pipeline during the time we were on the Solitaire. So, first of all, Vadim, Yakub, Nord Stream 2 does exist. Because there are many people who say it doesn't, and they said the same about the Crimean Bridge. Secondly, everyone there is so positive. The crew is multinational, I didn't notice Ukrainians though, I think there are some but I just missed them. No sanctions will stop the project because people want to receive gas cheaper from Russia and they totally will as soon as Nord Stream 2 is completed. Ukraine is an unreliable partner. Everyone working on the project and in the entire world knows this. It can dictate the rules and blackmail whoever it wants to. This pipeline, the Nord Stream 2, will make it impossible for Ukraine to blackmail anyone. The pipeline will provide access to cheap gas to everyone else, end of story.

- Araik, could you tell us about these latest statements and sanctions? Are they the last throes or should we be prepared for a decisive blow that can change anything? Because, frankly speaking, I saw that there won't be anything of the kind. Sorry for replying for you.

Araik Stepanyan, political analyst: It's pretty simple. It's like you come to a store and see organic potatoes for 10 cents but you're told you have to buy processed potatoes for 1 dollar. Not even an idiot would buy the ones that cost 1 dollar!"

- Please, don't start your speech by insulting Yakub here. Because Yakub is the very kind of person who buys strange, expensive potatoes. Now we understand it's American liquefied gas because they struggle against "Russian aggression."

- But the potatoes are so aggressive!

- It's not just potatoes, it's imperial potatoes!

- Your potatoes are toxic! It's the opposite! All of Europe is waiting for the gas — Austria, Slovakia, and the Czech Republic.

Yakub Korejba: Stop lying! Have you read the latest directive of the European Commission?

- Don't be ridiculous to involve the Commission in here! The European Commission is a subsidiary of the US Congress, it's always been that. That's why they're fighting against Germany.

- Do you understand the directive is voidable for EU countries?

- Even for Germany and all other countries.

- It's a very important talk, don't shout each other down.

- The resolution... Quiet! The resolution doesn't say anything bad about the construction of Nord Stream 2. What's more, it's stated there that Nord Stream is the only opportunity for meeting Europe's heating needs. Moreover, Yakub, I've repeatedly said that Denmark is the only country that says Nord Stream is a threat to the kingdom and hasn't approved construction. But it takes only 1.5-2 months to bypass Denmark. Russian experts have taken this into consideration. It means we don't have to ask Denmark's permission. We asked but they said no. Now we shall proceed from the fact that everyone in Europe is waiting for Nord Stream 2 to be completed and people like Tryukhan won't steal gas any longer.