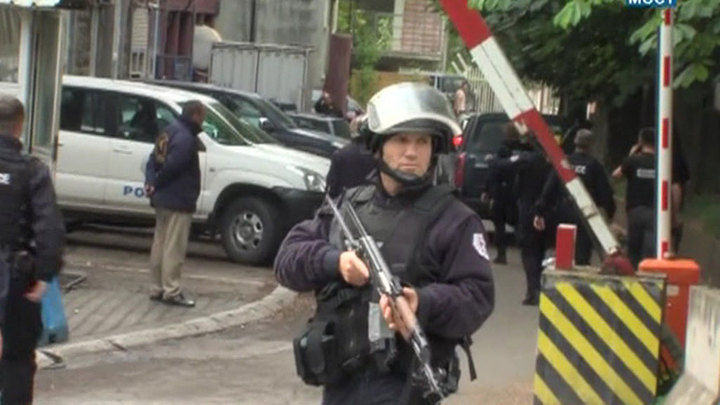 It's 60 Minutes with the headlines.

- Breaking news: Serbia is deploying troops and combat aircraft to the Kosovo border. This morning, under the pretext of a special operation, the special forces of the de jure and de facto independent state of Kosovo (not recognized by Russia) assaulted the northern areas of the republic where the majority of the population is Serbian.

- Dozens detained and injured. One of them is our diplomat Mikhail Krasnoshchokov, a member of the UN mission. He was injured and taken to the hospital. There were reports of his critical condition but we recently saw the footage of him being escorted out of the hospital and getting into an ambulance. The attack on the diplomat, who has diplomatic immunity provided by the UN, naturally, was called an outrageous provocation by the Foreign Ministry. The ministry added that the actions of the Kosovo special forces are aimed at pushing the Serbian population out of Kosovo.

Aleksandar Vucic, President of Serbia: "This morning at 6:29 AM, as the Supreme Commander-in-Chief, I put our military on alert. In case of serious violations of law and order, or a threat to the lives of Serbians in Northern Kosovo and Metohija, our Armed Forces will protect our people. I guarantee that if there's an escalation, if the attacks on Serbians continue, all I can say is that Serbia will win.”

- There's one thing I don't understand, Konstantin. What does Kosovo, or rather its criminal government, want? They already trade human organs under the protection of the US and the other countries that recognized it. They print fake dollars. Why are they provoking another conflict?

Konstantin Zatulin, member of State Duma: I believe this individual episode must be viewed in a broader context. In fact, Serbia and Kosovo are being used as bargaining chips. Serbia is being forced to recognize Kosovo. Serbia will be rewarded with an opportunity to join the EU. If Serbia recognizes Kosovo, the latter will become legitimate. The unrecognized country will turn into a recognized one. There can be no issues when it comes to recognition if even Serbia recognizes it. The situation the Serbian president ended up in looks a lot like a dead end. On the one hand, he knows that the recognition of Kosovo will cost him popularity among his people.

- We've recently been to Belgrade, the whole city is covered in graffiti saying "United Serbia".

- Moreover, there's a prophecy saying that the first president or head of state that recognizes Kosovo will be assassinated. They'll be executed by the people of Serbia. But that's an emotional statement. And still, on the one hand, Vucic's government declared that they were going to join the EU provided that they're not forced to join NATO. They were only going to join the EU. That's the carrot. It's still unclear if Europe wants this carrot. In this situation, Kosovo was pushed towards escalating the conflict so that later it can retreat or pretend to retreat and achieve its primary goal of forcing Serbia to recognize Kosovo. Vucic is facing this dilemma. He's got complex issues in his country. He's simultaneously opposed by the Western opposition and the nationalist opposition. The Western one doesn't have any serious positions in Serbia but the nationalists do. The Western opposition is exploiting them to oust Vucic. "If you don't recognize Kosovo, we'll topple you. If you do, your own people will topple you". That's what Vucic is facing. He needs to find a way to work with his opposition, particularly those who consider Kosovo a part of Serbia. He needs to find a way to approach them. Instead, he's been accusing them from the rostrum, calling them Nazis and so on. Meanwhile, the Kosovars and the Albanians are trying to achieve their goal, the "Great Albania", as they call it openly. Hashim Thaci says it openly. Of course, they act under the protection of the US. That's not a European story, it's an American one. Kosovo was implanted into the body of Europe to impede the development of Europe.

- Could we hear the statement Vucic made earlier this morning? Even before the invasion, he didn't directly recognize Kosovo but said that Serbia had officially lost control over the situation and the territory. After that, it becomes clear that the incident at the border was a provocation, an invasion aimed at forcing Vucic to recognize Kosovo. If we have it, let's hear it.

Aleksandar Vucic, President of Serbia: "As the President of Serbia, I must tell my people the truth, regardless of how bitter it is. I decided to stop lying and deceiving myself. I told everyone that Serbia has neither control nor authority over Kosovo and Metohija. For our people's well-being and to keep them well-informed, we must stop deceiving our own people".

- That's the statement he voiced after the incident. What are we supposed to do in this situation? We're the guarantors of peace and we're good friends of Serbia. Serbians are our good friends. They rush to hug you once they hear you speaking Russian. It's still a country that loves Russians and we love Serbians as well. It's a complicated thing. Remember our famous crossing of Pristina 20 years ago? They were so excited to see Russian flags there. They're still as excited to see Russians in Serbia. That's why we can't ignore the situation, even more so after our diplomat got detained by criminals.