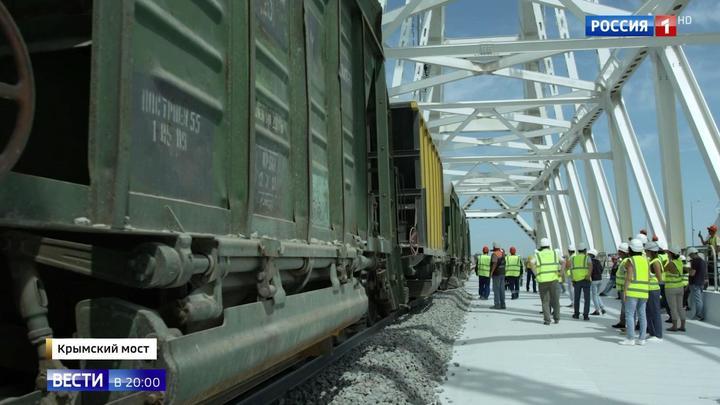 It's a historical moment for the builders of the Crimean bridge, the inhabitants of the peninsula, and millions of tourists. The first railway route on the bridge has been completed. The rails were laid synchronously from both shores. Today, the final links named Kerch and Taman were solemnly connected. For the time being, only technical trains will run along this line.

See Nikolay Dolgachev's report to find out when the passenger route will open.

The railway has connected the shores of Krasnodar Krai and Crimea. The work is now being done rapidly. It's the final part of it. The railway communication through the Crimean bridge will be launched very soon. The joining was done right under the arches of the bridge. The railway links named Kerch and Taman finally met. Two construction crews were moving towards each other for months.

Arkady Rotenberg, CEO of Stroigazmontazh: "We've finished the first line. This is also a landmark event for the bridge. Our task is not only to build the bridge but also put it into operation in time. I think the secret of success is behind the people who want to do it, who can do it, and they actually do it."

"We've been doing it with love. The finish is near. We're about to connect Kerch and Taman".

"Work is work, no matter where. But this is an outstanding event".

Within a few minutes after the joining, the railroad bed is being filled with rubble. These are hopper-batchers. They lay rubble onto the railroad bed. In fact, now it's possible to travel to Crimea by train but, for now, only maintenance trains can do so. The work is going at an increasingly fast pace.

Yevgeny Chibyshev, contractor: "The links were joined right in the center of the arch. There's still a lot to be done — ballasting, alignment, welding".

Trains will be able to go at a speed of 75 miles per hour but there are already proposals to reduce the speed so that passengers could admire the view during the absolutely smooth movement. This railway is also called the velvet path because there are no joints between the rails. There will be no usual clackety-clack sound of a train. Rails are welded together. It looks like this. This part will be ground until smooth. It's done with unique equipment installed on this unusual truck.

When the trains start, the arches of the bridge will shine in a new light. Decorative lighting is being installed right now. The final touches are made. The most inaccessible places of the Crimean bridge are painted manually. The great construction project is coming to an end. Now, it's the final step. This year, the land gates of the Crimea will open wide and their throughput will be more than twenty million passengers a year.

This transport passage across the two seas, the Black and the Azov, reliably connects two Russian shores.