Pistols at Dawn! Zelensky’s BFF Says New President Wants to Fight Putin One on One! 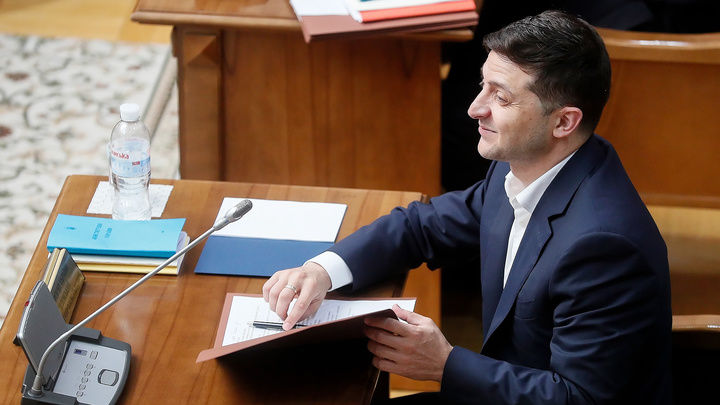 Evgeny Koshevoi, actor, Kvartal 95:  Perhaps, they need to talk man-to-man, then he can get a slap on his face.

- For what he did. Well, our Vovan works out. He can give him a good hit.

- You mean for Zelensky to beat Putin? Seriously?

- To say "angry" means to say nothing. I think all of our team agrees that this person generates hatred, to put it mildly.

- Well, never before have state leaders fought during talks…

- It would be the duel of the year.

- Indeed. Well, perhaps, it's bad to do it because of a sort of political correctness... But why be politically correct with this man?

- On the other hand, the entire civilized world would back us.

- Well, your president is a showman too.

- He's just one of the actors…

- It's his closest associate! If Zelensky didn't share his opinion, he'd immediately express his view somehow. At least condemn this odious statement, given that every day you keep asking us to meet with you. We don't fancy it now.

Igor Korotchenko, National Defense magazine editor-in-chief: I don't know how to comment on this. It's not even rudeness, it's an absolutely obscene statement made by an official.

- Evgeny, he speaks for the team, and the Ukrainian president doesn't disavow such statements.

- You know, it's crystal clear that if such statements are made on a social and political program, it only means that Ukraine is still going through a period of political turbulence. The country has no basement, or line of policy, or anything else beside animal instincts of its political representatives. The video demonstrates the trashiest human feelings. Unfortunately, this is the Ukrainian political elite today. Base, trashy instincts under the guise of policies. Unfortunately, even as we see that surveys show that 70-80% of the Ukrainian population wants peace and steady development, there's an ardent minority embracing the participants in the Donbass massacre, whose arms are wet to the elbows with blood. It's the Ukrainian nationalists, the extreme radicals. There are few of them in Ukraine. But they're ardent, they actually impose their brainchild behavior pattern on society and Ukraine as a state. But... This is called fascism. We saw the similar behavior of fighters in brown shirts in the early 30s. They actually imposed that jingoistic ideology on Germany. Today, unfortunately, Ukraine sees the same process.

The authorities are doing nothing. He quotes the man who calls himself the Ukrainian Prosecutor General. Come on, he doesn't have an honest bone in his body. What kind of prosecutor general is he? He looks like an independent mafioso who's notorious not only for his disgraceful behavior, but also for some stuff after which he is to be fired at once. Unfortunately, this is the Ukrainian political landscape.

- Well, Zelensky promised to dismiss him, but he failed.

- Zelensky promised a lot, you know. First and foremost, Zelensky promised to deliver on the hopes of the people who voted for him. To stop the war. Eradicate corruption. Initiate a criminal case against Poroshenko and his entourage. Finally, if Ukrainian justice advocates for its national interests, the military crimes of Ukrainian military men and volunteer militia in the east of the country must be prosecuted too because Ukrainians killed Ukrainians, let's face it. If any conclusions can be drawn for Russia, we should understand that under no circumstances, even if the worst comes to worst, must we let the Ukrainian scenario play out here. Statehood is the supreme value. To ruin state institutions, the state itself and law enforcement, means to plunge the country into chaos and inflict suffering on tens of millions of people.

Thus, as exemplified in Ukraine, we should understand how one must not act.