Putin Congratulates Narendra Modi On His Victory in the Elections! Relations Will Only Strengthen! 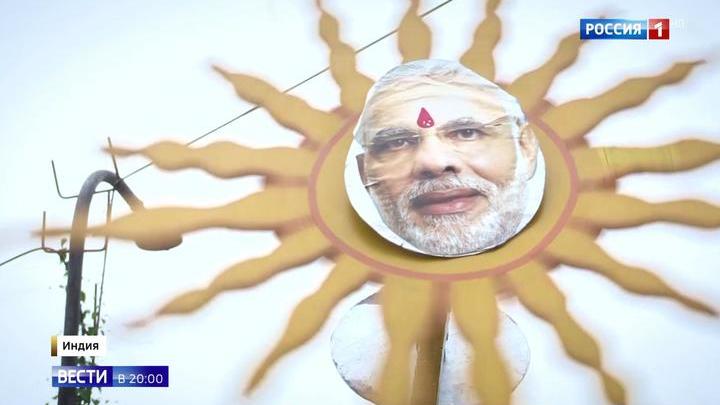 Vladimir Putin had a telephone conversation with Indian Prime Minister Narendra Modi. The president congratulated Modi his party's victory in the general parliamentary election. Both politicians reaffirmed their readiness to strengthen the countries' strategic partnerships. In the elections, which lasted over a month in India, the National Democratic Alliance, headed by Modi's party, won more than half of the seats in the lower house of the parliament.

On what this means to both the prime minister and the country, see the report by our staff correspondent in India, Dmitry Melnikov.

For supporters of the ruling party, the sun is especially bright today. After the month and a half long election, divided into several stages, it's time to decide the winner. After each of the seven stages, the voting machines were brought to specially secured premises where they were to wait the final hour. Today, the sealed rooms have been opened. The electoral commission in the presence of representatives of the parties began the final stage of this unprecedented election campaign — the counting of votes. The turnout of voters was 67%, a record for independent India. The largest-scale election has brought landslide victory to the National Democratic Alliance, headed by the Indian People's Party.

Narendra Modi: "Many of you are chanting 'Modi'. But this is not Modi's victory. This is the victory of the honest Indian people. And I bow to every citizen of India".

Narasimha Rao, Bharatiya Janata Party: "The future government and Narendra Modi personally received huge credibility from the citizens of India. As we see, no one even came close to the results shown by the prime minister’s party".

But how weighty was Narendra Modi's contribution to the victory? His previous term as prime minister passed under criticism of the opposition. However, the growth rate of the Indian economy is among the highest in the world.

This is how the Bharatiya Janata Party, the party of the current prime minister, Narendra Modi, celebrates the convincing victory. For the first time ever the BJP and its supporters will form a government for the second time in a row. Its main opponent is the Indian National Congress and its supporters. This is the coalition brought to the election by grandchildren of Indira Gandhi, Rahul and Priyanka. Despite losing, they've managed to improve their position. But it's largely due to the achievements of their famous predecessors.

Over the next week, the winners should form the Cabinet of Ministers. No one in India has doubts that it will be headed by Narendra Modi again.