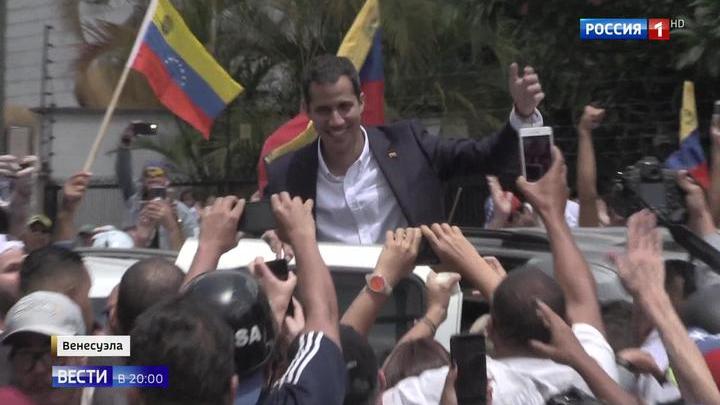 He was to be immediately arrested on Maduro's orders but he broke into the Venezuelan capital with the help of foreign ambassadors and armored SUVs. The return of Juan Guaido to his homeland looked rather like a special operation under the guise of an anti-government rally. The impostor didn't go out to the people who supposedly surrounded the airport in order to protect the impostor.

Our special correspondent Anton Lyadov found out why.

This is footage from the airplane on the way to Caracas. Guaido picks up the flight attendants' loudspeaker and voices familiar slogans.

"There's no doubt that we'll achieve our democracy and freedom for the good of our country! God bless all of you! Tell me: will we manage to do it?"

After this demonstration in the air, according to the rules of the genre, the fighter against the regime was supposed to be arrested. But neither handcuffs nor force techniques were used in the airport. Guaido has his passport stamped and entered freely, accompanied by representatives of the EU, as well as ambassadors of Latin American and European countries.

It wasn't clear until the last moment how exactly Guaido would get to the rally. People have already been waiting for him for two hours in the hot sun. And suddenly, he appears.

Look, there he is. Guaido appears. He gets out of the car.

Bodyguards, volunteers, associates tried to encircle Guaido. We managed to break in to ask him a question.

- Will you try to import humanitarian aid into the country again?

Juan Guaido: "I won't try merely one more time but as many times as necessary".

The question about the hundreds of victims on the border of Venezuela and Colombia as a result of a forceful breakthrough hung in the air because of that hustle. Guaido claims that he returned to secure the resignation of the current president.

At the same time, Maduro made it clear that he doesn't intend to give up. On Twitter, he posted a video with his own words that the people of Venezuela will continue to resist.

"The battle that is taking place in Venezuela is a battle for humanity and be sure that together we'll win!"

Maduro also stressed that he'll continue to fight despite the pressure from the U.S. Earlier, Trump's NSA, John Bolton, threatened him with a "decisive response" if something happens to Guaido. By the way, Bolton openly announced plans to create a coalition to implement regime change in Venezuela and remove Maduro, whom he called a dictator. CNN presenter Jake Tapper reminded Bolton that the U.S. supports the regimes of "cruel dictators" in other countries.

"Of course, Maduro isn't a person I'd like to defend, but it seems to me that the USA's support for other cruel dictators all over the world undermines the credibility of your words".

John Bolton, U.S. National Security Advisor: "No, I think that's different. The people working in this administration aren't afraid to use the term "Monroe Doctrine".

In the "Monroe Doctrine", which was issued in 1823, calls all of South America the USA's exclusive sphere of influence.

Russian Foreign Minister Sergey Lavrov has already called this statement by Bolton an insult to all of Latin America.