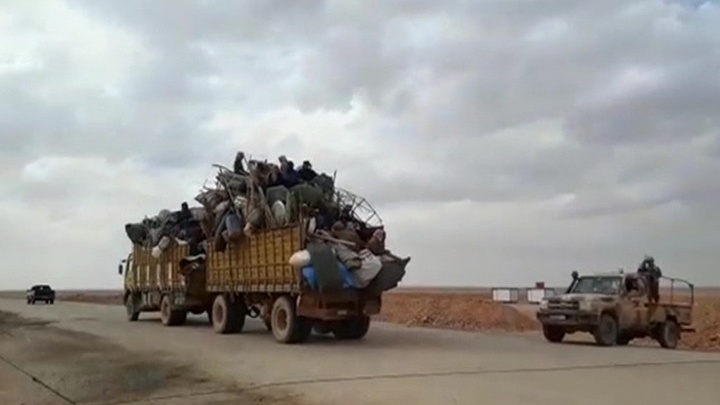 Hundreds of refugees who fled from the Rukban camp are settling on free Syrian territory. They received temporary housing and were promised jobs. The people claim that they went through hell, ruled by American soldiers.

Our special reporter Alexander Rudenko with the details.

Full of blankets, rugs, furniture, tin bowls and buckets, dozens of heavily loaded trucks cross the border between the occupied and the free Syrian territory. For the first time in several years, 350 refugees left the infamous camp after suffering from violence, disease, and severe hunger in Rukban.

"Some villagers gave us these chickens on our way here. They'll feed us. If not for meat, we'd be eating grass or soil".

After Rukban, the Homs Refugee Center seems like a five-star hotel. It used to be a school, so the rooms are warm, and have electricity, water, mattresses, and blankets, minimal conditions for which these people had to risk, planning their escape.

Ali Jash, refugee: "We outsmarted them, told them we'd go search for food. We'd been fighting for our lives for four long years. We started each day searching for food and water. Healthy men, women, and kids were dying from hunger. Rukban is hell. It's a giant cage where the Americans are in charge".

Ali Jash is the father of a large family. His wife and five children are by his side. They're dirty and exhausted, but at least they're not hungry. The Reception Center functions like a hotel. Here's lunch: hot soup, meat and pasta, bread, and water. The people are glad to receive even such a modest lunch.

"I haven't eaten food like this in several years. I've forgotten the taste of hot food. I'm grateful to the Syrian Army and the government for helping us".

Doctors, to whom these people didn't have access for several years work every day at the center. The Red Crescent doctors carry out daily assessments and bring medications. All seriously ill patients were sent to local hospitals. Every child (more than 50% of the refugees) got vaccinated.

Amakh Deyri, doctor: "Many have lung and respiratory issues. Some suffer from allergies. Some were injured. We can see that these people haven't received the best treatment at the camp. They might've been beaten and brutalized".

There aren't any checkpoints or barriers at the center. Entrance and exit are free. However, few people have left so far. Many refugees have to restore the documents they lost during their odyssey.

Muhammad Abbas, head of the center: "We find out where the people lived before the war and will check the condition of their houses. In any case, nobody will be left homeless".

The refugees have also been promised jobs in Syria. There are plenty of jobs. Syria has lost almost half of its population so there's a personnel gap in its farms and factories. Extra pairs of hands will be welcome there. The first 350 refugees are like a grain of sand in the desert. Many more old people, children, and women are being forcefully held in unbearable conditions at the Jordan border.

It's possible that the issue will be resolved on April 2nd at the meeting between the Russian military, the Syrian government, the UN, and the refugees themselves. The Americans, who've been ignoring the issue so far, are also invited.