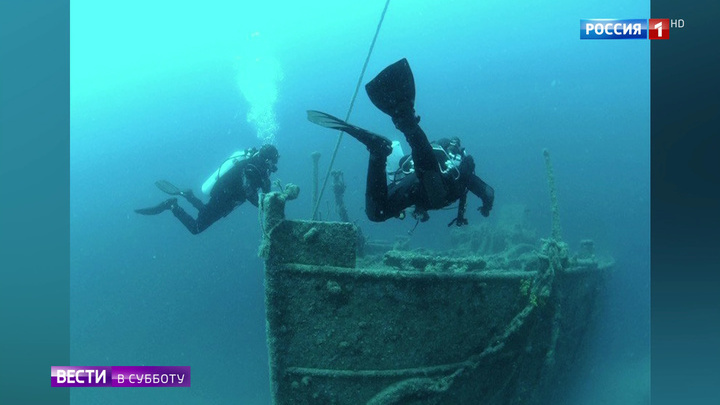 Amazing news came from Crimea today. It's about the operation to lift paintings by Aivazovsky from the board of the steamer General Kotzebue, which sank over a century ago.

Our staff correspondent in Crimea, Artyom Kol, has the improbable details.

This is the exclusive footage of the underwater expedition "Neptune". Five amateur divers from Rostov-on-Don found a sunken ship off the western coast of Crimea, at Cape Tarkhankut. They made this video of their inspection of the double-deck ship from the 19th century, General Kotzebue, last year. It was then that fragments of paintings were found in one of the cabins.

Roman Dunaev, leader of the expedition "Neptune": "There were over ten paintings. We realized that there were two rows. There are also paintings covered with clay and shells. They'll probably be intact".

The wreckage of the 209-foot paddle steamer lay in the Black Sea for over 100 years at a depth of 131 feet. In 1895, the General Kotzebue collided with a frigate of the Black Sea Fleet, 12 miles off the coast.

The Neptune expedition has been carried out since 2015 by 30 people with the money of the Presidential Grants Foundation in the framework of the project Crimea — the Crossroads of Civilizations. Underwater archaeologists are looking for submerged ships, airplanes, and other artifacts of the past at the bottom of the Black Sea.

The expensive interior of a civilian ship is still impressive. There are porcelain sinks, carved furniture, and unique tiles on the deck. But the most important thing is the paintings, possibly belonging to the brush of the great artist Ivan Aivazovsky.

Roman Dunaev: "He lived and worked on the Kotzebue. It's quite possible that he painted some pictures and gave them to the captain of the vessel".

The steamer was the first vessel to pass through the newly opened Suez Canal. From history, we know that in the middle of the 19th-century Russian artist Ivan Aivazovsky traveled on it. Most likely, the artist painted pictures during the expedition.

Judging by the divers' video, it's extremely difficult to make out what's in the paintings because of a thick layer of clay. Therefore, it isn't possible right now to lift the works of art to the surface.

Roman Dunaev: "We hope that together with archeologists and restoration artists from Crimea, for example, we'll lift some fragments and hand them over for restoration".

The team of divers from Rostov plans to go on a new expedition to the steamer General Kotzebue to explore the pictures once again in a month.