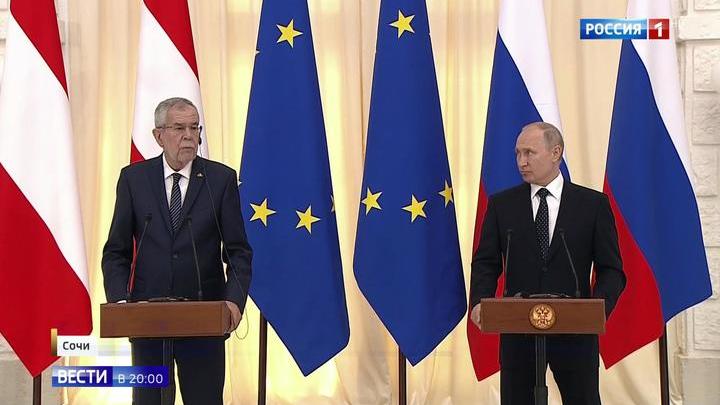 Russia is ready for compromises in negotiations with its foreign partners but not at the expense of its national interests. Vladimir Putin today reiterated Moscow's position on sanctions, relations with the US, and the Iranian problem after the meeting with his Austrian counterpart. Alexander Van Der Bellen, in turn, confirmed that, despite the pressure from Washington, Vienna won't refuse to participate in the Nord Stream 2 project.

Alexey Petrov has the details.

The tone was businesslike, but the atmosphere of the meeting was really warm. Putin greeted his counterpart and gave a bouquet of pale pink peonies to the spouse of the Austrian president. The delegation included Karin Kneissl, the head of the Austrian Foreign Ministry. The delegations went inside. There were employees not only of the Russian but also the Austrian security services in the office. They started to discuss common history. Austria, for example, today celebrated the anniversary of the signing of the treaty on statehood, which essentially determined the entire modern history of the country.

Vladimir Putin: “You remembered the signing of the treaty of 1955. The Soviet Union played a decisive role in it. The sovereignty of Austria was fully returned. I think that the non-bloc status helps us develop relations today.”

Alexander Van der Bellen, President of Austria: "I don't know if this is true or not, but I heard a story that Khrushchev once spent 13 days in Austria to get to know our country. I don't know what experience he had. But as soon as you get to know Sochi, you immediately want to spend as much time as possible here".

Upon his arrival in Sochi, Alexander Van der Bellen immediately posted photos on social media. Russia isn't an alien country for the politician. His ancestors moved from Holland to Russia in the times of Peter I. Therefore, the Austrian president didn't hide his desire to get to know Russia better. He has a special attitude to our country. So does the head of the Austrian Foreign Ministry. Last summer, Putin attended her wedding.

- Is this your first time in Sochi?

Karin Kneissl, Foreign Minister of Austria: "For many of us, this is the first visit to Sochi. But I've read a lot about this city. And it's a great honor for me to be in such a prestigious place".

But the first question by Austrian journalists was about the Russian-American agenda and the possible meeting between Putin and Trump.

Vladimir Putin: "As I see, President Trump and I will have the earliest possible opportunity to meet at the G20 summit in Japan. It isn't about us. It's about our American partners. As soon as they're ready for this, their domestic political situation changes so that we can work, we're ready to make all necessary efforts at that time".

Nord Stream 2 is one of the large-scale projects that cause obvious irritation in Washington. An Austrian business, the gas concern OMV, also participates in it. Might it withdraw from the project under the threat of US sanctions? They asked the presidents about it. The Austrian president clearly wanted everyone to hear his words.

Vladimir Putin: “In fact, there are attempts at unfair competition. There is nothing else behind it. Yes, our partners know that their product is more expensive and isn't of better quality. Nevertheless, they're trying to impose their services on their partners in the areas of defense and the economy. But Austria isn't the biggest country in the world. But in order to protect its national interests, neither nuclear weapons nor territory is required in this case. Only political will is required. It's easier to work with the Turks than Europeans. Erdogan decided and did it. And here, one needs 27 countries to agree. We've been harping on the same string for years and nothing is going on. And that's sad.”

Alexey Miller, Gazprom CEO: "As of now, 771 miles of the pipeline have already been built. And it's 50.6% of the total length of the twin pipes. This means that today, our Austrian partners and we have fulfilled more than half of the Nord Stream 2 project".

Austria is confident in the supply of Russian gas. The contracts they signed are valid until 2040.

They discussed the most pertinent issues in international politics as well. Of course, the Austrian president knows that yesterday, Vladimir Putin received Secretary of State Pompeo in Sochi. And there are a number of differences between Europe and the US on the Iranian issue in particular. As of today, Tehran has suspended its obligations on the nuclear deal. For Iran, this is a forced decision in response to a provocation by the US. A year ago, America withdrew from the deal. Now, President Trump imposed sanctions and intends to bring the export of Iranian oil to zero.

Vladimir Putin: "Now, I will say, you know, a kind of a non-diplomatic thing. It could hurt the ears of our European friends. America withdrew, the treaty is being destroyed. The European countries can't do anything to save it and really can't work with Iran to compensate for the losses in the economic sphere. But as soon as Iran takes the first steps in response, it declares itself that it withdraws from some treaty, on the following day, everyone will forget that the US was the initiator of the destruction. They'll blame Iran for everything. I've told this to the Iranians many times. To be honest, I don't think that it's wise for them to withdraw from this treaty. Well, we'll see what will happen next. Russia is not a fire-fighting squad, we can't save everything that doesn't fully depend on us. We've played our part. We're ready to keep playing the same positive role. But it depends not only on us".

Bilateral cooperation is among the main topics of the meeting, of course. In 2018, trade increased by almost 43%, compared to the previous year. Over 1,200 Austrian firms operate in Russia.

- One gets the impression that the Russian-Austrian dialogue differs markedly from the general Russian-European dialogue. Maybe we can say that the tough line in Europe gives way to a kind of European pragmatism?

Vladimir Putin: "We're ready for compromises, we're ready to search for solutions to any complex issues and problems but not at the expense of our fundamental interests, our fundamental national interests, that's it. Hopefully, one day, we'll restore the whole complex of our relations in their original form and move on".

An agreement to hold a year of literature and theater will help move on. In addition to it, this autumn, the Salzburg Museum is ready to return the objects of ancient art that were taken from the Russian storages during WWII.

The new platform Sochi Dialogue also started working. It brings together representatives of civil society. At today's meeting, they talked about how Russia and Sochi are changing.

Christoph Leitl, President of the Association of European Chambers of Commerce and Industry: “Mr. President, I congratulate you on how beautiful the city of Sochi has become. You put a lot of effort into it. When we talk about Russia, Moscow and Saint Petersburg come to mind first, and now this is essentially a new Russian triangle where Sochi is also included. We're deeply impressed.”

Vladimir Putin: "Over 40 leading Austrian companies took part in the preparations for the Olympics. We did it with the help of our Austrian friends as well. By the way, our Austrian friends made decent money here. They made 1.6 billion euros. This is the practical result of cooperation".

The Austrian president was also impressed by Sochi.

In addition, the Russian president invited Austrian businessmen to the upcoming Saint Petersburg Economic Forum. Entrepreneurs will clearly have something to discuss.