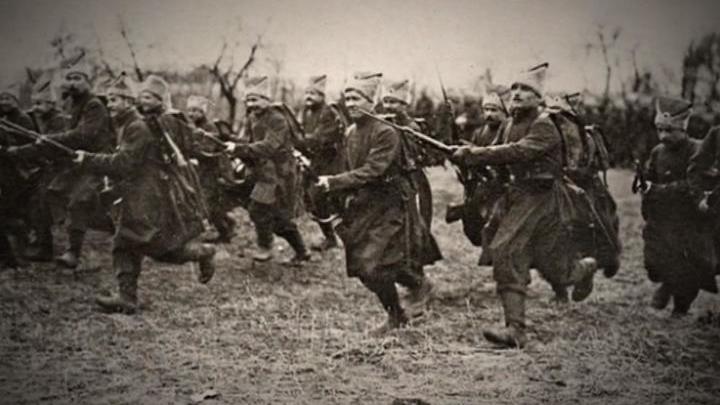 Tragic glee. It's hard to find another description of the hysteria around the mournful festivities on the 85th anniversary of the undocumented and uninvestigated crime that will be forever remembered by Wikipedia: the Holodomor.

"The memorial service started right behind me on the stairs of the Hendricks Chapel. People have gathered here to honor the victims of the Holodomor. The Holodomor was the famine that raged in Ukraine from 1932-1933. It was part of Stalin's systematic industrialization of the USSR".

"It will be a place where all Torontonians will be able to honor the dead and learn a lesson. We must never forget the Holodomor and the victims of this tragedy".

Chrystia Freeland, Foreign Minister of Canada: "I'm so proud of the hard work done by the Ukrainian-Canadian Society. The people who've gathered here embody it. Truth, history, and memory are important. We also must not forget about the Ukrainians who are suffering today Oleg Sentsov and the Crimean Tatars. May the victims be remembered forever."

Foreign Minister Chrystia Freeland, granddaughter of a Ukrainian collaborator who fled to Canada after the war, opened a memorial to the victims of Stalin's regime. Shortly before that, the US Congress adopted a resolution that proclaimed the Holodomor an act of Soviet genocide. Here's an extract from it.

"We support the efforts by the people of Ukraine to work toward ensuring democratic principles, a free-market economy, and full respect for human rights in order to enable Ukraine to achieve its potential as an important strategic partner of the US in that region and to reflect the will of its people".

Today, the state of Connecticut proclaimed the Holodomor a genocide of Ukrainian people. The relevant proclamation was signed by Governor Dannel Malloy.

Greg Ottenbreit, Minister of Saskatchewan-Ukraine Relations: "Well, Holodomor was quite hidden up to the 1980s when people started studying the archives and it became clear that six to ten million Ukrainians starved to death."

Each of his words is crystal-pure truth. Nobody was aware of the Holodomor prior to the 1980s. But then, it was suddenly discovered that the deaths of six or ten million people had been concealed by the totalitarian regime for almost 50 years. Is there a reasonable explanation of how can one hide the disappearance of ten million people over the course of a year? Ten million is more than the population of modern Hungary or Jordan, Serbia or Austria, Switzerland, Israel, Sweden, or Azerbaijan. Over a single year? It's called the Holodomor (it's Golodomor in Russian) not only to mimic the Ukrainian pronunciation or to make it easier for foreigners to pronounce but also to draw a direct phonetic association to the Holocaust. The legal prospects are obvious. It's important to note that Soviet diplomacy never recognized either term because they were a supremacist nationalistic interpretation of undoubtedly tragic events in the first half of the 20th century. But each tragedy was privatized by nationalists. The consequences of the international promotion of the Holodomor are rather predictable and follow the familiar pay-and-repent scenario. Not just for the famines that plagued various regions of the USSR in the period between 1921 and the 1950s but for socialism as a whole, for challenging to a world of plunder, war, and exploitation.

"From the dictator Stalin’s point of view, Ukraine was a problem, and its nationalist movement threatened to grow into an uprising. Ukrainian peasants were reluctant to join the kolkhozes where they had to give up their land and property. In revenge, the Bolsheviks repressed the prosperous peasants, took everything they owned, and deported them".

But was there famine? There was. But where did it come from? Wasn't the policy of promoting industrialization in the Soviet Union a response to the destructive aftermath of WWI and the looming threat of the next war? Wasn't it WWI, which was started by bankers and steel barons, that made Ukraine, Russia, and all of Europe a smoking ruin, with millions being hungry and unemployed? Wasn't it the war that brought the Kaiser battalions to Kiev, triggering a revolution and a massacre of civilians, by the end of which Ukrainian peasants could finally own land after defeating the invaders. The previous owners of the precious Ukrainian chernozem weren't resourceful and prosperous Ukrainian farmers. The land used to belong to landlords. Weren't severe international sanctions imposed against the USSR for seizing private property? The sanctions were the reason the citizens had to sell their jewelry and scrap the bottom of the barrel. But wasn't the stifling blockade interrupted when the USSR and the US established diplomatic relations in November of 1933, the "Black Year".

We're left with two options. Either in the midst of the Great Depression, President Roosevelt sacrificed the memory of ten million Ukrainians starving to death for profitable contracts from the dictator Stalin. Everyone knows that the first Dneproges turbines were supplied by General Electric. Or there simply weren't ten million deaths.

Today, the mournful euphoria engulfs not only European and American cities, but naturally, Ukraine as well.

Here's a public service ad about the Holodomor, a picturesque example of what almost all of the Soviet republics have turned into. The video shows us a man held prisoner in Russia, a soldier injured in Donbass, a police officer riding a riot control vehicle, schoolchildren, and an old shoemaker. At 4 P.M. on November 24th, they simultaneously renounce their Soviet past. The ad doesn't show any factories, combines, nuclear power stations, or research laboratories. What it does show is poverty, desolation, depression, and hatred of the past. But in reality, the Holodomor is their present and their future.

"Last Friday, Ukrainian lawmakers passed the 2019 budget. securing the first tranche of a new $3.9 billion IMF aid program to tide over a choppy election period next year. IMF aid has effectively been frozen since April 2017. It's going to cost a lot considering Ukraine's reluctance to increase gas prices for the population by 25%".

All of those dark spots of degradation are not exclusive to Ukraine; the Russian de-Sovietization is no different. Instead of demolishing monuments we slyly take them away for restoration and secretly change the inscriptions. However, the minds of the youth are on the same old rails. The destination is also the same.

Ilya Varlamov, blogger: "I believe that the Soviets occupied Russia. It was one of the bloodiest and most inhumane regimes of the 20th century. At the beginning of the century, they exploited the weakness of the Tsar to seize power and rape the country for 69 years. Our modern society is infected with metastases from the USSR which tightly holds it in its claws. We often hear the words "Russian mentality." That notorious Russian mentality which we're always blaming for all our of troubles and the mess around us has nothing to do with Russia. It's the Soviet mentality."

Indeed, the younger the blogger, the harder suffered from Stalin's repressions. Every year, we get more and more Soviet mentality experts.

"In 1983, the Soviet citizens had no independent anti-corruption investigations. It was almost impossible to discover that a corrupt official got convicted. Articles about dirty politicians rarely appeared in the newspapers when the party wanted to demonstrate the triumph of the socialist legal system".

By the way, besides the Holodomor and the Holocaust, Wikipedia has another H-word: Hiroshima. But the city-blogger tortured by the USSR and touched by the tidiness of modern-day Japan found no components of crime, or reason to be upset or repent for the genocide there. But unlike a leather-jacket-wearing commissar, the nuclear bomb saw no difference between ethnicities and races, women, the elderly, and children.

Ilya Varlamov, blogger: "The American president and command believed that Hiroshima was the most humane target. US air force repeatedly warned the Japanese population that they were preparing to drop bombs. They threw leaflets over the target cities. But wasn't the case with Hiroshima. Nobody told the Japanese that a new type of weapon would be tested on them. They expected a usual bombing which they could hide from. Nobody expected to be hit by a nuclear bomb"

Did they print the wrong leaflets? Even now, there are five US military facilities in the Hiroshima prefecture. In total, 50,000 American soldiers are stationed in Japan. The firebombing of Tokyo on March 9th, 1945 (the leaflets were supposed to be correct that time) burned 125,000 people in a single night. That's more than Dresden, Hamburg, Hiroshima, or Nagasaki. Shouldn't they apologize? Shouldn't they repent? And moreover, shouldn't they pay?

It was Agitation and Propaganda.

See you soon. Peace be in your home.