Better We Kill Them There Than Here: Putin Explains the Merits of Fighting Jihadis in Syria 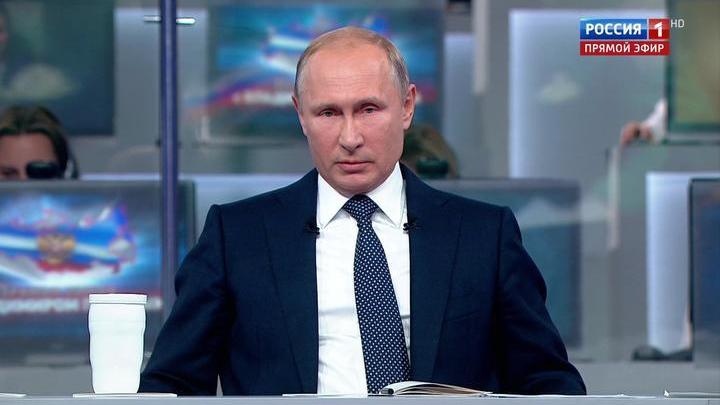 —Thank you, Kirill. We've received 2,500,000 inquiries so far. Let's revisit the topic of refugees and Donbass. The people in Syria are awaiting peace as much as those in Donbass are. Our viewers watch what happens in Syria just as attentively and reverently, one of the reasons being that our servicemen are on duty in that flashpoint area. We have Sergey Mikhailov from Karachay-Cherkessia on the line.

President Putin: "We don't just have a contingent of troops in the Syrian Arab Republic. Here's what I have to say. First, using our armed forces in combat conditions is a unique tool that provides a unique experience, improving our armed forces. No military training will ever come close to actual combat. Yes, we realize that using armed forces in combat conditions causes casualties. We will never forget these casualties. We will always support the families of our comrades who never returned from Syrian land. However, this was an important, noble mission, to protect the interests of Russian citizens. I remind you that thousands of insurgents from the Russian Federation and Middle Eastern countries, with whom we have no controlled borders, have gathered in Syria. First, it was better to neutralize them there than to welcome them here, with guns in their hands.

Second, our combat operations contributed to stabilizing the situation in the Syrian Republic. Today, over 90% of the Syrian population resides in territory controlled by the Syrian Army and the Syrian government. Mass combat activities, especially ones involving the Russian Armed Forces, have ended, there's no need for them anymore. Our order of business for the day is regulating the situation peacefully, which we're working on.

As for our servicemen in Syria, I repeat, this isn't just a military contingent. We have two staging points there. The naval one in Tartus Harbor, and the aviation one in Khmeimim, which is there under an agreement with the Syrian government, and in full compliance with the international law. Our servicemen are there to secure Russia's interests in this crucial region of the world that is so close to us. They will remain there for as long as Russia still benefits from it, and to fulfill our international obligations. For now, we do not plan to withdraw these divisions. Please note, I didn't call these staging points by another name, I didn't call them 'bases.' We don't build any permanent structures there. And, once it's necessary, we can withdraw all of our servicemen from there with no material, loss rather quickly. However, for now, we need them there to carry out critical missions, such as ensuring our safety in this region, and securing our interests in the economic realm".