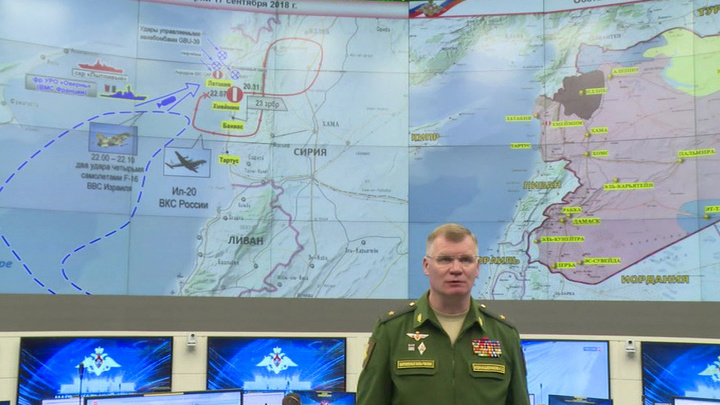 We've just received the official statement from the Russian Ministry of Defense.

Igor Konashenkov, Ministry of Defense Spokesman: "On September 17th at about 10:00 p.m., four F-16 of the Israeli Air Force delivered a guided bomb attack against Syrian facilities in the vicinity of Latakia. The target run was carried out at a low altitude from the Mediterranean Sea. The Israeli jets deliberately created a dangerous situation for the ships and aircraft located in that area. The strike was delivered in the vicinity of the French frigate Auvergne and the Russian Il-20 aircraft that was landing.

The Israeli pilots used the Russian aircraft as a shield against the Syrian missile defense. As a result, the Il-20, whose effective reflection surface is greater than the F-16, was shot down by an S-200 anti-aircraft missile. The Israeli flight control facilities and F-16 pilots couldn't miss the Russian aircraft as it was descending from an altitude of 16,000 feet Still, they deliberately executed this provocation. Israel didn't warn the Command of the Russian Forces in Syria about the upcoming operation. They received a call via hotline less than a minute before the strike. which denied them an opportunity to guide the Russian aircraft to a safe zone. A rescue operation is currently being conducted at the crash site of the Il-20.

We consider these provocative actions of Israel to be hostile. The reckless actions of the Israeli military killed 15 Russian airmen. It's absolutely incompatible with the spirit of the Russian-Israeli partnership. We reserve the right to respond accordingly".