Trump Gives His Inaugural Speech Without Using The Word "Democracy" 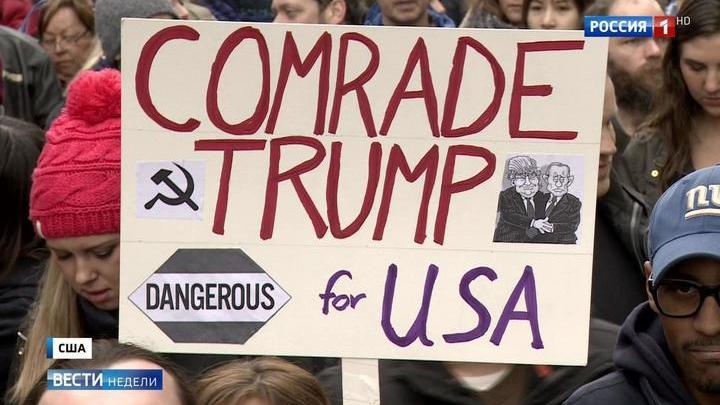 If you have noticed, the protest against Trump is as inane as it is crowded. Women complain that he hates them. But this is not true technically. Posters show Trump next to a swastika and Putin. But the swastika really has nothing to do with Trump, and Putin does not control Trump. This is just nonsense! It is even hard to believe that so many Americans are so easily fooled by their own press.

Actor Robert De Niro is reading some primitive and meaningless text from a sheet of paper. We have already shown this, but again, pay attention. Whatever happens, we, Americans, we New-Yorkers, we, patriots, will stand united for the rights of our fellow citizens. And all the rest were saying the same. Self-organization of these citizens is so pathetic that, once they'd gathered, as we remember, they could not even move. Either they did not know where to go, or they did not know why they should go anywhere. President Trump deprived none of them of their freedom. They will continue living as they have been living. I even wonder what will happen with this, I wanted to say "movement", but no they're really just standing there, say, in a month or two. We will be watching it together.

An interesting experience of democracy. Trump, by the way, in his inaugural speech, did not utter word “democracy” even once. Not because he is against it, but because in the conditions of the existing model of American democracy, he's calling for more honesty, both between citizens, and between the United States itself and with other countries. By the way, the words “Europe” and “NATO” also weren't heard in the inaugural speech of the new President. Trump sent this message in a recent interview with the German newspaper Bild. For example, he called NATO an archaic institution. I have been saying for a long time that NATO has problems. It is out of date because, as you know, it was created many, many years ago. Countries do not pay their fair share.

That is, we need to protect these countries, but many of them aren't paying what they are supposed to pay. It is very unfair for the United States. As for the EU, Trump has already divided it up in his head and, apparently, will build relations not with the EU, but with each country separately. The United Kingdom. A special relationship, and the first meeting with a foreign leader has been arranged with the Prime Minister Theresa May. It will take place this week. France. Trump will wait for the new President in April. And then he will see. Germany is also in the large "European troika”. This is a difficult case. Angela Merkel and the German press openly supported Hillary Clinton and trolled Trump, interfering in the American electoral process. Contact with Merkel has not yet been announced. Moreover, Trump is likely to start by taking Merkel down a peg with her German arrogance to later figure out how he wants to approach relations with Germany in the end.

Nevertheless, an expert from Brookings Institution Tamara Cofman Wittes thinks that the administration of Trump will now start discrediting Merkel. We have already said that in an interview with Bild Trump called Merkel's immigration policy a big failure. And it can be put even more harshly, as did WorldNetDaily: Angela Merkel is losing her mind, saying we should confront terrorism with love and compassion. Merkel feels Trump’s coldness towards her and expects an even worse attitude. In fact, according to the Spiegel magazine, the Chancellor has repeatedly tried to build bridges with Trump’s people, but with no result. They've gotten no response.