Berlin's Bows Towards Washington Are Getting Lower 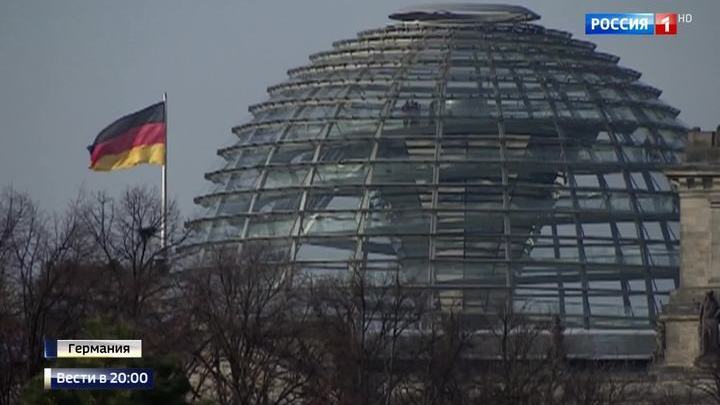 Near Nuremberg this week, NATO began its exercises, for which the alliance hired Russian-speaking extras to play the roles of civilians. Maneuvers will take place at the Hohenfels base, where American paratroopers are stationed. It’s still unknown what role is assigned to German soldiers in the exercise scenarios.

However, this is not so important. Whatever the US initiative is, Berlin will definitely support it. After World War II, several generations of politicians have grown up in Germany, for which subordination to Washington is the norm, and no one seems to want to violate it. Gerhard Schroeder broke the rules for some time. But in general, the state of affairs didn’t change after the collapse of the Eastern bloc and after the takeover of the GDR. This obedience of the German leaders, of course, couldn’t go unnoticed for the whole world, and in half a century, it even spawned many conspiracy explanations. One of the most popular is as follows.

Each incoming head of Germany is obliged to sign a secret agreement with the United States in the framework of the so-called Chancellor Act, which was allegedly signed in 1949 between Bonn and Washington. It is believed that the document guarantees Germany's loyalty through US control over German media, the German army through the presence of American and British military bases, and over the German economy. There is no official evidence for the existence of the Chancellor Act, but Angela Merkel acts as if she signed it again and again every year.

The most vivid example is the anti-Russian sanctions, which the US insisted on, and which Berlin so excitedly rushed to introduce, which in turn caused Germany to lose from 6 to 17 billion euros. How independent in the decision-making process is Europe's most economically powerful country, and what is it being taught during NATO exercises with Russian-speaking extras? Mikhail Antonov reports.

I remember that before the reunification of Germany, when the country wasn’t yet declared sovereign, people who had a linchpin for politics engaged in it: Willy Brandt, Helmut Schmidt, Helmut Kohl, Hans-Dietrich Genscher. Even in non-sovereign Germany, they showed such firmness of conviction that the questions of dependence on someone seemed irrelevant. Behind mountains and forests, in the north of Bavaria, there is a well-disguised Hohenfels military training center. The only thing that gives it out is the abundance of signs in English. Gates 1,2,3. Somewhere there must be gates 10 and 20. Here is the main gate.

The center is called multinational, but the Americans, of course, are in command here. On the perimeter of the polygon, a warning "Danger of Life" can be seen every 100 meters. In Bavaria alone, these signs surround 380 square kilometers. This is about a quarter larger than Munich's territory. In some places, the polygon borders with residential buildings. This light-colored building is a secondary school of Schmidmühlen. Together with the mayor of Schmidmühlen we are looking at the map. The Americans are cramped. They want to expand by another two hectares.

In case of expansion, the polygon will be 10 meters away from the school. Now it's 200-250 meters away. They are trying to convince me that the territory attached to the polygon will become some kind of a buffer zone which will perform a protective function. But it was here that the army trucks got off their course and drove right next to the school 4 weeks ago. If you are interested in what the Germans think about the military, the first thing you need to ask is where they live.

In the town of Hohenfels, which gave the name to the polygon, there are 2,000 residents. It is located on the southern border, and this explains why the local mayor is delighted with such neighbors Approximately 170 inhabitants of our village work at the military base. Our roads aren't filled with military equipment. Only if someone gets lost. We are where nothing happens. Schmidmühlen and dozens of villages alike, are, on the contrary, in the north, that is, on the way of constant military traffic between the Hohenfels polygon and an even larger base in Grafenwöhr. Day and night shootings and the tank's roar, which periodically enter the farm fields. The biggest problem is the helicopter's night flights. Moreover, the military uses blank ammunition, which is monstrously loud. There are people who call me at 3 or 4 in the morning and say: "I want you to hear that they are shooting again".

It used to happen two or three times a year, but now they're shooting all the time. Ten training camps were built on the territory of the polygon. They have already played the roles of Iraq and Afghanistan. Now, it’s time for a new geography. Together with militaries from the Balkan countries, as well as Lithuania and Ukraine, Americans are preparing for operations in Eastern Europe. It was for these exercises that they looked for Russian-speaking extras to play the civilians. The locals could have told the actors that to look more real they need to not only run around the polygon with frightened faces, but also to look up.

It’s a fact that a howitzer once fell on a pasture of a livestock breeder from Schmidmühlen. It could happen like this. Three Hummers are smashed. At least it happened on the polygon. But strike drones also fly over Hohenfels and Grafenwöhr. They also fall regularly. Frau Kaschner, from the village of Fensterbach, leads a public initiative to ban drones, but in fact, she wouldn’t mind closing the polygons at the same time. We dream that the land becomes our property again, that the territory is at our disposal, and the military leaves. If you want to know my personal opinion, I will honestly and openly tell you that the Russian troops left Germany's territory in the past. It would be fair if the United States followed suit. It seems that the US army sometimes behaves like invaders. Invaders or allies? They argue a lot about this in Germany. A popular topic is the Chancellor Act.

Allegedly in 1949, the Western allies forced Chancellor Adenauer to sign a top-secret document that obliged the FRG authorities, no matter what happens, to follow their policy for the next 150 years, and allegedly since then, it has been signed by every German chancellor without fail. Willy Wimmer, the former Secretary of State for the Ministry of Defense, who once commanded NATO exercises, doesn’t believe in the Chancellor Act, and thinks that the readiness to be subjected is an inherent feature of the current German elite.

Today's Federal Republic of Germany is of a poor quality, despite the fact that we have sovereignty under international law. We abandoned the German constitutional tradition in favor of European integration. The fact that our political personnel bows to Washington every morning is added to this. They do it more than once to be surely noticed. Recently, they have to bow lower. From the level of the US President, the German Chancellor bent down to his adviser on a voluntary basis. Without hiding, she seeks friendship with Ivanka Trump, because friendship with her dad is under question. But these are Merkel's current problems.

The historical German track is that if one day their new chancellor doesn’t want to bow, then Germany still won’t have an option. Bases like Hohenfels exists to assure this.