The Meeting Between Putin and Trump: What Will Change? 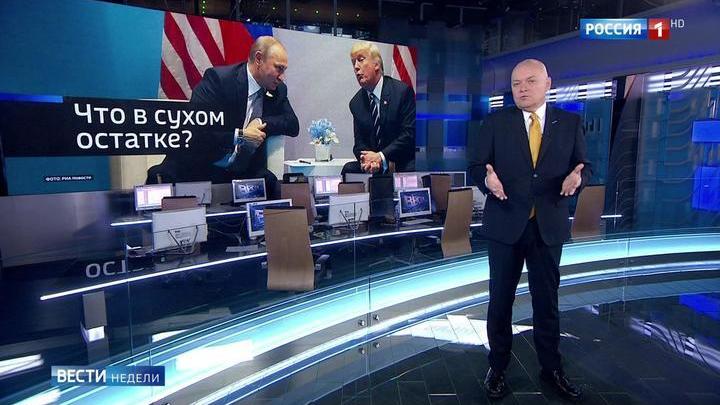 The second week comes to an end after the first Putin-Trump meeting in Hamburg. Of course, it’s interesting to make a kind of a revision and see what has changed in the Russian-American relations over this time. Formally, back then, they agreed to negotiate. On the three main points.

First, they decided to create a permanent channel for communication on Ukraine with special representatives. Russia is still represented by Vladislav Surkov, the US — by the newly appointed Kurt Volker. There’s been no movement yet. Volker is getting up to speed. He’s spent this week in Kiev. Surkov, who is under all possible sanctions, is ready to meet with Volker at any time in Moscow or on any other neutral territory when Volker is available. The American hasn't yet offered a date so the Russian-American channel on Ukraine hasn’t started working. Second, they agreed to create zones of de-escalation in the southwest of Syria in three districts.

Since midday last Sunday, so for a week, there has been a ceasefire. It's good. Russia and the United States have committed themselves to bringing to peace those groups to which our influence extends. It seems like a success, but on Friday, Deputy Assistant to the Head of the White House, Sebastian Gorka, said on CNN that the United States would return Russia's diplomatic property arrested in Washington only if they saw the Kremlin's desire to observe the truce in Syria. Listen, it's, as they say, a new opening. Earlier, there was no such talk.

Moreover, this Sebastian Gorka, reflecting on behalf of the White House, made the following profound statement on the basis of the agreements of the Presidents of Russia and the United States. The fact is that we can’t share the same philosophy, the same statements, the same view on peace. Excuse me, what kind of nonsense is that? It's about an out-of-town dacha of the Russian embassy. This property was bought out by the Soviet Union before the Second World War. No one ever encroached upon this diplomatic property even in the darkest times of McCarthyism and the Cold War.

And now, contrary to all international conventions and contrary to the simple right of property, it was arrested for some reason. What difference in philosophy can justify this? Further, on behalf of the White House, same Gorka. And if we see good faith, remember, more than 400,000 people were killed in Syria, and it’s terrible, if we see that the Kremlin acts in good faith in terms of issues such as the ceasefire in Syria, then, perhaps, there is a chance that Rex Tillerson will want it to happen. First, the figure of 400 thousand killed in Syria is pulled out of a hat and can’t be confirmed by any specific sources.

400 thousand is a fake. And, in fact, to be honest, there’s no rhyme or reason in that. What is the connection between Syria and our property in the US, arrested "in the last convulsions", as Lavrov said, "in the last convulsions" of the Obama administration? More than six months have passed since the arrest and the expulsion of 35 Russian diplomats from America. The Kremlin hasn’t yet done anything in response, having decided to give the new administration a chance to win it back. But this hasn't happened yet. Our property was never returned.

Moreover, they even forbid Russian diplomats from entering this territory to understand what is happening there. In addition, new diplomats are not given a visa to come to the US to replace the expelled ones. Now, there is a certain condition, for some reason connected with Syria. So, what’s next? Maybe we will be asked to do something else? For example, return Crimea for the ambassadorial dachas in America? Or, maybe, deliver Kim Jong-un to the US? Or maybe something else cosmic? Where do we draw the line? The Kremlin reacted laconically.

The return of the Russian diplomatic property can’t and shouldn’t be conditioned by anything. This contradicts international law in the most categorical way. Tomorrow, in Washington, there will be a meeting between Deputy Foreign Minister, Sergei Ryabkov, and US Assistant Secretary of State for Political Affairs, Thomas Shannon. Ryabkov-Shannon is a permanent diplomatic channel, about which Lavrov agreed with Tillerson during the first visit of the US Secretary of State to Moscow.

So, if Ryabkov and Shannon, in the end, don’t agree on the replenishment of our embassy staff in the United States and about the return of our diplomatic property, then Russia will finally take retaliatory measures. As a result, three dozen American diplomats will be expelled from Russia.

The conditions of stay of the remaining ones and their families will deteriorate so much that they could ask the State Department for an increase in their pensions for service in Russia. I don’t know if the American school will be closed here, although it was discussed earlier, but I know that the developed package of the retaliatory measures is so severe that it will give them a hard time.

Probably, it certainly won’t improve our relations with the United States, but emotionally the authors of the list of the retaliatory measure can be understood. It’s been too much. Sanctions on the least occasion. And often it happened that first there was a provocation, "murky setups," and then — again sanctions. Our Foreign Ministry, of course, doesn’t want this, because it’ll be more difficult to work after. But not everything depends on the Ministry of Foreign Affairs. In the end, foreign policy in Russia is led by the President. He is, of course, a patient man, but his patience has limits.

And the third point from the agreements between Putin and Trump is the creation of the Russian-American working group on cyber security. Back in the US, Trump suddenly wrote on Twitter that he didn’t believe in the creation of such a group, didn't think that it can happen. Honestly, it's strange. If you don’t believe in it, why would you commit yourself to doing this? And what is the call, the impulse from Trump to his subordinates to work with the Russians to create a group on cyber security, or not to work because he himself doesn’t believe in it?

In the end, if the boss says that he doesn’t believe in something, then everywhere in the world this means that it certainly isn’t necessary. That is, there’s no success with the joint group on cyber security with the USA. But Putin, after the meeting with Trump in Hamburg, announced an absolutely clear agreement with the US President. We agreed with the President of the United States that we will create a working group and work together on how to jointly monitor security in the field of cyberspace, how to ensure unconditional compliance with the international legal norms in this area, and how to prevent interference in the internal affairs of foreign states.

First of all, we are talking about Russia and the United States in this case. We believe that if we manage to build this work, and I have no reason to doubt it, then there will be no more speculation on this topic. As you can see, Putin was determined to work together, and Trump, who refused to participate in the press conference in Hamburg, only wrote a sluggish tweet that he didn’t think that all this would happen. Well, if it really doesn’t happen, then at least we now know who wasn’t ready to solve the problems of cyber security.

In fact, this is the takeaway of what happened in the Russia-US relations after the first Putin-Trump meeting. All then, everyone said that the meeting was unusually long. It depends. Maybe it was abnormally short because 2 hours and 15 minutes is clearly not enough if you understand the scale of common challenges. And it's bad that they didn’t agree on the next meeting. Trump then said that he "got along with Putin" and that the meeting was "great." It might have been. At least, America still has all the opportunities to interact with Russia. It’s only necessary to use them.