Clever Sabotage? Who Exactly Added the Names of Russia’s Top 96 Oligarchs to the "Kremlin List"? 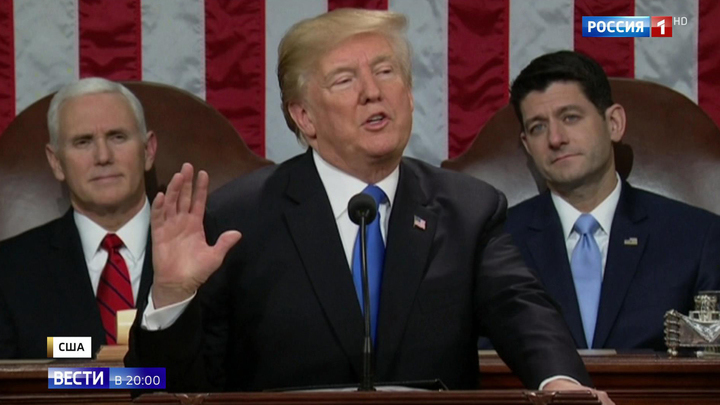 Black clothing, noise in the auditorium, and empty seats. This is how Congress met the first State of the Union from the US President, Donald Trump.

Speaking about his success, the White House Head suddenly announced that terrorists in Syria were defeated exclusively by the Western coalition led by the US, and not by Russia. Perhaps, with this loud statement, Trump tried to divert attention from today's information leak about name changes in the US Treasury's so-called, "The Kremlin Report."

The reason for which, even the Congress doesn't fully understand.

Valentin Bogdanov reporting from the US.

The so-called "Kremlin report" looks different than what its authors would have liked. Senior researcher of the Atlantic Council, Anders Aslund, blames a mysterious hand for the fact that the final list is similar to the book index of "Who's Who in Today's Russia".

"At the last minute someone at the top, it's not yet known who exactly, threw out the expert research, and wrote in the names of high-ranking Russian Presidential officials and the government, and adding 96 Russian billionaires from the Forbes list. In doing so, this high-ranking official made a fool of the government experts who prepared a completely different report".

Aslund also blames the US Secretary of Treasury, Steven Mnuchin, who signed it, for the plan failing. Steven Mnuchin was also attacked in the Senate Committee.

Steven Mnuchin: "Senator, we very much agree with the purpose of the report, an extraordinary amount of work has been done. I assume that you haven't yet looked at the classified version".

A lot of pressure was put on him, and he said that sanctions could be introduced in the near future.

Donald Trump managed to avoid the hot topic in his first report at the State of the Union. And not a word about the alleged Russian interference in the US elections. Trump ranked Russia and China as America's rivals. At the same time, the US President didn't note the contribution of Russian Aerospace Forces to the defeat of terrorists in Syria, attributing the victory over ISIS to Washington and its allies.

Donald Trump, US President: "I am proud to report that the coalition that defeated ISIS freed almost 100% territory that was under the militants' control, but much work remains to be done."

Part of this, according to Trump, should be preserving the Guantanamo Bay prison, which Obama promised to close but didn't. Some, however, after listening to their President, left the Capitol unsatisfied.

Bernie Sanders, senator: "How can a President not talk about the fact that Russia using cyber weapons interfered in our elections in 2016, that it interferes in democratic elections around the world".

Democrats and those who are close to them, like Bernie Sanders, certainly don't need evidence for conspiracy attacks.

During the discussion, they created another Russia's Foreign Intelligence Chief's trip to the US. In Washington, Sergei Naryshkin discussed the fight against terrorism in preparation for the World Cup. The Democrats have already demanded White House to publicize the entire list of those with whom he met.

Valentin Bogdanov and Ivan Utkin. From the US — Vesti