Top Pundit Satanovsky: We Will Only Have Peace After America is Defeated 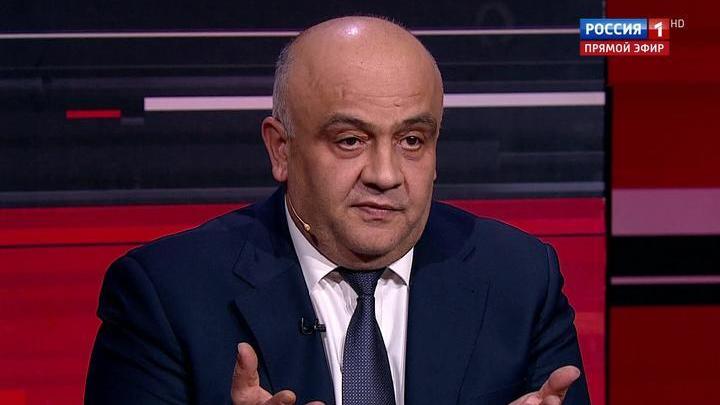 Satanovsky, why do we need those negotiations? What could Trump say that would later be confirmed by the Congress? What could they give us?

Evgeny Satanovsky, orientalist, Head of the Middle East Institute: Moral satisfaction and something to discuss on the TV. I'm game. We can stand here all we want, discussing what Trump can or can't do what he wants and doesn't want to do but the reality is rough and sad. A detente in our relations with the US is our ultimate goal. We should be able to build our future policy. We need to restore our relations, achieve trust and respect parity. We need to ensure the implementation of our agreements and leave sanctions behind. We also need to stop the tantrums that the UK and others have been throwing lately.

Was there ever a detente with the US? We had one after the war in Vietnam. Valery Gerasimov mentioned it and he knows how it goes. The military proved to be much more efficient than diplomats. Let's recall some figures. During the war in Vietnam the USSR lost 16 soldiers. The US lost 58,300 not including the injured. 100,000 — 150,000 of those" Rambos" commit suicide upon returning home due to their psychological trauma. The number of aircraft the US lost... Remember we promised them a missile response if they strike Damascus. Vietnam, when our economy was in a bad state. 9,408 American airplanes, helicopters, and drones and more than 2,500 South Vietnamese ones. McCain should remember the 2,500 South Vietnamese machines. In this regard we also had an open military conflict with the US in Korea, you can call it a proxy war. The international coalition there was much larger than in Vietnam: South Korea, Japan, Thailand, and many others. Australia and New Zealand too, by the way.

- Everybody participated in the war between South and North Korea, even Turkey with quite a strong army. In this context, you can talk about a detente with the US as a mutual goal. Both countries shouldn't run around screaming what they want and what they can't do in the Congress. Trump must deal on his own with a bunch of old guys that are not willing to listen to him. I understand that those who speak on the TV say what they have to say. But the military commanders of both countries have other priorities.

And I assume that only after realizing that we have the technologies they thought we didn't have. After Putin's Address to the Federation Council, they started clamoring: "You have nothing. Come on, prove it!" And then, the US intelligence discovered that its data is insufficient. Well, maybe if some sore physicist, mathematician, or engineer explains and proves it they'll have at least some information. For now…

- Didn't we leak it on purpose?

- I wouldn't be so sure today. It's clear that the Pentagon says they've got nothing not only because they want some money. They always want money. And speaking about them spending this money, compare the amounts Russia and the U.S. spend on new military equipment. There's quite a difference. Currently, we make more airplanes than the U.S., even though we still can't believe in our own success. I'm afraid that those statements about the US space forces, as well as many other things, will inevitably lead to a conflict. That's unavoidable.

The Romans used to say: "If you wish for peace, prepare for war." The experience of our previous conflicts might help us. All those dialogues will lead to nothing. Syria, Ukraine, or both might become our war-zone. I won't speculate on that. I know only one thing. I know Pompeo. He's afraid to oppose Trump. Unlike Tillerson, he never... Two great perks of having Pompeo: He never opposes Trump and never opposes Trump's son-in-law. That's why he became the Secretary of State. His reports are 50% nonsense and 50%garbage. They get translated into Russian so we can assume Pompeo's level of expertise. Unfortunately, they don't even understand what's happening right in front of their eyes in Afghanistan. They managed to rally Pakistan, Iran, China and the republics of Central Asia against their troops in Afghanistan. Recommending Trump to bet on India was an utterly stupid idea. In this regard, we can say thanks and wish them luck. While they have such experts and analysts, we win both tactically and strategically. That is for sure.

We'll see how it goes. No optimistic forecast. If they meet, that's fine. If they don't, whatever. The sanctions will last for years. And before the harsh armed conflict, no matter where it happens, that'll make America realize its inferiority we shouldn't expect smiles, handshakes, or the abolition of the sanctions.

- Don't we have enough willpower to exploit our full potential? Americans believe it's nonsense.

- I am not the one who's delusional. I asked them directly but didn't get an answer.

- Everything's fine with our willpower.