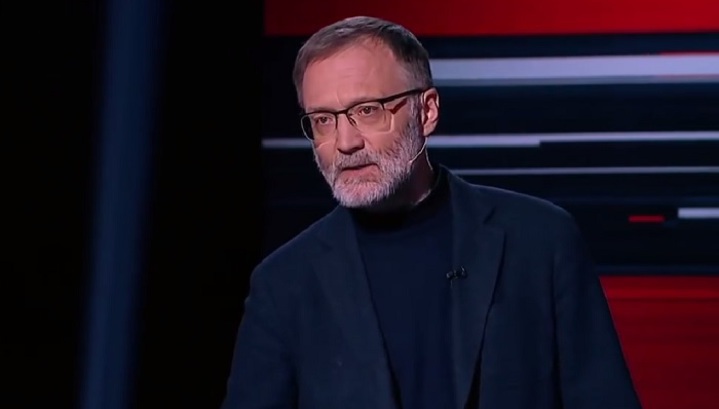 - We explained and showed everything to our citizens, and I think everybody's well aware that Russia hasn't been treated with such cynicism in a while. We understand that. We've set our priorities. But the thing is, nobody hears us outside of our borders. And some hear us but don't want to listen to us. It means it's a provocation. It's not the first one, just the most ruthless one. They are breaking the barrier of logic in their pressure against Russia by doing something no one has considered possible. With every step, they are lowering the bar for their critical attitude towards accusing Russia. In this case, they feel perfectly justified in using resources to increase their military spending, or to do something else that we've mentioned before, like to demonize Russia. What we're seeing is more and more of these fabricated situations where Russia is guilty until proven innocent, no matter what's going on, and they feel justified in doing this. Why? Because it's Russia. No evidence is needed when you mention the word "Russia". Here's a bright representative of their policy, who you tried to persuade during the break. He's been living here for 20 years. Why? Because Russia. They've got no other answers.

- Give me a second, Michael. Let's not interrupt each other for a second. Why? Because Russia can't do otherwise. We've got to admit that restoring trust will be extremely difficult, if not impossible. For many years, we've been trying to conform to some international system of obligations, some system of agreements, some system of trust. We used to discuss it a lot, claim that it was necessary because it would give us a chance to move forward and bring a new thaw, and so on. And here's their response to our goodwill. In the future, we'll know what it's like to look for trust in the West, what it's like to meet their own international requirements, and what's it like to search for common sense. Common sense only works when it works to their advantage. And if it benefits us even a bit, they aren't interested in it at all.

The question is: How do we adapt our behavior to the new situation? Because the new reality, where Russia is guilty by default, is already here. Yes, in a way, history is repeating itself. But currently, we are in a completely different geopolitical state than we were during WWII and before that. The state is different, and we need to understand how we are to act in this media environment where we're always guilty, but we still have to obey all international agreements to a tee. And we're constantly proving that we're crossing our T's and dotting our I's. "Look, we've done everything you asked for." We must develop another position. One that implies that for every nasty thing they do to us, they get a nasty response. Do we just trade Belgian guns for Range Rovers, for example? No, we can't mirror their actions. We must find an asymmetric answer, as our politicians call it, which would be situation-specific. Secondly, regarding the practical consequences. Skripal's case is being discussed and investigated. The only question is: Will this case trigger new sanctions against Russia? Because so far, they either can't impose them or don't want to. Because that would make the situation even more brutal. Will they be able to impose new sanctions based on this case? So far, the answer seems to be "no". But it certainly seems to be moving this way. And if they agree with the US on this matter, even a case as ridiculous as this one could turn into a problem for us. We need to plan what we're going to do.

- Well, let's expand on your ideas. First, Theresa May said we were not their strategic partners, but enemies, which signifies the return of the Iron Curtain. Russia should forget about Europe. It's basically what Theresa May is saying. But you've expressed a profound idea regarding agreements. We were the first ones to fulfill our commitments by destroying our chemical weapons. And we did that while being monitored by the West. However, the Americans didn't do it in time. Europeans, the British for instance, didn't do it in time.

And now, what are they charging us with? They claim Russia deceived them and didn't destroy its chemical weapons. They say we've got some secret laboratories. It basically means: “We are back in the chemical arms race because not only does Russia have hidden laboratories, but also, for the first time since WWII, it actually used a chemical agent in Europe".

- You see, that's the thing. What Mr. Bohm is saying is understandable, that's the American point of view. Its essence is pretty simple, you've told us about it. It's fairly simple, it goes like this: "We, Americans, can say and do whatever we want and still retain our reputation because we have power, period." That's pretty much it. "We've got power, and if you don't believe us, we'll either make your life miserable or simply destroy you." That's it. Actually, you, Michael, or rather the West, have discredited the notion of trust.

Trust doesn't depend on the number of allies. It doesn't depend on money. And it doesn't depend on your GDP. Trust depends on whether you keep your promises or not. Whether you tell the truth or lie. That's what trust is. But in your country, Michael, lies and truth have been mixed up. For you, money and power are truth. That's what you think truth is. For you, lies could also become true with enough lawyers and under the right circumstances. You see, the problem of the US is that it has swapped good with evil. You don't even see what you're doing in this world. You made money the ultimate truth. Follow the money, that's where the truth is. Tell me, American, what's the truth? It's money. And that's the absolute truth. It's the precise description of your civilization.

- You'll pay for Facebook. Why did you trick the whole world with your Facebook? Israel has started an investigation.

- Vladimir, please wait. Let the normal people who can tell the difference between truth and lies speak. Regarding trust, it has a manipulative aspect that might partially be true. You know why they're bringing up trust? Because we've been looking for this trust and they still don't trust us. We really want them to trust us. For thirty years, we've been catching every signal from the West. You see, that makes their position even stronger. That's why they're being so arrogant, saying their truth is the real one, and proclaiming us guilty without sufficient evidence. We should stop trying to earn their trust. We should stop rolling over, begging them to trust us. They see us trying and become more powerful and cynical. More cynical, you see. Meanwhile, a single question has always determined their trust: Can they get punched in the face or not? If they get a good punch in the face, and sometimes they get punched hard, all of a sudden, their circle of trust gets bigger. And if they understand that nobody will oppose them, the circle gets smaller.

- By the way, why did your president lie to his people after the incident with Monica Lewinsky?

- Michael, you've turned the world into a zoo. It's always been one, but you've made a complete mockery of international law, turning it into a zoo.