Putin And Modi Dream Team: Russian and Indian Partnership Now Closer Than Ever Before 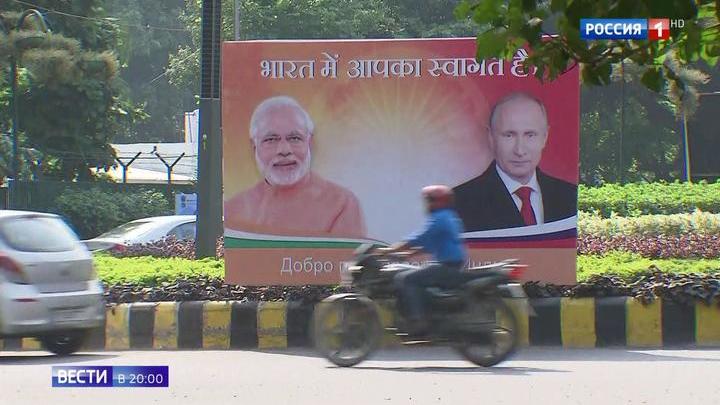 A traditional friendship and a privileged partnership: that's how Vladimir Putin and Narendra Modi described the Russia-India relationship. The leaders congratulated each other on New Year's in a phone conversation. The Indian prime minister sent his best regards to the Russians in connection with Christmas. Vladimir Putin invited Modi to the Eastern Economic Forum in Vladivostok as the main guest. With its current growth rate, India will become one of the world's three largest economies in the next decade and it needs the Russian weaponry, energy sources, and technologies.

Dmitry Melnikov will tell how to triple the amount of trade.

The personal relations have undoubtedly given a boost to the Russian-Indian relationship over the last few years. Those warm hugs during the latest ASEAN summit in Singapore are the best demonstration of the level of mutual understanding. The annual exchange of visits: Vladimir Putin visited New Delhi in October, meanwhile, the meetings between the two leaders at global platforms are the guarantee that the specially privileged strategic partnership is full with certain decisions. The leaders agreed to augment the efforts to fight global terrorism.

Over four months, from September to December of 2018, the Indian and Russian militaries held the joint exercise "Indra". The armies of the two countries have exercised an operation on the elimination of insurgents on land, in the sea, and in the air.

New Delhi considers that partnership relationship with Russia to be not only the tribute to the old friendship but also as a guarantee that the increasing economic pressure from the USA won't make India look at its foreign policy through the prism of American interests.

Nandan Unnikrishnan, vice president of the Observer Research Foundation: “The first conclusion to be certainly drawn is that it's too early to write off India as the USA's ally. Russia definitely won't lose its position. It reacts rather strongly to what happens in the world.”

The second important part of the partnership is the economic ties. We should increase the trade to the level of 30 billion dollars. The supply of the Russian weaponry is the main article in the shopping cart. The 5 billion dollar contract on purchasing the S-400 systems by India has topped all records. The "Brahmos" missile system, one of the most successful joint projects, has recently marked its 20th anniversary. For India, who is 75% dependent on imports, Russian gas and oil are a strategic industry. Indian companies participate in the development of the Sakhalin-1 deposit, while Gazprom is obligated to supply India with LNG, worth almost 2 billion dollars in total, over the next two decades. India is preparing to take part in the Russian energy projects in the Arctic and the Far East developments.

Narendra Modi will have an opportunity to see this region in person in September: Vladimir Putin invited the Indian prime minister to take part in the Eastern Economic Forum in Vladivostok as the main guest. There is a political high season in India itself because the elections to the Lok Sabha, the lower house of the Indian Parliament, are to take place in April, and the ruling party BJP, headed by Narendra Modi, is leading an unprecedented election campaign right now. It's notable that Russian observers will be present at the Indian ballot stations. That's why, among other things, Vladimir Putin wished Modi luck in the upcoming elections during the phone call.