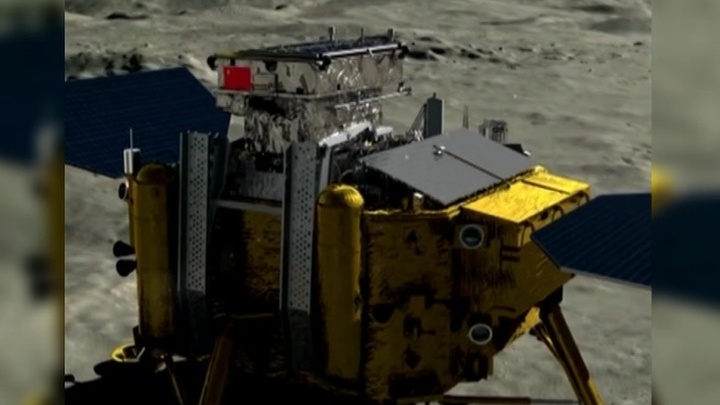 In the meantime, Jade Rabbit is walking on the Moon. This is the name of the Chinese rover which is exploring the dark side of the Moon with a Chinese pace indeed. It's farming all the way. Beijing is going to send it assistants in the near future. Russia will also participate.

Anastasia Sakhovskaya will tell us the details of the project.

There's life on the Moon! Yet it's inside a container made of aluminum weighing almost 7 lbs. The Chinese Jade Rabbit (that is how its name is translated) is equipped with a closed ecological system for testing. It plants potatoes and breeds silkworms in ultra-low gravity. This is not the only thing it's first at... It's the first to execute a soft moon landing, the first on the other side of the Moon, and the first to establish a connection to Earth from there via the first lunar in-orbit satellite. It's also the first to conduct testing in a pure electromagnetic environment, and it's the first result of planetary cooperation…

Several countries took part in the preparation of the mission.

Wu Yanhua, Deputy Head of CNSA: "Radioisotope heater units developed in cooperation with Russia ensure the safety of Chang'e 4 during the night on the Moon".

The next rover, Chang'e 5, will be ready by the end of the year to transport samples of lunar soil to Earth. It means it'll follow the success of the Soviet Luna 24. The Russian mission Luna-26 opens up new horizons of cooperation. A few rounds of negotiations are over, and now the Moon is a key point of interest for China together with Russia. It was stressed during the press conference that Russia is one of China's main partners in space.

China is ready to be our neighbors in orbit as well. At the new space station, three 20-ton modules are being built. The core module will be launched this year. The whole project will be commissioned in 2022.

Wu Yanhua: "The implementation of lunar research missions has led to creating a well-developed infrastructure for deep-space research".

A building made of lunar soil — fiction or reality? We can find out only by experimenting. Should a research facility be built on the Moon? China is thinking about it as well as Russia, the USA, and Europe. In any case, Chang'e's further missions suggest a series of technological tests, landing rovers at the north and south poles of the Moon. They will become the basis for new research. China wants to send the first mission to Mars in July of 2020, to deliver soil samples from there in eight years, and it intends to get to Jupiter by 2030. These are just the short-range plans.