Putin is Impressed! Russia’s Su-57s Jets Are the Greatest War Machines on the Planet! 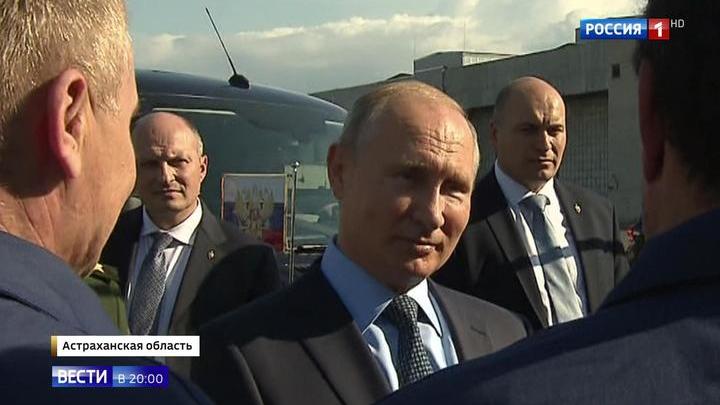 For the first time in history, the world is seeing such aerobatics as those performed by a group of Russian fifth-generation fighter jets. Su-57s rose up in the sky above Astrakhan to form an honor escort for the presidential airliner. Vladimir Putin came to the region in order to continue the grand conversation on the development of military technologies.

The meeting was classified but Denis Davydov has some details.

An air escort of fighter jets. The Presidential Board 1 meets the future of the Russian military aviation Su-57 — a fifth-generation aircraft. It's the first time they're flying in such a large group. Six fighter jets are flying in a single formation. And here's the footage from the presidential airplane. Putin got a special greeting because he was flying to the aviation capital of Russia. All Russian military aircraft are tested in Akhtubinsk. The Su-57 is the most recent release, as pilots put it. The aircraft has entered the mass production phase and will soon be adopted by the military.

Vladimir Putin had the opportunity to take a close look at the future of the Russian Aerospace Forces. The jets flew a thousand feet above the earth before breaking the formation in a spectacular way. Test pilots were preparing to meet the president and Putin visibly enjoyed the surprise. That was marvelous.

Vladimir Putin: First, you accompanied us, and then scattered across the sky. How do you like your new aircraft?

- We need it to be the best in the world. It's an aircraft we need.

The jet has not yet been adopted but NATO has already named it the "Razor". It does look like one. Ultra-mobile and stealthy, it's capable of engaging any ground or air targets.

The presidents inspected the latest Russian military aircraft. Drones, anti-aircraft systems, and Russia's most powerful weapon in the center of it: the Kinzhal. The missile has several advantages. It's supersonic, capable of maneuvering in the air, and its flight trajectory can't be predicted by the enemy. But the key thing is that nobody else in the world can launch such missiles from the air but Russia can. On the same airfield, Vladimir Putin held the second meeting on military matters in two days. They discussed secret prototypes. Every participant handed over their phone at the entrance and there was acoustic protection against eavesdropping around the tent.

Later, the president asked the officers about their daily lives and wages.

Vladimir Putin: How much do you make?

- But I'm a colonel, lesser ranks get less.

- I see. What about your living conditions?

- We get service housing. Those who serve 20 years get an apartment.

Sergey Shoigu: This year, we finished the construction of additional housing. We'll be expanding the personnel and building new infrastructure, kindergartens, for instance.

Upon leaving the center, Putin thanked the officers for their service. The test pilots have plenty of work ahead. The Russian Army is actively rearming.

The reasons why one of the most potentially rich Russian regions, Astrakhan Oblast, still has low wages, high unemployment, and out-migration, were discussed in Akhtubinsk, where Putin met with representatives from the federal and regional governments.

Polina Yermolayeva with the details.

The region where transport routes cross west-east and north-south: The location of Astrakhan Oblast implies that geography itself is supposed to help its economy.

Vladimir Putin: "Freight traffic in the Caspian region as a whole, including transport volume, is constantly growing. Yet, a large percent of cargo still bypasses Russia, and, naturally, our neighbors take it and they are right to do so — they're competing on the market. Why? Because they have modern high-capacity port and logistics systems".

The Olya port in the Volga Delta still isn't operating at its full capacity even though the decision to develop it was made a long time ago. In 2004, a railroad was built there. However, investors are hesitating, waiting for special economic conditions.

Anton Siluanov, Deputy Prime Minister: I believe that we ensure in advance that this zone doesn't only exist on paper. We'll need about 15 billion rubles ($230 million) of investment. It's a sort of a mutually beneficial contract: we remove practically all taxes but we'll need guaranteed investments.

- You need to work on this initiative. Just make it quick instead of chewing the cud for years.

Another long-standing issue is connected to the Krasnye Barrikady shipyard. The century-old facility is bankrupt. There aren't any orders, thousands of people have no work even though back in 2016, the president instructed to develop inland navigation.

Vladimir Putin: "There were specific instructions. The majority have been implemented but I'd like to check out the results. I've repeatedly said that our task is not to formally execute the instructions but to achieve results".

The eternal issue of Astrakhan Oblast's roads has reached the level of bridges. The issue is crucial for the region where the Volga splits into eight distributaries.

Sergey Morozov, Acting Governor of Astrakhan Oblast: "More than 1/3rd of the population lives in island villages. We believe that our priority is to repair 124 bridge structures".

Acting Governor Sergey Morozov spoke about simplified registration procedures for labor migrants and issuing patents through Multi-purpose Centers. Vladimir Putin suggests to think that through. The Ministry of Internal Affairs still needs to supervise the matter.

Vladimir Putin: "They leave Russia, change a single letter in their national passports, and come back here. That's why on the one hand, the patent procedures for migrants need to be accessible and not overly complicated but at the same time, there must be order".

Every detail gets discussed at the meeting, even the seemingly city-specific issue of storm drains. The region is closely associated with water but not close enough to consider it normal that any rain turns Astrakhan into a lake.

Vladimir Yakushev, Minister of Construction and Housing: "There used to be a storm drain system, we just need to reanimate it to make the city's downtown look decent".

Vladimir Putin: "We definitely need to do this. We can't leave the city in its present condition. So far, it's been impossible to cancel the second school shift".

Vladimir Putin: "The region is extremely important for Russia. I'm talking about its location and potential possibilities. They're simply huge, colossal. We aren't using their fullest potential. Undoubtedly, its development requires an additional stimulus that, I hope, will directly affect the social state of health and living standards of the local residents. We need to strengthen the region".

And yet, Vladimir Putin encourages them to request additional resources less often. Instead, the regions should effectively spend the trillions of rubles already allocated within the national project framework.