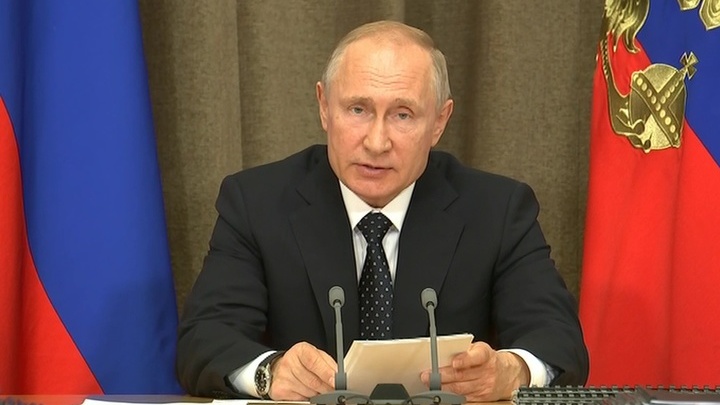 The troops have received over a thousand modernized planes and helicopters over the past five years. To date, over 65% of aviation assets are modern vehicles. This was stated by Vladimir Putin. The president held another military meeting in Sochi which discussed aviation issues.

Vladimir Putin: "Good afternoon, honorable colleagues. At our second meeting, we're going to discuss issues related to the aviation component of the Aerospace Forces; the main trends in the development of combat aviation and its equipment with modern weaponry; and views on how advanced aircraft are being built, including unmanned aerial vehicles. To begin with, over a thousand new and modernized aircraft and helicopters entered operational service in 2013-2018. As a result, to date, over 65% of aviation assets are modern vehicles. In total, the Air Force has over 3,000 aircraft, which are mostly cross-functional combat systems of long-range, operational-tactical, and Army aviation.

Their combat capabilities were demonstrated during the counter-terrorist operation in Syria. For example, Su-24M frontline bombers with a new guidance and navigation system used both conventional bombs, as well as high-precision weapons, which reduced the usage of air weapons severalfold. Our task is to continue to actively develop combat aircraft, to fulfill all of our plans, from the supply of most advanced aviation hardware and weaponry to the troops, to the training of flight crews.

What I would like to draw your attention to, dear colleagues, is as follows. Firstly, we've focused on the development and production of modern aircraft which will determine the combat potential of the Russian military aviation in the coming decades. The Su-35S and Su-57 multi-role fighters are undergoing the final stage of state tests. These machines have unique characteristics and are the best in the world. By 2028, three aviation regiments of the Aerospace Forces are to be re-equipped with the advanced fifth-generation Su-57 avionics. Yesterday, I discussed this with the minister at the proving ground. The armament program to 2027 provides for the purchase of 16 such aircraft. Having analyzed the situation, the minister reported that our agreement with the industries and all the work we've done — the industries reduced the cost of aircraft and armaments by almost 20% — allowed us to buy many more combat vehicles of this class and this new generation. We agreed that we'd buy 76 such aircraft for the same price within the same period. It must be said that such a scale... Well, it's not even about scale. The thing is that nothing of the kind has been done on a new platform in the last 40 years. I hope that the adjusted plans will be fulfilled. And in the near future, a contract will be signed for the delivery of 76 such fighters equipped with modern aviation weapons and provided with the necessary ground infrastructure. February of last year saw the first flight of the Tu-160M updated strategic bomber which is produced by the Kazan Aviation Factory n.a. S.P.Gorbunov. Today, I expect a report on the experimental development and mass production of promising aircraft and helicopters, as well as unmanned aerial vehicles.

Secondly, the combat capabilities of existing military aircraft and helicopters are to be increased by effective modernization. Thus, the power of the MiG-31 interceptor fighter aircraft has significantly increased, on the basis of which the advanced Kinzhal (Dagger) aviation system, equipped with a hypersonic aero-ballistic missile, has been created. The Tu-95 and Tu-160 strategic missile-carriers abs Tu-22M long-range bomber are to be consistently upgraded. All of them must be able to carry both the most advanced cruise missiles as well as other promising means of destruction. Moreover, the Army's helicopter fleet is to be equipped with modern airborne defense systems with improved characteristics as soon as possible as well as with the most modern weapons of increased range and supply of 100 Mi-28NM modernized combat helicopters to the troops by 2028.

Thirdly, the Russian air operation in Syria revealed a number of technical flaws in the planes and helicopters as well as the weapons used. I would like to draw attention to what you're already well aware of, but still, it would be impossible to detect those flaws during tests at proving grounds. Industrial enterprises are working to eliminate the problems that have appeared. We saw this when we visited the Kazan Aviation Plant and the 929th State Flight Test Center of the Ministry of Defense in Akhtubinsk. In addition, we were shown promising modern combat planes and helicopters, and drones.

I'd like to stress that all measures to prepare for the serial production of this hardware were taken as planned. I'd like you to work just as effectively in the future. Let's set to work".