American Lawfare in Action! Maria Butina Now Being Bled For Single Cent That She’s Worth! 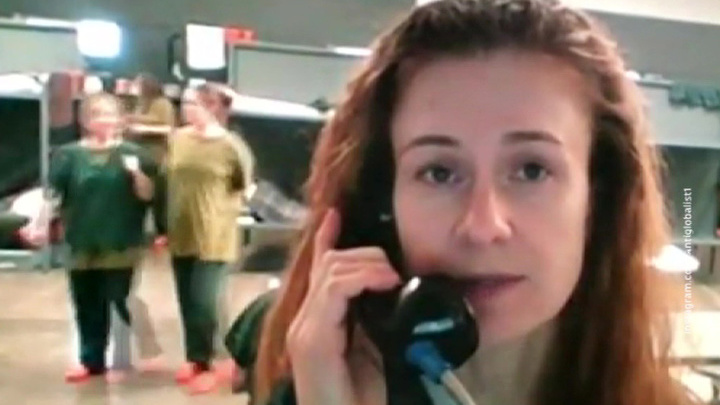 Maria Butina went through several circles of hell in American jail. Only several months later did she get an opportunity to address those who had been worried about her in order to ask them for help.

Georgy Podgorny will tell us what kind of help she requires.

- And serious support, no less than eight figures.

"Russians never give up", says Maria Butina at the end of her video recorded from her cell in Oklahoma. Her cellmates stroll in the background; there are double bunk beds next to the wall. Maria holds a phone receiver. She thanks everyone for their support and asks for money to pay for her lawyer.

Maria Butina: "I'd like to ask for your support and financial support. As you know, my lawyers have filed an appeal and we intend to fight against injustice that’s happening with me right now and with all Russian citizens. My case is a mere reflection of the current reality. So, if you have an opportunity to donate some money, any sum will make a difference".

If we translate Butina's debt into rubles, she owes her lawyers more than forty million ($620,000). Maria's father believes in the support of the indifferent people but also acts on his own. It's possible that Maria will write a book.

The Foreign Ministry reacted to Maria's plea for help, promising to do everything possible to support the Russian. On Rossiya 1, Maria Zakharova stated: "Butina is definitely aware that many people are worried about her".

Maria Zakharova, Spokeswoman of the Foreign Ministry: "You know that we don't pay for lawyers but we're doing everything to make sure that she has all of her rights as a Russian citizen. And naturally, since she outlined this issue, we'll try to do everything possible to help her".

- That could be done by our civil society.

Society has already provided support. More than two million rubles have already been transferred to the specially created Maria Butina Fund. The National Values Protection Fund also volunteered to help. It's ready to cover part of the lawyer fees.

Alexander Malkevich, president of the NVPF: "Russians never abandon their own in war. It would be stupid to deny that there's an information war going on against Russia. The sum is about forty-three million ($667,000). We'll check the papers and try to settle this. I believe we'll be able to cover some of the costs. Today is Monday, which means that we'll prepare the necessary documents this week in order to begin our work".

Over forty three-million rubles seems like an astronomical sum, bearing in mind that Butina only hired two lawyers. Both of them charge $850 per hour. Add in flights, hotels, and lunches. That means, according to the roughest estimates, after the ten months of Butina's imprisonment, she ended up with a debt of $670,000, which isn't that much.

Yekaterina Orlova, lawyer: “This company is 220th in the US. That allows it to charge high prices for its services. Besides, Maria Butina's lawyer was Robert Driscoll. He's the leader of the White Collar committee which takes part in government investigations. His qualifications are rather high so his $850/hr price tag is lower than similar price tags in the market".

Maria Butina will be released on November 5th. Before that, her defenders will be working, filing appeals and managing her case to avoid any kind of incidents. According to various estimates, her debt could grow by several million rubles.