Will the EU Even Survive? Eurosceptic Parties Set to Make Big Gains in Upcoming Elections! 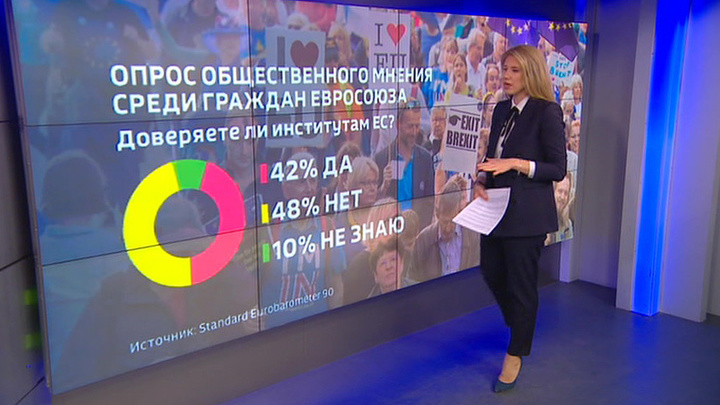 The position of the Eurosceptics is becoming stronger in the EU. Brexit hasn't taken place yet but is already playing into the hands of such movements on the continent.

Alevtina Penkalskaya has the details of the choice which Brussels has to make and the sentiments before the elections to the European Parliament in the project Choice of Europe.

There's less optimism and more skepticism. It seems that ordinary citizens have begun to feel uncomfortable in the big European family. Brussels isn't a loving parent for them anymore but rather a stern supervisor, whose control Britain is still trying to get out of to no avail. Opinion polls indicate that Europeans are dissatisfied. It's worth noting that not some external hostile force but the European Commission that conducts them.

Here are the recent results. Less than half of the European residents trust European institutions — just 42% of the respondents. The next question is: what do you associate with the EU? One in five Europeans answers that he has negative associations. One in three is simply indifferent. According to experts, the EU is now facing a number of crises, such as economic, migration, social, and a clear crisis of the elites.

Against this background, politicians proposing to withdraw from the EU don't just gain popularity but come to power in almost every EU country.

Daria Platonova, expert at the Center for Geopolitical Expertise: Of course, it takes Eurosceptics different amounts of time to come to power in different countries. However, this trend is absolutely clear. And the majority of European peoples agree with the Eurosceptics.

They came to power in Italy earlier than in the rest of Europe. The experts explain it by the fact that the country was among the first to admit millions of illegal refugees. And the general disillusionment with the EU is mostly connected with the migration crisis and Brussels's inability to solve it. 40% of Europeans think that this is the main problem of the union.

Dmitry Egorchenkov, political analyst: The problems which the EU recently faced spurred that. There's higher terrorist activity in Europe, the inability of the European tools to combat that wave of terrorism quickly and efficiently, as well as the migration wave.

A year ago, the Conte government came to power in Italy. This is a coalition of two Eurosceptic parties. Matteo Salvini, who became deputy prime minister, openly shows his dissatisfaction with Brussels's policies. Thus, Italy blocks the European recognition of the Venezuelan insurgent Guaido as president. Salvini is against the anti-Russian sanctions and even supported the movement of the French yellow vests. It caused strong indignation in Paris.

In addition to the geopolitical protest, an economic one is developing in Italy. Rome and the European Commission violently debated Italy's budget deficit last year. Brussels prohibited Rome from adopting its budget. In December, they seemed to agree on a figure a bit higher than 2% of GDP. But it turned out to be not that simple. In April, the Italian Ministry of Finance stated that it won't reach the budget deficit target. It seems that the argument between Rome and Brussels isn't over yet.

However, not only Italy but all of the countries are against the EU's dictates. And even the brains and the main locomotive of Europe — Germany — is among them.

Stefan Koiter, member of the Bundestag from the AfD party: Many people living in the European Union have the feeling that the EU wants to gain full power and make decisions for all of the national parliaments. I'm a member of the committee on finance in the German Bundestag, the German parliament. We receive lots of regulations from the Economic and Financial Committee of the European Union. At the same time, we can only adopt, familiarize with them, and implement them into our national laws. This situation causes lots of problems not only in Germany but in many other member-countries.

Eurosceptics are also gaining popularity in Germany. The biggest association is the party Alternative for Germany. Take a look. In the 2013 elections to the Bundestag, they failed to overcome even the 5% threshold. And in 2017, they gained almost 13% of the votes. Here are the recent polls. Alternative for Germany is already the leader in the east of the country. Almost one on four citizens support it there.

We can talk a lot about Eurosceptics in every EU country. They're the National Front headed by Le Pen in France and the Finns Party, which was the second most popular in the parliamentary elections a month ago and lost by just 0.2% to its rivals. At the elections for the Netherlands's local governments in March, the non-systemic Eurosceptic party Forum for Democracy won. Not all of those forces openly talk about withdrawing from the EU. But all of them are sure that radical reforms are necessary.

Javier Couso Permuy, independent MEP from Spain: I suppose that there's much pessimism and skepticism because Europeans feel that the EU acts on the instructions of large banks or large corporations but doesn't fulfill decisions which can be taken by the peoples which it consists of. That's why I'd say that pessimism prevails among the majority of the EU population.

Against the background of those unexpected victories of Eurosceptics at the national level, the elections to the European Parliament will be held. It's possible that after becoming systematic politicians, they'll tone down. But they'll continue to strive for changes in any case.

Experts say that the countries, which joined the EU not long ago, are the least eurosceptical.

Daria Platonova: They're various Eastern European countries. There's little euroscepticism in them, firstly, because those countries didn't fully experience the outcomes of the migration crisis. They were on the periphery of the flow of refugees. Secondly, it's because of the influence and dominance of American supremacy and the American doctrine is much stronger there.

But the main question is: is there an exit from the EU? The situation with Britain showed that it isn't that simple. Despite the referendum and free expression of the people's will, three years later, London is still in the EU. Every time, there are new delays. Euroskeptics can gain a lot of votes at the elections to the European Parliament. And the struggle for changes can become very tense.