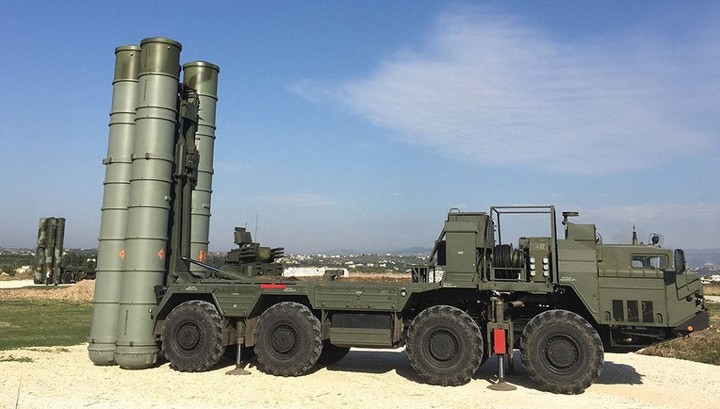 - Hot on the Trail. Washington has put Ankara on a clock, a measure it can afford. After realizing that it can't persuade Turkey to give up the Russian S-400 systems, America began speaking the language of ultimatums. Can you imagine that? It's giving Turkey two weeks to choose between the Russian S-400 and the American Patriot systems. If Ankara chooses wrong, it loses the American F-35 fighter jets, faces sanctions, and has to deal with NATO.

- The Kremlin considers such demands to be unacceptable. Naturally, Turkey is trying to appeal to the F-35 fighter jet supply contract, which doesn't say anything about the Russian systems. In general, it's obviously not about Turkey but Russia. Washington is using that. It uses any possible argument in this game, let's hear it.

"Turkey has a little more than two weeks to decide whether to complete a complex arms deal with the US or risk severe penalties by going through with an agreement to buy an S-400 system from Russia according to multiple sources familiar with the matter. By the end of the first week of June, Turkey must cancel the nine-figure Russian deal and buy the US-made Patriot missile defense systems or face removal from Lockheed Martin's F-35 program, the forfeiture of 100 promised F-35 jets, the imposition of US sanctions, and potential blowback from NATO. The US State Department's current offer is the final one. Multiple sources confirmed it when asked if the deadline could be rescheduled".

- Another story will crash on us in the next few days. Capitol Hill is likely to consider sanctions against the Nord Stream. The Financial Times has a big article on that, here's the summary.

"The US Congress is eyeing sanctions on Russia's Nord Stream 2 pipeline. Any sanctions would be a blow not just for the project but for Russia's economy, giving fresh momentum to a five-year-long sanctions regime against Moscow, which has cut off some of its biggest companies from foreign banks and effectively banned many of its most prominent businessmen from doing business in the West".

- We've been so approachable lately, haven't we, Mr. Rybakov? But for some reason, dialogue doesn't seem to work. We talk with everyone, we meet with Pompeo, we're ready with talk to Zelensky. No one cares.

Nikolay Rybakov, Yabloko Party: Right, you're ready to talk with Zelensky but continue handing out passports to the citizens of Ukraine. And frankly speaking, I'm not sure if you're ready to talk with the new Ukrainian authorities. The thing we've seen on the screen is, regrettably, most regrettably, proof that our foreign policy has jeopardized the Russian economy and the development of many industries in our country. That's true. Our inefficient foreign policy…

- So Russia's inefficient foreign policy was able to jeopardize even the Turkish economy? Is it so inefficient?

- I couldn't care less about the Turkish economy.

- We're talking about defense industry, jobs, paychecks, and so on.

- That's why I'm saying that the ill-considered actions…

- What actions exactly? You like to speak specifically, don't you? Which foreign policies of our big, great, wonderful country of Russia resulted in Turkey receiving an ultimatum from the United States.

- Turkey got an ultimatum because of its relationship with Russia. The reason is that Turkey wants to buy those systems from Russia. You're perfectly aware of the fact that the war in Donbass…

- The war in Donbass is the reason the US wants to sell its Patriots to Turkey.

- That's another example of how our economy loses money due to our foreign policies.

- You're wrong, Nikolay. You don't understand anything about the matter. The conclusion we should draw America just wants to sell the Patriot to Turkey.

- They want to make Turkey purchase the American systems instead of our S-400. Same as America wants to sell Ukraine its liquefied natural gas.

- That's called economic warfare and dishonesty. And you won't believe me when I say that it's not Russia who's dishonest but America.

- Olga, we're losing because our government is inefficient.

- Our government is absolutely inefficient because it…

- I'm sorry but you keep saying the same thing, blah blah blah. — Let's phrase the general idea. — Blah blah blah is our foreign policy. No, it's what you're saying. Name the specific actions... We'll discuss whether our economy is powerful or not a bit later. Name specific actions that led to this situation. According to what you say, if Crimea hadn't returned to its motherland, then Turkey wouldn’t have received this ultimatum. Is that what you mean?

- What do you mean then? Name Russia's specific actions that led to this ultimatum.

- If Russia had a serious…

- A serious foreign policy is not a specific action.

- Wow, that was unexpected.

- We'd never be able to get Crimea back if we had inefficient foreign policies. Facts, give us facts.

- Don't gloat or you won't get elected.

- I meet ordinary people, I hear what they say about the real situation in our country. And if you believe that it's serious politics to say that we're interested in a peaceful Donbass and proceed to hype handing out Russian passports.

- Our foreign policies can be considered successful when Turkey flips the bird to the US and purchases our systems. That will be the sign that our policies are successful. We hope that it will happen.

- You're not a new person on television.

- You're getting older, Mr. Rybakov but you still talk like a political newbie. It's not hype, people are dying in Donbass.

- We'll be next country to get the bird. Go try to manipulate China.

- Each particular action must be discussed separately.

Nikolay Kalmykov, analyst: The dear cowboys recall their historic memory when they used to forbid the natives to deal or trade to prevent them from developing. They consider the entire world to be a large reservation, judging by their statements when they forbid another independent country to do something and give it an ultimatum. Moreover, the country's located on the other side of the globe. Mind you, Turkey is located pretty far from the USA. In general, that's a matter of economy, there's no doubt about that. Turkey is free to take any measure in order to ensure its national security. If it completely depends on another country in terms of technology supply it would be dependent in terms of security. What if there's another attempt on the president and they won't be able to provide air security? What if something else happens? What if they face sanctions? Et cetera.

- There was a coup attempt. Turkey has enough issues, including some armed conflicts.

- The cowboys' desire to sell their weapons or to become an arms dealing monopoly for Turkey is just their whim.

- In fact, in the last few weeks, we've been observing a clear hierarchy in world geopolitics being built. There's the higher echelon of states, the USA and China.

- The entire world is primarily concerned about the global chaos.

- Here we have the USA and China. In the trade between the USA and China, there's the second level of states, which currently includes Russia. Those states can either join the USA or China. In Russia's conflict with the USA, Turkey is the second-level state even though in this case, Turkey is much more independent. Why? Because that's Erdogan's game. That's not Russia's or USA's game. That's Erdogan's, who cleverly wiggles carrots in front of both Russia and the USA creating trade and conflict zones.

- Our carrots are the best carrots.

- Right, don't be ashamed of your complexes, I absolutely agree. Right now, Erdogan's primary concern is to deal with the Kurdish security issue. Both America and Russia are going to help him with that thanks to the Syrian conflict. In order to do that, he's taking very gentle steps. There's a high chance that the situation surrounding the S-400 isn't about the economy. The Nord Stream is exclusively about the economy. The statements that the USA wants to supply its LNG to Ukraine are laughable.

- That's one of the reasons.

- Poland has them. Perry said that, he's their Secretary of Energy.

- There are a lot of funny aspects, but that's not the thing.

- It's great that you've finally realized that. We also consider it funny. They don't even have enough gas.

- They've got plenty of gas.

- No, they don't. Besides, there's no terminal. They came up with a new model and feed gas to Ukraine through Poland.

- This case is exclusively about the economy, that's a fact. It confirms what I've been saying for a year now: Trump values the economy more than politics. And when it's about politics…

- Those things are interdependent.

Sergey Markov, analyst: Now, speaking of Turkey and America, my humble forecast is that America will fail. Erdogan will buy our S-400. They've already made one stupid mistake.

- Does that apply to Turkey or their affairs in general?

- First, they'll fail in dealing with Turkey. After a while, the cunning Erdogan will make a nominal purchase of their Patriots to balance it all out. If they refuse to sell the F-35, which Turkey's already paid for.

- They can have multiple missiles, one of them can be a small Patriot.

- That would be fine. In that case, Erdogan will purchase our fighter jets.

- Russian specialists are already working in Turkey, teaching the locals to use our equipment.

- And when we'll be negotiating the Su-57, America will…

- You know, as a citizen of Russia, I'd be strongly against the top technologies of the advanced Su-57 model, even though I liked the name T-50 more, going to a NATO country.

- That's an article of commerce.

- I believe that in the near future Turkey will possibly be a NATO country and an ally of Russia at the same time. Such complex geopolitical combinations are possible. Those are mutually exclusive. And when Erdogan begins negotiations for the purchase of the Russian Su-57, America will panic, realizing that it lost an opportunity to sell their F-35 to Turkey. This time, they'll demand that Turkey purchase their F-35 instead of the Su-57. That's the way the Middle Eastern politics develops. We're steadily moving in the right direction, pulling Turkey towards us.