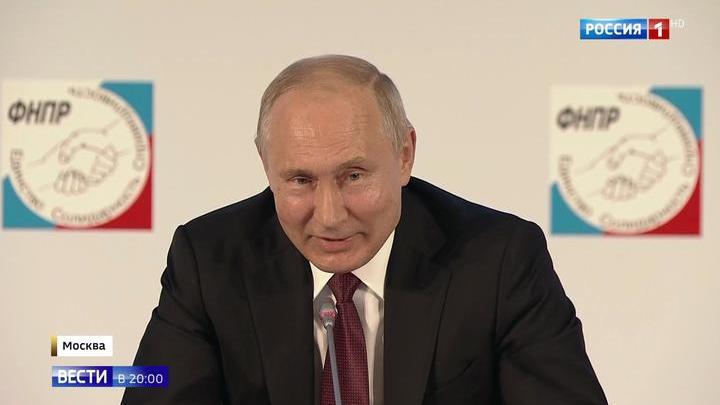 Today, the President instructed the government and regional authorities to more actively protect the rights of workers along with employers and trade unions. Vladimir Putin spoke at the Congress of the Federation of Independent Trade Unions of Russia. It brought together hundreds of delegates who represent 20 million members of trade unions across the country. Everything related to working Russians was discussed — from salaries to electronic work record cards.

See Andrey Grigoryev's report on what concerns trade unions the most and how the state responds to their proposals.

It's a five minutes' walk from the Izmaylovo Kremlin, and it's where the country's union leaders discussed how to make the Russian economy fair. This is the largest public association of Russia. There are at least 20 million people in trade unions. This is the tenth Congress of the Federation of Independent Trade Unions of Russia. Even the very name of it emphasizes its independence. But it has long been working together with the state when protecting workers' rights.

Ways of further cooperation are marked by the president today. First of all, it's national projects.

Vladimir Putin: “They're built around a person. Because in today's rapidly developing world, assets, products, technology, certain and natural resources may go to zero in an instant, but a person, their talents, education, and skills, always remain valuable. Therefore, the main goal of national projects is to raise the level of citizens' well-being, to ensure the accessibility and quality of education and health care, support the family, and reduce poverty. By and large, the trade unions are also striving to achieve this in their activities.”

Ideas that have arisen in trade unions are often adopted by the government. An employee-friendly decision is often born in a dispute. But such discussions are not to be feared.

Vladimir Putin: "It also happens that the owners or administrations of enterprises simply refuse to have a dialogue. They deliberately distance themselves from the trade unions. Such arbitrariness and despotism are absolutely unacceptable".

The head of the trade unions recalled how to act in such cases and how the president had already acted.

Mikhail Shmakov: "I want to give you a message from the town of Pikalyovo, where on June 4th, a decade ago, you called for social responsibility from well-known employers, who have been treating their employees well ever since. And we have a letter of appreciation for you".

Pikalyovo is an indicative episode of Putin’s relations with employees and employers. In 2009, employees of local factories didn't receive salaries for half a year due to a conflict among the owners. But the President insisted that the owners should immediately sign an agreement.

Vladimir Putin: "Come here and sign it. Come here. Here's the agreement. Give me my pen back".

The trade unions have new proposals — to index the salary in advance each year, to raise the monthly minimum salary to $230 a month, and also to put restrictions on withdrawing money out of the country.

Mikhail Shmakov: "Practice shows that despite the generous tax policies we currently have in Russia, money keeps flowing out of the country".

Vladimir Putin: "Well, it flows out of the country but it also flows in and the volumes are increasing. I've said it already and I don't want to repeat myself. I stressed to our businessmen that they shouldn't rely on their deposits abroad. Times might get hard for them. This time has practically come. I draw your attention to the fact that the largest investments come from Cyprus and the Netherlands. This is merely the repatriation of capital".

This means that confidence in the Russian economy is growing. As for the labor legislation, the international labor organization assesses it as one of the best in the world.