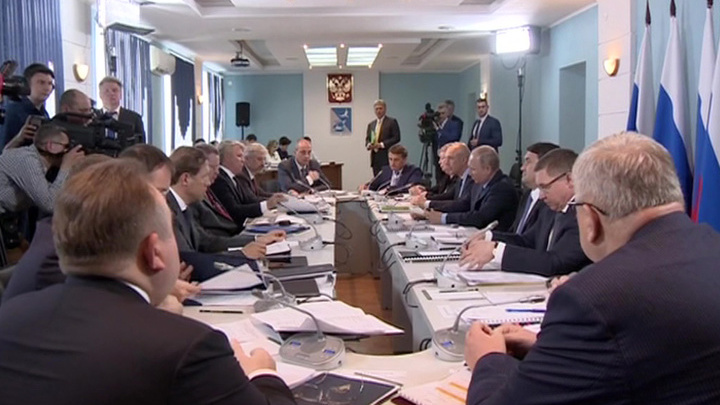 Now we're getting back to Vladimir Putin's trip to Astrakhan Oblast, which took place the day before. The presidential plane arrived in Akhtubinsk, accompanied by six Su-57 fifth-generation fighters. On the ground, Vladimir Putin was shown the latest models of equipment, and then the head of state held a meeting on the social and economic development of Astrakhan Oblast. He also met with the acting governor of the region, Sergey Morozov.

Polina Yermolaeva has the details.

This is a region where the transportation routes of the west and east, the north and south, intersect. Astrakhan Oblast is located in such a way that it seems the geography itself should help the economy.

Vladimir Putin: "Cargo traffic in the Caspian region, including transportation traffic, is constantly growing. But significant volumes of cargo still bypass Russia. Naturally, all of it is taken by our neighbors. They have to compete on the market which is the right thing to do. Why? because they create a modern, powerful port and logistic systems".

The Port of Olya in the Volga Delta is still not working at full capacity. although the decision on its development was made long ago. In 2004, a railway line was built here. But investors are reluctant to come here. They're waiting for special economic conditions.

Vladimir Putin: "Our Caspian neighbors have gotten rid of the taxes".

Anton Siluanov, Minister of Finance: "We have to agree here that the zone is created not just on paper. Investors should invest about 15 billion rubles ($230 million). That would be a fair agreement when we get rid of practically all of the taxes but, in return, we receive investment".

- Please, work the agreement through but don't protract the process for years.

Another long-term issue is related to the Red Barricades shipyard. The century-old enterprise has gone bankrupt. It doesn't have contracts, thousands of people don't have jobs. Although the president instructed to develop river navigation back in 2016.

Vladimir Putin: "There were certain orders which were mostly fulfilled. But I'd like to draw your attention to the results. I've repeatedly said that we shouldn't take a formal approach to the implementation of the orders. We should achieve results".

The perennial problem, the roads, in Astrakhan Oblast has reached the level of bridges. This is a vital issue for the region, where the Volga divides into eight distributaries.

Sergey Morozov, Acting Governor: "Over a third of the population of Astrakhan Oblast lives on the islands. We believe that, first of all, it is necessary to repair 124 bridges".

Acting Governor Sergei Morozov also talked about simplifying the procedure for registering labor migrants, granting patents via multi-functional centers. Vladimir Putin proposed to think the issue over. This issue should not be left without control from the internal affairs bodies.

Vladimir Putin: "Some of them leave Russia, change one letter in their names and change their ID, and then it starts all over again. That's why, on one hand, we should create jobs by patents for migrants without making it all too hard, it should be accessible, but, on the other hand, everything should be under control".

At the meeting, problems were discussed in detail, even purely urban topics, such as storm drains. The region is connected to water but not to the extent that you have to swim in the downtown after rain.

- This storm sewer existed. We just need to repair it so that the downtown will look decent.

Vladimir Putin: "It's definitely something to be done. We can't leave the situation in the city like this".

Abandoning the second shift in schools isn't yet possible. The construction of new schools continues. Large medical centers are being built, and medical and obstetric centers return to remote villages. Astrakhan Oblast needs additional funds for the resettlement of emergency housing.

Vladimir Putin: "The region is extremely important for the Russian Federation. I mean its location and potential which is huge, colossal, but isn't being fully utilized. Without a doubt, it needs a stimulus to progress. This will hopefully directly affect the well-being of the people who live here. We need to strengthen the region".

Nevertheless, Vladimir Putin encouraged them to not ask for additional funds too often. Instead, the trillions of rubles allocated within national projects should be spent more efficiently.