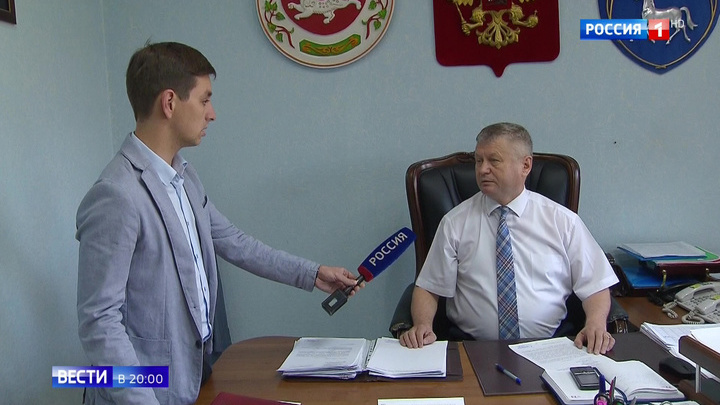 A Khakass official may face up to six years in prison for attacking a VGTRK journalist. The head of one of the districts, Sergey Zaitsev, was infuriated by a usual question from our colleague, Ivan Litomin, who asked why dozens of fire victims have been living in inhumane conditions for four years. Instead of answering, Zaitsev attacked the journalist. Now he's going to stand trial for assault, and, apparently, for being indifferent to the problems of the locals.

This is his first interview after he attacked a national television journalist. The head of the Shirinsky district, Sergey Zaitsev, is calm and imperturbable. I prefer to act according to the law, not according to emotions. However, the official unleashed his emotions during this conversation. The Vesti: Call Center legal program journalist tried to ask the official a simple question — why the residents of the district who had suffered from wildfires four years ago had to survive rather than live.

In April 2015, more than half of all houses burned down in the village of Shira. 12 people died. Numerous attempts to ask the authorities for help yielded no results.

Ivan Litomin: "Calm down! What are you doing?!"

Earlier, Sergey Zaitsev said the crew had scared him by appearing in his office, they didn't show their press cards, and asked unpleasant questions. But the footage shows that the journalist said his name, showed his press card, and knocked on the door before entering the office. Knock, knock.

Ivan Litomin, journalist: "It turns out that absolutely any resident could end up in such a situation and get attacked by this official".

Criminal proceedings were initiated for assault and battery of the journalist. In the nearest future, Zaitsev will be called in for interrogation.

Yulia Arbuzova, Investigative Committee: "He is suspected of obstructing the lawful professional activities of journalists using his official position combined with violence against a journalist".

The official has already got priors. In 2015, Zaitsev was accused of negligence. He did not provide the necessary fire safety measures. The court sentenced him to four years in prison. But the official was able to get amnesty and returned to his duties. Judging by this footage showing Zaitsev's house, he lives just fine as opposed to the fire victims.

- Would you live in such a house?

- That is an improper question.

- Improper because you have a nice house, right?

- Why the hell did you come here?

- I beg your pardon?

The Russian Union of Journalists promised to examine the circumstances of the incident.

Vladimir Solovyov, Chairman of the Union: "This will be an example for other officials. They should understand how to behave correctly with representatives of the media".

We received a reaction at all levels. The actions of the official were condemned by the Federation Council and the State Duma.

Alexey Pushkov, Federation Council Member: "He says he was provoked. No matter what questions the journalist asked, he didn't have the right to do anything of the kind."

Leonid Levin, State Duma Committee on Media: "If the district head acts like this with journalists, how does he behave when talking to the residents, let alone his subordinates?"

After the incident went public, Zaitsev was expelled from the United Russia party. Earlier, the General Council apologized for the attack on the journalist.

Evgeny Revenko, State Duma Deputy: "Any official, especially a member of the United Russia party, is obliged to answer any questions, even if they are unpleasant or inconvenient".

In the near future, Zaitsev will have to testify not only about the attack on the journalist but also about the reason why the fire victims didn't receive any aid.