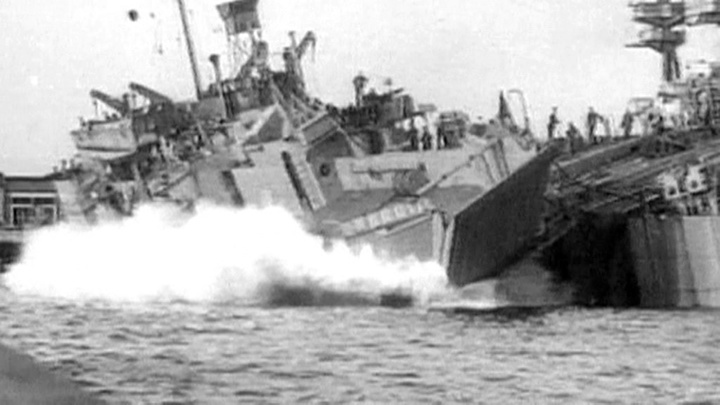 An exhibition entitled The Second Front was opened today at the Museum of the Great Patriotic War. It is timed to the 75th anniversary of the Allies' opening of the second front, in June of 1944. The exhibition is impressive. There were more than 200 items — from the authentic uniforms, ammo, and armaments of the American and British militaries to the personal belongings of Admiral Nikolai Kharlamov, the one who played a key role in creating the well-known Arctic convoys.

Also, there are exhibited elements of uniforms of the participants of the legendary Elbe Day. All this together is another reminder that the defeat of Nazi Germany was the result of joint effort, cooperation, and international assistance.

However, the West prefers to forget about it today. This is evidenced by the organization of the celebrations in Normandy, where European leaders and diplomats celebrated Normandy Day the way they always do. For example, Angela Merkel was invited there. Here, in the corner. Although it's... Well, you get it. Donald Trump was also there. But they didn't intend to invite presidents. Or maybe they pretended they didn't. It's all to justify a clearly political decision. Stanislav Bernvald will talk about it right now.

- Now, it's another Western party without the Russian leader, right?

- It seems they messed something up. In fact, the president of France also missed the main events. There are no comments on the fact, but there's some indignation about it.

The opening of the second front was long awaited. When the outcome of World War II was obvious the Allies decided to take part in the war.

Gennadiy Kovalev, veteran: "We waited for it. It was pretty bad in 1942-1943. Also, it was told there had been meetings with the Allies, they had promised to open a second front but they postponed it to the last moment".

At the Museum of the Great Patriotic War today, it was said a lot that the opening of the second front was an anticipated event and it undoubtedly advanced the long-awaited victory by breaking the Nazi's backbone. However, in recent years, our former allies have been saying more and more frequently the victory became possible only due to their efforts and the role of the USSR and the Red Army was insignificant.

Andrey Kokoshin, Academician, First Counselor: "The exhibition opened here today at our wonderful museum shows Russia's honest and unbiased approach to the history of World War II since the opening of the second front is shown here which was a major event in World War II. This is done in the context of the attempts to belittle the role of the USSR and our people in this victory".

It should be noted that the opening of the exhibition, a pretty interesting one by the way, wasn't attended by representatives of the allied countries. Not a single one of them. Even though they received the invitations. By the way, thanks to Admiral Kharlamov, who since the fall of 1941 served as the Soviet Embassy's naval attache in the United Kingdom, the British and Americans troops were able to tactically prepare for Operation Overlord. It means without the military training conducted by the Soviet military leadership for the Allies, the opening of the second front would have been an impossible task.

Yekaterina Burlakova, Kharlamov's granddaughter: "Nikolay Mikhailovich Kharlamov as the head of the Soviet military mission was invited by the United States. He was in Scotland for several months and advised American admirals on naval tactics because the British had been known to be excellent naval specialists, while the United States didn't have much naval experience at the moment".

"Marking the 75th anniversary of Operation Overlord without Russia is a lack of logic and historical memory". This is a comment on the article by Brett McLeod in an Austrian newspaper. Here's some more: "Have they forgotten that they were the 'second front'? In the east, Soviet troops took the brunt and it was they who liberated Europe." This is a comment from the Austrian audience.

Stephen Ebert, journalist, political analyst: "We know that we, the Americans, are exceptional people. It's a shame that they can't even assume that we in the West should be grateful to the Soviet Union back then and now to Russia for defeating Hitler".

History can't be put into the subjunctive mood. If our Western partners and allies understood it, we wouldn't have to say it louder and louder about the attempt at rewriting history, about the expulsion of important landmarks, persons, and even countries out of it.

- That was Stanislav Bernvald on prejudgment.