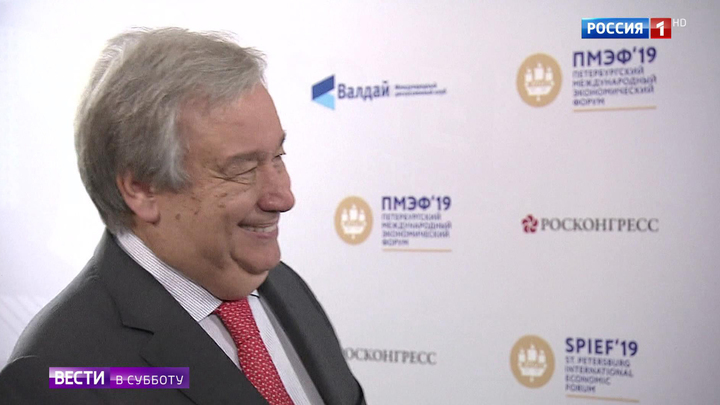 Of course, it was interesting to know what they're expecting from Zelensky, and not only in Moscow. We turned to the UN Secretary-General, who took part in the plenary session.

- Mr. Secretary-General, thank you for your time.

- Speaking of Ukraine, what do you think its new president's relations with Russia, Europe, and its partners from the Normandy contact group will be like? What's happening to Ukraine now?

- As to this issue, there's a specific action plan provided by the Minsk agreements and the work in the Normandy format. I hope that the new president of Ukraine will act as a catalyst for the success of this work. If dialogue is activated and specific results appear, it can be considered a significant contribution to ensuring security in Europe and all over the world.

- It seems that the international community is already tired of this whole Ukrainian mess, right?

- The international community is tired of all the conflicts that exist in the world. I remember the times when I was a student. Reading history books, I clearly learned that in wars, there were always a winner and a loser. In the armed conflicts of our time, we all lose. There are no clear winners. The wars just continue. Sometimes they go into a state of a frozen conflict, sometimes they escalate. Ultimately, there are no winners. Therefore, we advocate a dialogue.

- Actually, Russian-Chinese relations dominate the agenda of the St. Petersburg forum this year. What does Russia and China mean to you? Are they allies, friends, partners, just neighbors?

- The UN views Russia and China as two fundamental partners. First of all, the Russians and the Chinese are permanent members of the Security Council. They took part in creating the UN. Of course, they're now key actors in the world's arena. I strongly believe that the modern world order requires a multi-polar system with the participation of China, Russia, the U.S., India, and the European Union. As of now, there's a chaotic situation in the world. Relations between states are often not based on international law. Government mechanisms for communication are rather weak. Therefore, I believe that Russia and China can make a serious contribution to shaping a new multi-polar world with a stable legal system.

- Thank you so much.