US Plans Energy Grid Cyber Attack on Russia! Deep State Gloats About Carnage It Will Inflict! 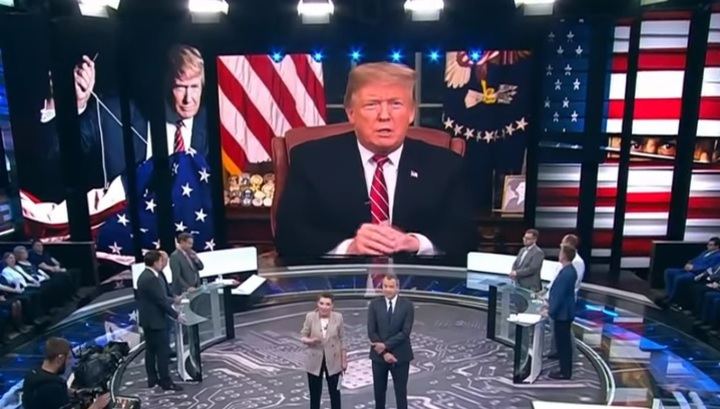 This is a 60 Minutes program about major developments.

- Do you remember interference in the American election? Now, there's a tremendous scandal. The Americans decided to respond by introducing a secret code into our electrical grid. The US president turned out to have a special button, and if he wants — bang! — and the lights go off here.

"The Russians attacked our election, now the US is preparing a blowback on electrical power stations, not polling ones".

"It's being described as unprecedented interference into key Russian infrastructure, a warning to the Kremlin: the United States is ready to attack if a serious conflict arises between the two superpowers".

"In cyberspace, you may prepare the battlefield as if you sent an aircraft to Russia".

"There's a reason for these privileged access measures. We often want our opponents to know our capabilities. We do this with the terrorists".

Mike Pompeo, US Secretary of State: "I saw the story this morning. I can't comment on intelligence work and matters. Over the past 2.5 years, President Trump has made himself clear. We'll do our best to prevent any country from interfering in our election. And we'll continue our efforts".

"The details of the cyber-operation are still classified, but the question remains whether the US really can cut off the electricity supply in Russia and at what cost?"

Evan McMullin, former CIA operations officer: "The use of these tools may prove to be lethal. Cutting off electricity supply for thousands or millions of Russians may provoke car accidents, or breakdown of equipment which maintains people's lives in hospitals and at homes".

- Maxim Anatolyevich, you'll have to cover the news as there won't be any TV. Trump pushes the button, the electricity goes off all around Russia, waking the cyber soldiers from the story we showed you some minutes ago. What's all this nonsense about?

- Newspapers will increase in circulation!

Maxim Yusin, Kommersant commentator on international affairs: Actually, I do understand Trump's emotional reaction, when he labeled the statements as referred to his own team members as an act of treason. I would describe it as a pointed, subversive action. I don't know whether they are Trump's rivals or not, but, certainly, they are against an improvement in Russian-American relations.

- Hold on, by calling that an act of treason, Trump confirmed the existence of the button and the secret code, which can cut off the electricity supply in the Russian Federation.

- I also think that he confirmed that, which is rather worrying. What is even more worrying is that, if you remember, those statements…

- It creates a certain emotional background for a possible meeting in Osaka.

- To wreck the meeting, actually. Well, we all understand what happened. They'll cut off the electricity in Osaka!

- So, Trump says: "Yes, the button exists, but why did you tell that to the Russians?"

- "And wrecked the meeting with Putin!"

- His military entity must have pointedly leaked the information to the New York Times. It's likely to be Cyber Command, which has recently been created and has had nothing to do.

- Why not cut off the electricity in Russia? Today in Kaluga, tomorrow in Voronezh.

- This is true! Trump is indignant. It's them whom he calls traitors. But he can't name certain persons. We'll see who'll be punished soon. While they can't... So far, Argentina and Uruguay have been punished.

- While they can't cut off the electricity, they cut off the water supply in some neighborhoods for a week. And they did that successfully in the summer.

Jakub Korejba, political expert, Poland: If I may, you underestimate the US administration by a great deal! It works well and in a professional manner, creating the right background for the president and his administration to make the right decisions.

- And indeed, the USA is supposed to have some tools to protect itself from its enemies.

- Either Trump or his administration is certainly lying.

- There can be various discussions. There can be different views. I understand that it sounds weird to you, but the USA really has polarized views…

- Weird to us? It's you who always accuse us of having a lot of towers and not knowing what these towers are doing.

- In this case, I welcome the US's capability to protect itself and its allies, meaning us, from the enemies of the free, Western world!

- Why didn't they tell Trump about that capability? Let's listen to Trump, who's very indignant. Perhaps he's bluffing, but it looks quite persuasive.

"Do you believe that the Failing New York Times just did a story stating that the United States is substantially increasing Cyber Attacks on Russia. This is a virtual act of Treason by a once great paper so desperate for a story, any story, even if bad for our Country and also, not true! Anything goes with our Corrupt News Media today. They will do, or say, whatever it takes, with not even the slightest thought of consequence! These are true cowards and without doubt, THE ENEMY OF THE PEOPLE!"

Nikolai Platoshkin, head of the international affairs and diplomacy department, MSU: Before the internet, the CIA had a special textbook on sabotage and countering sabotage in the so-called areas where all activity is banned, meaning, here. Surprisingly, the first point was to damage power transmission lines, switchboard equipment of plants, and even bulbs in apartment blocks. That was before the internet. Look, in 2002, they cut off the power in Venezuela. You were right to ask why that leaked? If it targeted us, they'd accuse us. A very cunning leak. If Russians believe it, they'll have to spend enormous resources on updating their electricity energy industry software. So, it's a regular intelligence operation.