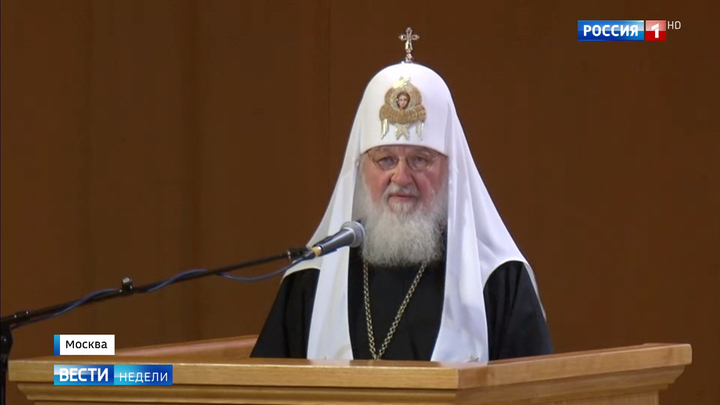 On Friday, the Christ the Savior Cathedral in Moscow hosted the opening of the 23rd World-wide Russian People's Convocation. The plenary meeting was moderated by Patriarch of Moscow and All Russia Kirill. The topic is "Saving the Nation is the Present and Future of Russia". It's no wonder that, at the same time, the Church of Greece's position on the Ukrainian dissidents became another highlight of the convocation.

Andrey Grigoryev has the details.

How do you conserve ties, not only family ties but also those connecting entire nations? How do you protect the country from both internal and external challenges? These were the topics discussed at the Christ the Savior, the metropolitan cathedral of the Russian Orthodox Church. The Patriarch of Moscow and All Russia is calling to stick to traditional Orthodox values but his words sound very alarming. There is a real challenge for Orthodox unity.

Kirill, Patriarch of Moscow and All Russia: "We have certain, reliable information that everything that is happening in the global Orthodox Church today is not accidental. It's not just a whim of this or that religious figure whose mind just got obscured, to put in mildly. This is an implementation of a very definite plan that is pursuing two goals: first, to segregating Russia from the Greek world and the Greek world from Russia".

The schism that started in Ukraine is growing larger and wider. Now, the Church of Greece, or its particular hierarchs seemingly against all canons, are ready to recognize the new Ukrainian pseudo-church structure.

Metropolitan Hierotheos: "We recognize not the autocephaly tomos but the right to issue it".

At the Greek Metropolitan's Convocation, there are ornate speeches and a violation: the decision should be adopted unanimously but only one-third of the metropolitans participated. It gave the Synodus of the Russian Orthodox Church an opportunity to just issue a warning.

Vladimir Legoyda, Moscow Patriarchy: "If someone recognized dissidents, as the Patriarch of Constantinople did, he is rupturing the living tissue of the Church with his own hands, he left the communion himself. Therefore, if any of the Church's of Greece patriarchs or even its primate adopt such a decision, then we will act accordingly"

For the first time in millennia, the walls of Athon monasteries were covered in graffiti that proclaim Ecumenical Patriarch Bartholomew to be the Antichrist. Meanwhile, he was quick to conduct a service together with the primate of the Church of Greece in Thessaloniki.

It's the main sign of recognition: the Ukrainian dissidents' head, Epiphanius, was mentioned by name during the liturgy. But Archbishop of Athens Ieronymos is keeping silent, as all Orthodox theologists have noticed.

Protoiereus Nikolay Balashov: "The primate of the Church of Greece was there. But he didn't comment on what was happening in any way. If he starts to act himself, to actively mention the dissidents' head's name, the canonical conclusions will be inevitable".

Over ten metropolitans of the Church of Greece, distinguished Metropolitan Seraphim of Kythira and Seraphim of Pireas, to name a few, categorically refused to recognize the heretics.

Kirill, Patriarch of Moscow and All Russia: "We are receiving requests to hold our ground, to continue our independent line of conduct in order to conserve the unity of worldwide Orthodoxy, and, most importantly, to conserve the spiritual independence of the Russian Orthodox Church from all these centers of global influence".

Nikolay Balashov, archpriest: "We can see unusual activity by the American foreign policy agency in this Orthodox field that is seemingly far from it. Now, we see the secretary of state who, on behalf of the United States, had welcomed the so-called autocephaly for the Ukrainian Orthodox Church, and proclaimed the State Department’s official position on this matter numerous times, come to Athens a week before the Greek bishops' council to hold important meetings".

Russia needs strengthening not just from the inside. The main highlight of the World-Wide Russian Convocation is saving the nation, or, in other words, demographics.

Kirill, Patriarch of Moscow and All Russia: "The unfavorable demographic situation is hindering Russia's economic growth, jeopardizing social guarantees for the older generation, and, in the case of continued deterioration, may lead to the loss of territory and dissolution of the state. It's not just some scary story. It's a forecast made by people who are capable, among other things, of using scientific forecasting methods".

The church is ready to help the state improve the situation. All the more so that the government is already implementing crucial measures.

Sergey Kirienko, of the presidential administration: "Vladimir Putin once said that a three-child family should become the norm in Russia. By the way, since that time, the quantity of these families has increased in Russia by over 25%, and now, there are over 1.6 million of them".

Zyuganov, leader of the Communist Party: "The issue of saving the nation is now very urgent and requires quick and smart solutions to be implemented".

The convocation has developed a strategy for 2050. If it is implemented with the participation of all state institutions and all confessions, within the next 30 years, Russia's population will grow by up to 160 million.