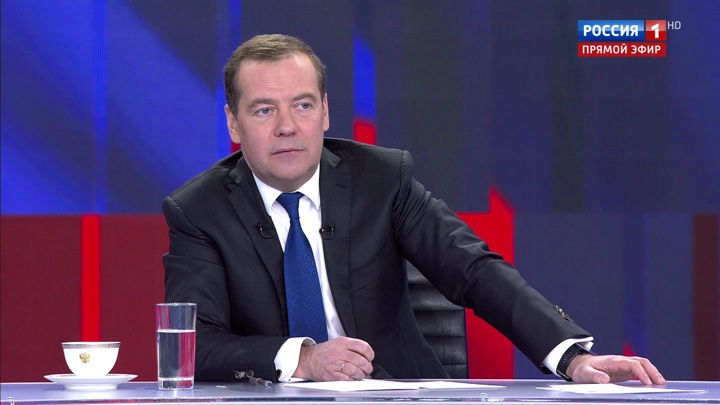 - Good afternoon, Dmitry Anatolyevich and my colleagues. By tradition, I'm going to ask the first question about the results of the year. How do you assess 2019 for the Russian economy? What has been achieved? Are there industries that should catch up to be up to par? Does the government have additional tasks? Thank you.

Dmitry Medvedev: "Greetings to everyone once again. The results of the year are always very difficult to express in several dozens of sentences. But I'll do my best. The results are always accompanied by numbers. So this might be slightly boring. But I'm going to give you them nonetheless since they perfectly describe the situation in common.

In general, our economy and social sphere have passed through this year normally and steadily. This is the main point. We all remember different years and different problems that aroused one way or another. This year our economy has developed but, probably, not at such a significant pace as we all would like it to. We expect the maximum growth to be between 1.3% and 1.5% of GDP. As a matter of fact, we expected that the start of work on national projects would be accompanied by some warming-up. We hope that the measures we've taken and are going to take will allow us to achieve steady and higher growth rates. Let me remind you that according to the well-known presidential decree and national goals, we must achieve world economic growth rates of about 3% per year. This is achievable.

As for other indicators, they are quite favorable, I'd even say they're good for our economy and, consequently, for everyone living in our country. Let's take inflation, for example. Inflation this year will be within 3.8%. This is the lowest inflation rate in the history of the Russian Federation since the formation of our country. This is not just a number of 3.8%. This means that prices vary within these limits. This means that the loan rates banks use should be based upon the real inflation rate and the Central Bank's key rate which is, in turn, based on the inflation rate. This is going to be lowered. Mortgage. Another important issue for people. It's a chance to solve housing issues. It's closely related to inflation and the key rate. That's why we're glad to see such numbers.

There is another component that is very important for the economic development of the country. It's the budget. A budget, as you know, can be deficit-ridden when its expenses exceed revenues, and this is not good, and it can be surplus when its revenues are higher than its expenses. We now have a surplus budget. We assume that the surplus will be about 1.8% of GDP. This is a very decent margin of safety which allows us to look to the future with confidence.

But I have to stress this again that a significant part of the work is yet to come. This was the year of the start of national projects and the beginning of the implementation of national development goals. Something turned out better but something turned out worse because, in some cases, the start turned out slower than we expected. All this needs to be analyzed and all the mistakes should be taken into account in the work next year. This will be connected with the policy of the Central Bank and the decisions that they will make in order to boost up our economy and bring it to a steady growth rate. Therefore, I can rightfully say that the development of our country in 2019 was quite successful".