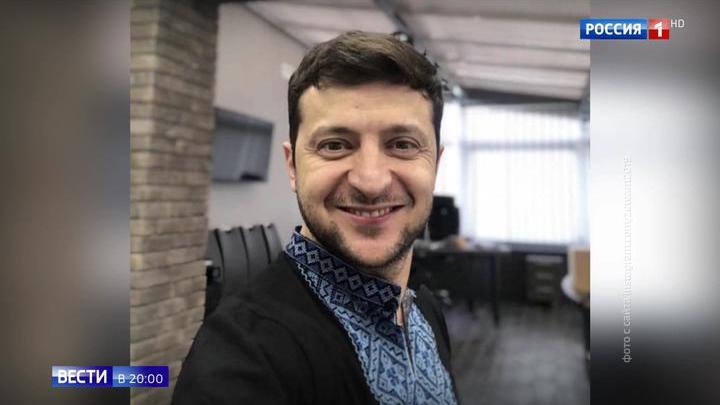 The relationship between Washington and Kiev isn't all that simple either. Ukraine is wondering if anyone from the US will come to Zelensky's inauguration. After all, Trump's personal lawyer canceled his trip. The story with the inauguration date is also unpleasant. They sent invitations for May 19th, as Zelensky wanted. And today, deputies of the Verkhovnaya Rada, dressed in vyshyvankas, scheduled the ceremony for May 20th. What motivated them? The oligarch Kolomoisky, who has returned, or a shout from abroad?

Andrey Grigoryev has the details.

"Today is the day of the vyshyvanka in Ukraine. It's a tradition to wear vyshyvankas for work today".

Presenters, correspondents, babies, monuments, and even military vehicles are wearing vyshyvankas. The flash mob, invented by students in Chernovtsy ten years ago, is now almost part of the state ideology. And Pyotr Poroshenko congratulates Ukrainians on the holiday. He's still the president of the country.

Zelensky also congratulates, but more modestly — with a photo in social networks. Ukraine has set a record in the period between the election and taking office. It's 25 days already.

The decision isn't adopted. In the Verkhovnaya Rada, not only deputies but the display panel wear vyshyvankas today. They repeatedly rejected the inauguration date proposed by Zelensky — May 19th.

Nestor Shufrich, deputy of the Verkhovnaya Rada: "They act according to the principle that they'll do not what he wants in any case. It's a kind of a nasty trick".

Zelensky's supporters threatened the gallows to intractable deputies. But they still appointed their date — May 20th. This is another reason for the president to dissolve the parliament. He has the right to do so.

On May 20th, service maintenance was supposed to be performed on Ukrainian TV. Inaugurations have never been held on Monday.

"Their decision will create a number of difficulties for Kiev residents and foreign delegations, which could have been avoided if the inauguration took place on a day off".

According to some sources, Zelensky already sent out invitations to foreign guests for May 19th. Now, it's not clear who of the invited will be able to come. NATO promised to send Assistant Secretary General Alvargonzález. The EU hasn't decided who will be present yet.

Dmitry Razumkov, adviser to Vladimir Zelensky: "Part of the Verkhovnaya Rada did what it had planned. Actually, some deputies declared that they're ready to vote for any date but not the one Vladimir Zelensky asked for".

This map shows the route of a private jet from Tel Aviv to Dnepropetrovsk. Today, the fugitive oligarch Kolomoisky returned to Ukraine. He has long been associated with the elected president. According to the Ukrainian press, Timur Mindich, the co-owner of Zelensky's Studio Kvartal 95 and a close friend and business partner of Kolomoisky at the same time. Before the second round of the elections, Mindich was seen in Kolomoisky's office in Israel several times.

- Kolomoisky brought us the new president.

- Is there some dirt on Zelensky?

- No. There's nothing compromising him. He's a horse of another color.

The team of the elected president promises to make the celebration unforgettable. In the series Servant of the People, the character of Zelensky came to his inauguration by taxi.

- Why all that pathos?

- What pathos? It can't be opened from inside.

If Ukraine elected a new parliament right now, Zelensky's party, which is called the Servant of the People, could get a majority of votes there. Another famous Ukrainian entertainer, the frontman of the Okean Elzy, Vakarchuk, is also ready to join the struggle. Today, he presented his political force in Kiev.

Svyatoslav Vakarchuk, musician: "We are the Golos (Voice) Party. We're going to the parliament to destroy the old policy and make a new policy".

Vakarchuk has just come from the US where he studied for a year under a training program for new leaders based on the Center on Democracy at Stanford.