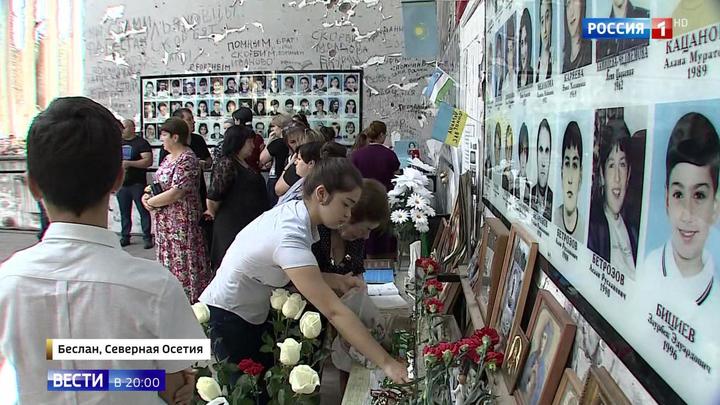 On the Day of Solidarity in the Fight against Terrorism, commemorative and mourning actions were held in Russia today. Fifteen years have passed since one of the worst tragedies in modern history. At Beslan's school N1 in the gym, where militants held over 1,000 people hostage for three days, a memorial liturgy was held today for each of the 333 dead, including 186 children. Thousands of citizens went in a procession to the memorial cemetery "City of Angels".

At 11 a.m. — the time when there were first explosions in Beslan, the bell rang in all of the churches in Yekaterinburg. A minute of silence was held at the Black Tulip memorial to honor the memory of the victims. People brought flowers and candles to the Victory Park in Omsk. There was a mourning rally and white balloons in Khabarovsk. They liberated white doves — a symbol of a peaceful sky — at the action "We're Against Terrorism" in Ufa. In Moscow, memorial events were held at 11 memorials: in every place where the attacks took place.

A memorial service for the Beslan victims was held in the Church of the Nativity of Blessed Virgin Mary in Kulishki. In Balashikha, Moscow Oblast, they laid wreaths to the memorial to the Alpha Group servicemen, who saved children from the fire of terrorists at the cost of their own lives.

Ilya Kanavin has the details of those terrible days.

There was an explosion, then another one. There was constant gunfire. It was the third day of the implausible Beslan hell. It began on September 1st, when children saw people with rifles at the school assembly.

"They ran from over there. There were three men with rifles".

How many hostages are there? How many terrorists are there? What do they want? Nothing was clear in the first few hours, except that a terrible disaster occurred.

"They were wearing black masks, they captured children. They brought them to the gym. They're there".

Civilians in small Beslan instantly took arms. Alpha and Vympel arrived. Terrorists immediately began to kill unarmed people. First, they killed the men among the hostages. They threw their bodies from the second story.

Ilya was 8 then. He came to school with his mother and older sister.

Ilya Kokaev, former student of Beslan's school N1: "Even seeing the corpses of men there on the first evening, we were still sure that this would end soon, that this was some kind of a practical joke or scenario".

The child's mind refused to believe, so Ilya didn't cry — neither when they pushed them into the gym nor when they were starving and thirsty. Bombs were hung in the gym. There were heat and sadism. The militants soaked the girls' skirts to watch how people maddened by thirst would squeeze the water into their mouths.

Margarita Simonyan, RT Editor-in-Chief: "I had a notebook. I wrote, and the letters were all blurred because I was crying. My tears fell on the paper, and the letters blurred. Then it was hard to read aloud".

- While the gunfire ceased, I can tell you what happened.

- The rescuers wanted to take the bodies of those whom the militants killed.

The main plan was to hold negotiations to release the hostages. But all of a sudden, it collapsed. They thought that the terrorists agreed to allow to take the bodies at the school's walls. Here are four rescuers carrying stretchers. Suddenly, they heard an explosion and gunfire. One of them was killed on the spot. Another one died of wounds. The gunfire was extremely loud. Half-naked children rushed toward the bullets to be saved.

"They're alive. That's dreadful. Take them inside, quickly".

When those who were saved began to talk, it got even more dreadful. Bombs were hung over the gym. When the tape tore off, a bomb fell and exploded. Everyone who could, who had time, continued to run into the gap, which appeared in the wall.

"Two bombs exploded and everything was on fire. I felt pain when they exploded".

The terrorists drove those who didn't make it deep into the school, to the cafeteria. They fired at the backs of those fleeing, threw grenades at children's feet.

Vyacheslav Bocharov was the first of the Vympel fighters to run inside the burnt school.

Vyacheslav Bocharov, Hero of Russia, Vympel fighter: “Here I saw a dead boy, about 1.5 years old. Bodies laid one over another. This wall of the gym was already on fire because of the explosion at that basketball hoop.”

A bullet hit the back of his head. He miraculously survived.

In Beslan, Alpha and Vympel suffered the biggest losses in history. It isn't only because the terrorists fired from behind the children's backs but because the fighters turned their backs to the terrorists when they carried hostages in their arms. Some didn't even have time to put on a bulletproof vest.

Valentina learned that her son was a hero at his funeral. The girl Nadya told her what he did. She survived because Andrey Turkin sacrificed his life.

The grenade was thrown at a dense crowd. Andrey rushed to it, and almost all of the projectiles hit him. It was such a nightmare in the cafeteria that it seemed impossible to survive. But they did. Nadya, whom Andrey saved, crawled from the fire with her legs broken. Ilya's sister also survived. She's now finishing her residency training.

"The vast majority of our school's graduates are doctors and teachers. The guys are border guards. They all chose that path".

Only one of the terrorists survived — Kulaev. Here he is. He'll spend the rest of his life like this.

She repeats the names of her dead classmates like a prayer. 333 people were killed in the terrorist attack.

Malvina Gigolaeva, former student of Beslan's school N1: "I live a life for myself and my classmates, who are dead. They wouldn’t like it if we burned out like candles".