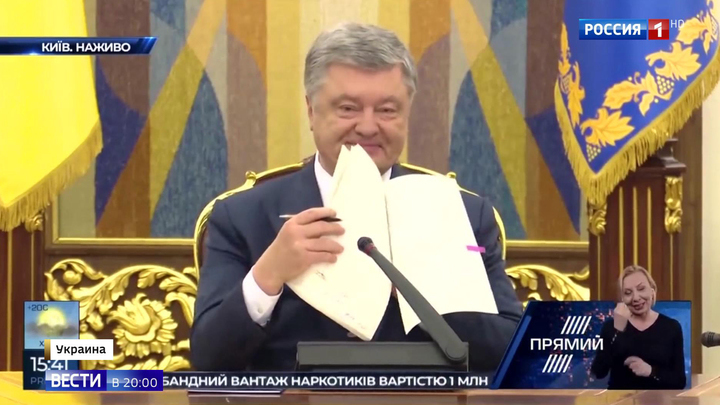 The political and religious life of Ukraine at the end of the presidency of Poroshenko, who doesn’t want to say goodbye to his office, is full of amazing signs and meanings. Today, the Verkhovnaya Rada found the strength to tackle the legalization of marijuana but failed to find some time to appoint the date for the inauguration of the new president. Today, the government announced a decisive struggle with Russian plywood. But it feels that the unity of Poroshenko's front isn't the way it used to be. And even the schismatic Filaret began to take revenge on the president.

Nikolay Vasiliev has the details.

Pyotr Poroshenko, President of Ukraine: "It's a great honor for me to put my signature here".

The law now prohibits the use of the native languages ​​of almost half of the population of Ukraine: Russian, Romanian, Hungarian, Polish, and Slovak. Even Poroshenko can't explain how to implement the ban. They say that his language initiative will fail.

Another part of the election triad — faith — started to fall apart in less than six months. Epiphanius, the head of the so-called Orthodox Church of Ukraine, was considered a protege of Filaret, the former self-proclaimed patriarch. But since the Tomos on Autocephaly was given to Epiphanius and Poroshenko in Istanbul, the main schismatics of Ukraine, the former and the current, have never appeared together anywhere.

Mikhail Denisenko (Filaret): "Poroshenko promised one thing but he does another thing. We agreed that after getting the tomos, I, as a patriarch, will run the church in Ukraine, and Metropolitan Epiphanius will represent the church outside the country".

Only the nominal title was left to the excommunicated Filaret. And the honorary false patriarch decided to restore the false Kiev Patriarchate, which was dissolved for the sake of the Turkish tomos.

Sergey Dumenko (Epiphanius): "This is His Holiness Patriarch Filaret's opinion. But the Kiev Patriarchate won't come back, as it may lead to the loss of the tomos".

Istanbul still helps Epiphanius hold on. It also helps him with organizing — here's Archpriest Daniil accompanying the schismatic on his trip to Mariupol, and with money — Daniil brought money from Turkey for humanitarian aid, as they claim. Filaret doesn't seem to value the tomos or his former mentee. Poroshenko's electoral project with the autocephaly doesn't seem to bother him.

But the agony of the outgoing secular authorities of Ukraine is growing. The cabinet of ministers announced new anti-Russian sanctions.

Vladimir Groysman, Prime Minister of Ukraine: "We will do everything to become strong, no matter how hard it is. Unfortunately, we had very close economic ties, both in the times of the USSR and until 2014".

The close ties didn't include Russian coal, coke, gasoline, liquefied gas, and drugs to the list of sanctions. But Ukraine proudly refused leaf springs for carriages of railway cars and plywood. Making ridiculous decisions at last, Poroshenko's team manages to delay the inauguration of the new president.

Dmitry Razumkov, advisor to Vladimir Zelensky: "At the meeting, the chair of the parliament said to the newly elected president that the vote for the inauguration date will be held on May 14th".

Vladimir Zelensky proposed to schedule the inauguration for May 19th. But the MPs didn't even begin to discuss this issue.

Oleg Lyashko, leader of the Radical Party: "Tomorrow will be a great day — Vyshyvanka (embroidered shirt) Day. We should carry out the inauguration on this wonderful day".

On Vyshyvanka Day, the elected president won't manage to become the current one for sure. Chairman of the Verkhovna Rada Parubiy hinted that the inauguration date will be appointed on Thursday.

There were a lot of journalists at the Ukrainian embassy in Moscow today. Along with human rights activists and volunteers, dozens of people decided to remind Ukrainian diplomats that today is the first anniversary of the arrest of the director of RIA Novosti's Ukraine branch Kirill Vyshinsky. They continue to detain him despite the groundless and absurd accusations.

Dmitry Kiselyov, Head of the news agency Rossiya Segodnya: "I think that they watch everything happening here from those windows with those drapes, of course. And we're sending a sincere and open signal to the Ukrainian authorities that it would be great to have a fresh start in the relations with Russia".