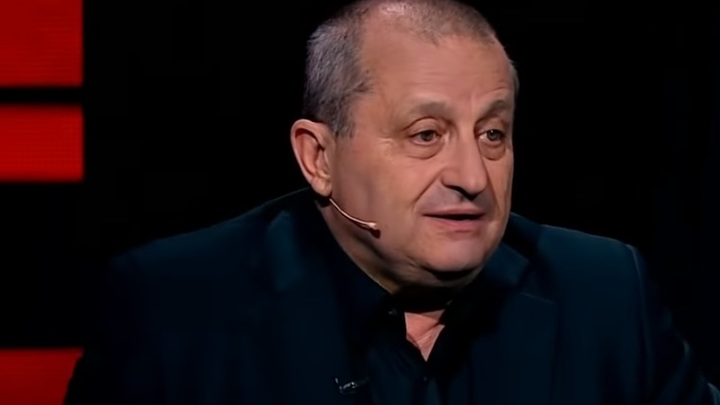 Yakov Kedmi, civic leader, Israel: I've got something to add. Firstly, Putin spoke harshly and to the point, but he didn't say everything, probably for his own diplomatic reasons. He called a spade a spade in all cases but for one. And I guess he understands it. The US policies towards Russia and China is unequivocal. It wants these two states as they are now to collapse. He didn't mention that. But this is a fact. The US strategic goal is to make Russia collapse just as it is. It's another question of what kind of Russia they want to see. But the goal has remained back since the Soviet Union. It's the same for China. What testifies to it besides military pressure, economic pressure is what the USA is saying. Delegitimization of the current Russian authorities. Delegitimization of the current Chinese authorities. It's omnipresent, in many contexts, more or less. As for the economic pressure on Russia, I don't quite agree with what your president said.

- You won't be prosecuted for this. We are a free democratic nation. Everybody is free to speak their mind. And this is a broad discussion, like Valdai.

- Vladimir, I have a strange personality. Even when I was prosecuted for my statements in certain countries, it didn't prevent me from speaking my mind anyway. Especially in today's Russia.

Sanctions aim to undermine the Russian economy, hinder its development, especially in the fields which can boost Russia's development as a country. That's what I want to say. And this is the case with China. If one of China's economic locomotives is hi-tech, that's what the USA is hitting now. If for Russia it is the development of new technologies and a financial base, as you don't have one as big as the US has, and the energy sector, that's what it's hitting by capturing markets.

My second point is that only a few people noticed. Putin said the main thing in the world is sovereignty. Coupled with his statement saying that Russia has no intention of uniting with Belarus, or Ukraine, or any other post-Soviet country, it makes Putin's message clear: "Don't be afraid." Modern Russia has no aspiration to restore the old Soviet boundaries, no matter whether or not he mentioned the Baltic, Central Asian, or Caucasian states. It reflects his opinion and the vision of the Russian leadership of a normal world order with good-neighboring relations when everybody respects each other. If Russia's rivals do their best to organize a military foothold in one or several post-Soviet countries to deliver a blow at Russia, will Russia remain so reserved or not?

In his speech, Putin mentioned certain global problems, in a negative way, associating them with the USA. Firstly, it's the US desire to spread its understanding of law over the whole world. I mean that it creates laws for all countries. Judging by Putin's words, it's unacceptable for Russia. Secondly, he stressed that the dollar had got an increasingly destructive tool of world politics. Besides, what is interesting is his structured attitude to the economy. It's the manufacturing-based, not trade and finance economy, that is vital for the future. This is what the current economy rests on. If Russia believes that it isn't effective and entails crises, it needs to change and Russia will contribute to it. As for the regional economy, it's another issue. For Russia, the regional economy is the most profitable, but why? It implies that this economy primarily involves the countries that are located in a certain geographical area. Russia is so big that it is present on almost all the continents but for Africa. And Russia is involved there. And the USA, in terms of the regional economy, only connects with Mexico and Canada, and, perhaps, Latin America. It explains its efforts to enhance local economic unions as opposed to the global economy. According to the USA, the global economy isn't supposed to help other countries develop and involve them all, but is about one hegemon, the USA, reigning in all the countries' economies.

Secondly, I'd like to mention Xi Jinping. Little attention has been paid to it, but this factor is important. Over the past 15 years, Americans have waged an intensive psychological and information war, or hybrid war, mostly through special services, in order to split Russia and China instead of choosing a more logical way, that is, to improve relations with Russia as opposed to China. But they decided to follow their regular pattern. "We won't give Russia anything, we'll scare it with China." This information war exploiting the topic of an alleged Chinese threat to Russia and all the world is ongoing. I feel it in Israel and in all the world. It stems from the US intelligence. When Xi Jinping arrived, he had two messages for the United States. China leagues with Russia against all odds. Speaking about the struggle of two tigers, he isn't completely a monkey watching them from the side. He made himself clear: "We're with Russia." All his visit, its program, testifies to it. But there's also the other side. Russia is with China. Russia is with China, and that's what Americans need to understand. China's strategic goal in the domestic market is to change the economy in such a way that 90% of its population is urban. To date, it's only 55%. Everybody understands what it all means for the world and the world economy. Some are afraid of it. Secondly, it's about China's historical memory. Both these small islands and Taiwan are the Chinese territories. It goes without saying. It's up to Beijing to decide when they return to China. It's also clear, given the idea "Russia is with us." It's a clear signal to the US. China pursues its own goals.

Finally, Putin stressed two international entities which he considers important and indispensable. These are the UN and G20. He didn't even mention all these G7, G8 or G6. Russia considers these two entities as crucial and the only ones to coordinate international politics and economy. Russia doesn't pay attention to any others.