Top Pundit Mikheev: America Blew It! US Won the World, But Refused to Build a Just Peace! 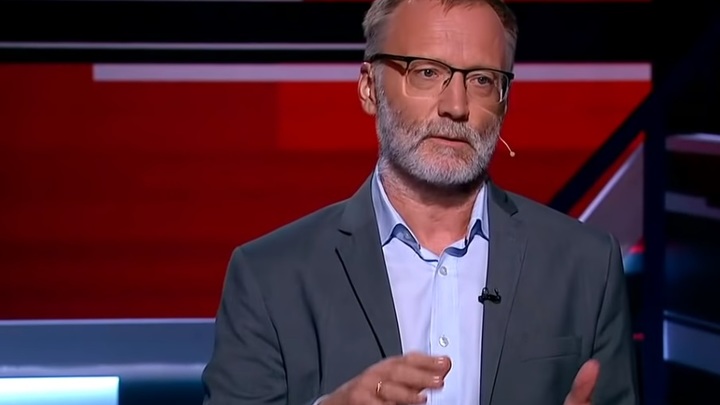 Sergey Mikheev, political analyst: As for negotiations and conferences, you know, of course, there's always a desire to say: let's be friends, let's finally agree, why have we been fighting with each other for centuries? But unfortunately, Western civilization promotes the logic of war, in my view. Why? Because, in our lives, we saw how in 1991, a unique historic chance to agree on a new world order for idealists and romantics, in my view, appeared. You know, they say: be afraid of your desires, as they come true. The West wanted to be the unquestionable leader, the monopolistic governor of the world. And it became it. If you wish, God gave it that and said: you're the leader, what do you propose? What do you, America, propose to the world? And what did America propose to the world? Nothing. Fig sign. It came up with the logic of war and said: "I'm winner, you're the loser." "I'm the winner and you the loser".

- Victory in the Cold War.

- It's the logic of war. They didn't come up with the logic of peace. They didn't come up with a new, harmonious world order. They didn't say: "we've won, we succeeded, but from this moment, let's set world history on a new track. A new start." Could they come up with something like this? No. Actually, we saw that the West didn't have enough intelligence, imagination, heart, or spirit to come up with anything at all. And it stated only that it was the winner and that we're losers, and that they have a right to plunder that world. Thus, they continued the traditional, centuries-old logic of war for a number of years into the future. Why can't we agree with the Americans about anything now? It's because the Americans feel like leaders and don't want to lose that leadership. They felt on the top of the world in the 90s and don't want to back away from that. They don't want to agree about anything with anyone at all. It'd be good to agree but we can't. There's nobody to agree with. Actually, there's no counter-party. With whom are you going to talk? With Trump? About what? Or Obama? About what? What is it possible to talk about with anyone there? They don't see negotiators because they don't see a threat to themselves. They don't see a threat to themselves. They talk a lot about how the Russian threat exists. They talk a lot about how there's some threat. But they realize that a certain complex of issues, not threats, exists. They're a difficulty but aren't fatal for them. They aren't fatal. If they aren't fatal, in the conditions of the dollar-based financial system, they don't care about anyone. Whom should they be afraid of? Tell me whom in this world Americans should be afraid of so much that they hold any radical negotiations with anyone, go for some serious transformation of the world. Whom should they be afraid of and why should they talk about anything with us? Explain to me why they need that. Imagine that we're Americans, who should they talk to and about what? Yes, we have good weapons. But in the current situation, it only means that they can't beat us by military means. But they're not afraid. They don't see a threat to them from us. They don't see it from China either. There's a number of issues connected with production and the economy, first and foremost, and so on, but many things are compensated and will long be compensated with the monopoly of the dollar. They'll be compensated for a long time. Therefore, the solutions are very simple.

Yes, we can talk about conferences, humanitarian cooperation, but then, there are simple things. If you want peace, prepare for war. This is my first point. They should realize that any military attempts to solve that issue will fail. Secondly, science and production have significance, too. But we should also get rid of our dependence on the dollar. All of the problems the Americans are now creating for us are connected to one thing. It isn't military power, any infrastructure issues, but one thing — we depend on the dollar-based system. If we exclude our dependence on the dollar-based system, then tell me, why would we need the Americans?

- What do planes have to do with it?

- Will our own spacecraft appear immediately?

- They'll be there the next day.

- Will we have the equipment that Huawei has?

- Wait, it's a rhetoric question. Nothing will appear the next day. One can destroy something the next day. We've already said that science and production are necessary to create something. But if you're a part of that dollar-based system, you're always on the hook.

- That isn't the only problem.

Sergey Stankevich, political analyst: And the main tool of sanctions is the dollar. It's the dollar.

Dmitry Drobnitsky, political analyst: I don't know about making them a fetish, but the president said the following things in Saint Petersburg. He talked about the origin of the crisis we discuss, why we can't agree. Actually, there are agents but there isn't a subject matter. It's because globalization, or international trade as Mr. Putin called it, has exhausted itself as a driver of growth.

- Realizing that I'm in a club of militarists and fans of brutal force, I'll still talk about two necessary conferences. The first one is on the prevention of war, the most probable scenario of war in Europe is the deployment of American intermediate-range and short-range missiles not only on the territory of Europe but in Ukraine, which is quite possible especially when the decision to provide Ukraine with the status of the main partner of America outside of NATO is taken. This scenario is absolutely possible. Therefore, we should think about holding a conference on a ban to deploy intermediate-range and short-range missiles in Europe, seeking support from European partners. There are those who share our views.

- And my second point is... I've no time. And my second point is that on the first day of the Saint Petersburg Economic Forum, the Russian president raised a very interesting topic. Now, there are about 20 countries in the world that either openly or secretly possess nuclear weapons or have become closer to acquiring them. We should invite those countries to discuss how we can keep nuclear weapons under control so that they don't proliferate further and appeared in the hands of irresponsible thugs. It's a sound idea. Therefore, a conference on maintaining control over nuclear weapons and nuclear energy, with all of the countries that have them participating, is a very sound idea. Remember these two conferences. I think that they'll be held in the coming years.

- I'm against conferences, let me say that at once. I wanted to say that before Stankevich, now I have to do it after him. How can't we remember Yevgeny Maksimovich Primakov if we talk about the Primakov Readings? On the day when he ordered the plane to turn around and went to Bonn, I was part of the group that met him. I was in a group of journalists and I saw that situation. Actually, I realized then that there was the sole opportunity and probably the most realistic opportunity to influence some world events simply by ordering a plane to turn around. Primakov demonstrated it. Unfortunately, the leadership didn't support him then and he didn't achieve what he wanted. But I think that the current situation in the world is determined not by states but rather personalities. And we can see it in many examples, including the example of the Russian president. I think that what Yevgeny Maksimovich demonstrated then was demonstrated very clearly. One can change the world situation by one action, one decision, in a way that no conference can do. I just want to have leaders in our world, who are able to make such decisions, to take responsibility, and then, conferences simply won't be necessary.

Sergey Mikheev, political analyst: As for conferences, I'm not against any conferences. Don't consider all of us to be militarists here, because war is the last thing we should do. Of course, I think that we'll be prepared for it. Nevertheless, as for conferences, let's come down to practice. Imagine that tomorrow, Vladimir Putin says, using your words, Mr. Stankevich, let's hold an international conference on the most important international issues. And there's silence. What'll happen? The Americans and their allies from NATO would probably say "you know, such a conference could be held, but you should do this and that first, and then we'll maybe consider your proposal." In the best-case scenario, we'll be able to gather the other half of the world at such a conference. Then, there'll be a confrontation, in any case. Then, there'll still be lines of demarcation and conflicts. As for technology, I'm not against technology. Yes, technology is extremely important, but in the late 19th and early 20th centuries, the world was crazy about new technology, too. It seemed that the world was absolutely different, too. The world was absolutely different. Then, there was WWI and WWII — the two most terrible wars in human history. Of course, the world is changing, but humanity doesn't change. That's the problem. Therefore, if you want peace, prepare for war. You can't avoid it.

Dmitry Drobnitsky, political analyst: I'm not against technology, I'm not against a stronger defense. What patriot of Russia would be against it? The thing is different. If we discuss how to prevent a new large war, there are only two options to prevent a new large war. The first option is to be really afraid of war. This option doesn't suit us, unfortunately. The second option is progress. It's progress that all of humanity needs. It's impossible to reach, acting on one's own. Actually, for this…

- Then there's the third option — a threat to all of humanity.

- Actually, yes. By the way, it's the option between war and progress. It's when all of humanity is simultaneously fighting against some external threat. By the way, there were such attempts when they fabricated NASA's data about a threat of asteroid. Such an idea took place. Nevertheless, how can we direct the world toward progress and not the escalation of tension, the natural escalation of tension when a new technological race is underway, isn't a question for diplomacy. Before diplomacy works at conferences, the foreign political strategy works. It's the business of not only foreign policy departments but serious think-tanks. The call to think was on purpose. It calls not to do, but to think about how to do it at least. It was voiced to a circle of serious people. And the question of how we should work on the foreign policy strategy, how to create those meanings, I'm not afraid to say so, is the most important and serious thing now.

- And what should we think about?

Sergey Mikheev, political analyst: I understood, we support it in general. I don't believe in progress. You talk about strategies, in fact, it's the business of philosophers. They've approached it repeatedly. And they dropped it at different stages of technological development. Therefore, our contradiction is only that I don't believe in progress. I don't see progress, I see the progress of technology. I don't see the progress of humanity, human relationships, the essence of social connections, and so on. Therefore, unfortunately, everything repeats but on a new technological stage.