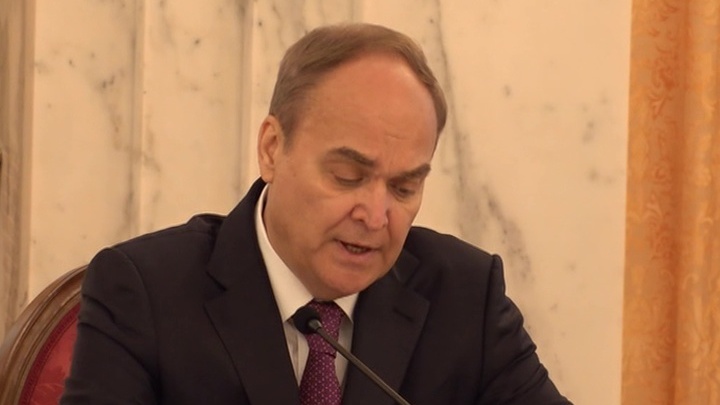 - Please tell us — we can't but assess the American policy on third-party territories, for example, in Syria and other countries in the Middle East. Several months ago, you told us about provocative acts being prepared against Russia by the White Helmets, an organization working on Syria's territory that has already made it into the history of information wars with their numerous dark deeds. What warnings can a Russian diplomat in the US make now when American troops are hastily being withdrawn from Syria for an unclear reason? What shall we prepare for? How will it reflect on the political infighting in the United States of America? What can those who stay in Syria expect?

Anatoly Antonov, Russian Ambassador to the US: First, the whole international community needs to confirm its adherence to the integrity and independence of the Syrian State. Any actions aimed at undermining this guiding principle are, of course, unacceptable. The international community has produced several suggestions, including suggestions under the well-known UN Security Council Resolution 2254, that must be executed. Events on Syrian territory occur so fast now, so unpredictably, that today it's difficult to say for sure how this situation will be developing in the future.

But we, for our part, have said several times that it's important to carefully treat the balance of interests that we observe today on the territory of Syria. Today, I'd like to draw your attention to the fact that we keep in close contact with Americans. They aren't very official, open; we speak about them only a little, but they did appear in the press.

I'd like to draw your attention to two recent conversations of defense officials of the RF and the US. It hasn't happened for a very long time. Despite the Russian embassy's attempts to organize such a phone call between the Russian Minister of Defense and the former Secretary of Defense General Mattis, we failed to do it. Today such talks did take place. There're confidential talks between chiefs of defense. We proceed from the fact that the belligerent sides, the sides who take part in the events, that we observe in Syria, will take reasonable actions, not aimed at escalating, but, vice versa, at stabilizing this situation to divert negotiations to Geneva, first of all, under the forthcoming consultation. And, of course, the so-called Astana format will take place.