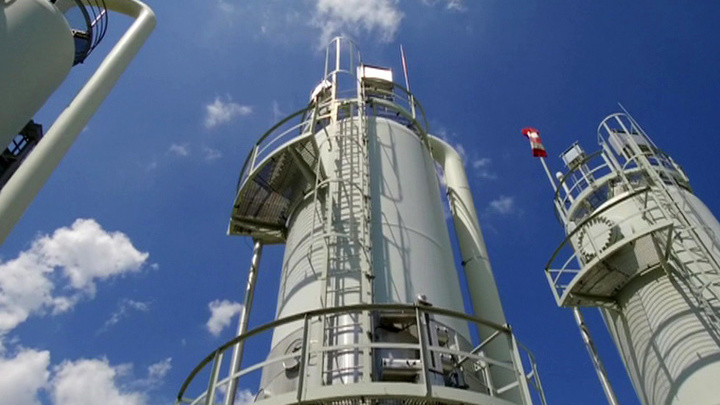 Today Vladimir Putin sets off for Austria for talks. It's the President's first foreign visit after reelection. On the eve of it, the head of state had an interview with Austria’s TV and radio company.

Pavel Zarubin is reporting on it.

The relations of Russia and Europe celebrate a great anniversary: For 50 years Russian gas is supplied to Baumgarten, Austria, via this pipeline to be further transported to 6 countries. For all these years, the supply was uninterrupted despite any political or economic earthquakes. This hub annually transmits 45 billion cubic meters of gas to Europe. The Russian-Austrian cooperation is to be discussed today during Vladimir Putin's visit. The night before the main Austrian TV channel featured an interview with the Russian President. Apparently, the Austrian journalist chose to base the conversation on all the rumors about Russia and Europe he ever heard.

Armin Wolf, journalist: "Many observers believe that the Russian leadership would like to maintain links with nationalist parties through United Russia because they want to divide the European Union".

Vladimir Putin: "You should ask this question to the Russian Prime Minister Mr. Medvedev, who is the party leader. But this is what I can say with a fair degree of certainty. It is not our aim to divide anything or anybody in the EU. We don't need a further decline. We keep 40 percent of our gold and currency reserves in the euro. Why should we shake up all of this, including the single European currency as derives from shaking the Union? I'd like people in Austria and in the other European Union countries to put this idea out of their heads".

Journalist Armin Wolf obviously, wasn't going to get anything out of his head. He actually didn't just ask questions but made categorical statements, often interrupting Putin. That was the case with the Malaysian Boeing shot down.

Armin Wolf, journalist: "Would it not be better to admit that the missile had indeed come from Russia and that Russia supplied weapons to the rebels in the east of Ukraine?"

Vladimir Putin: “If you collect all your patience and let me finish, you will find out my view on this issue. Okay? So, both sides use Russian-made weapons, and the Russian army has exactly the same systems the experts are talking about, just the same, which were certainly also manufactured in the former Soviet Union or in Russia. The commission doesn't listen to us. Conversely, the Ukrainian side, which is a party interested in the results of the investigation, has access to it. Meanwhile, it is responsible at least for failing to prohibit civilian aircraft to fly in the conflict zone in violation of ICAO’s international norms.”

In his questions, the journalist stressed that the referendum in Crimea hadn't complied with the Ukrainian Constitution, but he suddenly stopped making judgments when Putin reminded him of the Maidan in Kiev.

Vladimir Putin: It was an unconstitutional armed coup and seizure of power. Yes or no? Can you tell me?

Armin Wolf, journalist: I am not an expert on the Ukrainian Constitution.

— What should happen for Russia to return Crimea to Ukraine?

— There are no such conditions and there can never be.

Putin highlighted that the referendum in Crimea had been set by the Supreme Council formed under the Ukrainian laws and that the Russian military that had always been present on the peninsula had just kept order.

Vladimir Putin: Our Armed Forces were there... Let me finish, for God’s sake. [Speaks German] Would you be so kind as to let me say anything?

— I hate to interrupt you, but it is about uniformed fighters without insignia.

— I will get to this, please be patient.

— We have little time but a lot of questions.

— Yes, we have enough time. Our servicemen had always been stationed there. But, when unconstitutional actions in Ukraine began to unfold, what did our Armed Forces do? They ensured the independent free elections.

— But the annexation of Crimea was the first time a country in Europe annexed part of another country against its will.

The President made it clear that such double standards are typical of the Western media and politicians regarding the situation in Syria. Total reluctance to deal with it and find the truth, which has been reconfirmed by the recent story with the chemical attack.

Vladimir Putin: "We found parents and children who had got hosed down, and who said they had had no idea of what had been happening. We brought them to the Hague to show them, but everyone refused to listen to them. And then you tell me everyone agrees the chemical weapons were used. Not everyone. We believe this news to be fake, and it was used to justify the strikes. And the strikes violated international law. It was an act of aggression towards a sovereign state. Who gave the permission to strike a sovereign state? Did the UNSC give its permission? No. Thus, it's aggression".

However, many European capitals and Washington keep insisting that it's Russia that is aggressive; And alleged Russian hackers, according to the Western politicians, supposedly determine almost every key event on the planet.

— These so-called troll factories are owned by Evgeny Prigozhin, you know him very well, he is known as 'Putin’s chef.'

— You've just said Mr. Prigozhin is called 'Putin's chef.' He really does run a restaurant business in St. Petersburg. Now, let me ask you this. Do you really believe that a person who's in the restaurant business, even if this person has some hacking opportunities and owns a private firm engaged in this activity — I do not even know what he does — could use it to sway elections in the United States or a European country? Could it be that the information and political standards in the countries of the consolidated West have been driven down to such a low level that a Russian restaurant keeper can sway voters in a European country or the United States? Isn't that ridiculous?

Meanwhile, the Austrian interviewer wasn't much interested in Russia's domestic situation. And, when he did show interest, his phrasing was predictable, as the interview showed.

— Some people say you're like a Tsar here. Is that true?

— No, it isn't true. Of course, it isn't. This isn't the case at all, we live in a democratic state. We all live in compliance with the current Constitution.

— After you serve your Presidential term, will you leave politics? Or will you remain in the Office, becoming the Prime Minister?

— What would you like me to do? My Presidential term has just begun. This is just the beginning of the path. Let's not get ahead of ourselves. I've never violated the Constitution of my country, and I don't plan to do it in the future.

— Then, allow me to ask you one last question. There are many partially nude pictures of you. That's rather unusual for a country's leader.

— Well, they are partially nude, not fully nude, thank God. If I'm on vacation, I don't think I must hide behind the bushes. I don't see anything wrong about it.

This specific Austrian journalist's attitude hardly determines Austria's attitude in general. The country's top leaders have mentioned many times that it's necessary to cancel anti-Russian sanctions. And, amid the increasing confrontation of the EU and the US, there are calls for getting the relationship with Russia back on track as soon as possible.