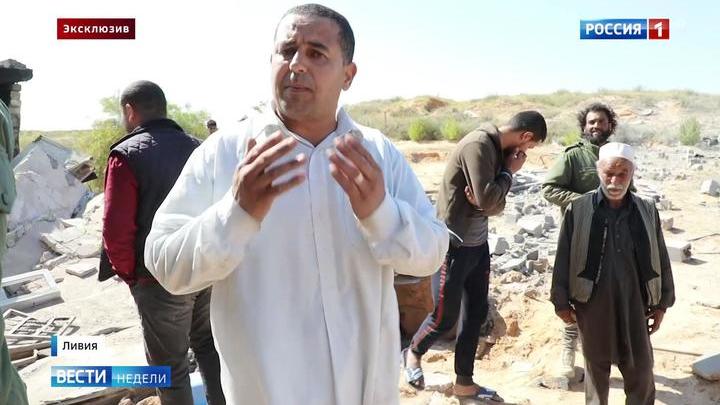 On Tuesday, the head of Libya’s parliament, Aguila Saleh, following the representatives of the majority of the Libyan tribes, voiced his support for Marshal Haftar's actions against the terrorists. Everyone wants the war to end soon so that a political process for integrating the country will start. Meanwhile, Marshal and his army laid siege to the capital of Tripoli in his aspiration to put an end to the diarchy in the country. Resistance is coming from a mixed aggregation of forces of the Government of National Accord headed by Fayez Al-Sarraj who is supported by the West and recognized by the U.N.

Our military correspondent, Evgeniy Poddubnyi, is covering the current events near Tripoli.

Every day, the fighters of the groups who answer to the government in Tripoli sweep the residential quarters of the Libyan capital's suburbs. This is the consequence of this sweeping. As the result of a shell hitting a house, a mother and a child died.

"Fighters of the Libyan Army have come to give us a sense of security, and we support our army. Today, I witnessed an airstrike. I wasn't hurt but my neighbors died right in front of me".

It's usual scenery for places that have seen several waves of warfare. This is the Tripoli International Airport, or what is left of it. The forces of the National Libyan Army, under the command by Marshal Haftar, seized control over the terminal almost immediately after it became known that the troops were approaching Tripoli. It was, perhaps, the most outstanding public success of the assault operation, which has lasted for almost two months.

Our film crew, together with fighters of the National Libyan Army, are on the front-line. The fighters of Libya’s armed forces that answer to Marshal Haftar are shooting at the fighters from the radical groups with large-caliber machine-guns. General Al-Hassi is the one in charge of the assault of the capital, he's Marshal Haftar's comrade-in-arms, a professional military man. By the way, back in Soviet times, he attended classes for foreigners at a VDV school in Ryazan. The commander of the West Task Force within the Libyan National Army says that it's impossible to organize a political process in Libya for a political settlement. The influence of the radical groups on the government in Tripoli is too strong.

Abdulsalam Al-Hassi, Commander: "As soon as we capture Tripoli, we'll bring stability and order to the Libyan capital. Unlawful armed formations will be liquidated, and we'll protect the secular state. Now, the government in Tripoli is under control of the radical groups of fighters, in such a state, the government cannot maintain Libya’s stability and bring the country to peace".

Now, the forces of the Government of National Accord comprise mostly of fighters from Misrata, some of them being members of the terrorist organization the Muslim Brotherhood, some coming from the local part of Al-Qaeda. There are even radicals who had fought on the side of the so-called Islamic State. They're supported by Turkey, Qatar, and Italy, by providing them with funding, weapon, and training. This vehicle was captured by the fighters of the country's armed forces during the fighting in the Libyan capital. The pickup contains several boxes of man-portable air-defense systems. It's not a secret that the weapons used by terrorist groups in Libya are often sent to the radicals who operate in Syria, Iraq, and other countries in the Middle East. Now, the advance by of the Libyan National Army's forces has slowed down. The commandment failed to carry out a fast campaign. Now, the soldiers are trying to entirely block Tripoli to cut the supply routes for ammunition, weapons, and fuel.